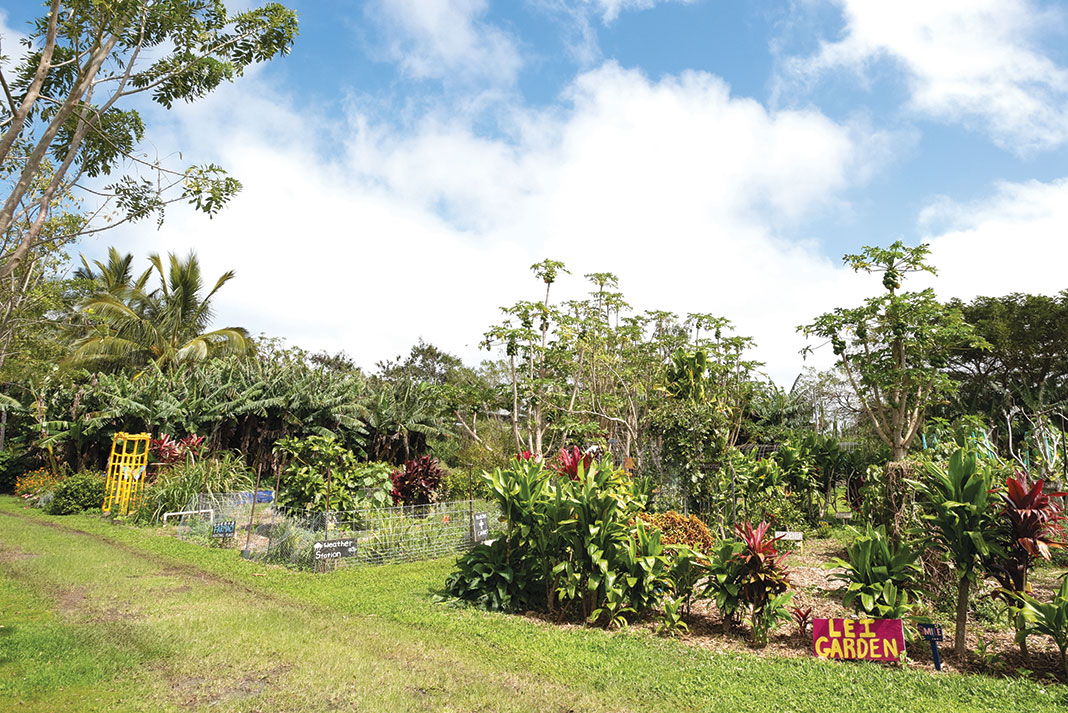 On a rainy afternoon, at the top of a quiet Upcountry lane, half a dozen laughing children dressed in rain slickers and hoodies frolic across the lawn, greeting the adults they know (and a few they don’t) with hugs and cries of “Hi, Auntie!” Alongside the narrow paved road, pastel blue and green plantation-style homes, framed by lush stands of ti and brightly painted flowerboxes, form a snapshot of 1950s Maui, when doors were left unlocked and keiki (children) roamed carefree. But this is 2019 and The Maui Farm is no ordinary neighborhood.

Trina DeLima lives in one of those homes with her ten-year-old daughter and five-year-old son. We meet in the farm’s communal hall, called Hale ‘Ike (House of Knowledge), where current and former residents, board members and staff have gathered to talk about the work being done here.

“I came here from the Women Helping Women shelter,” Trina says. “I had no confidence. I was broken down. I hadn’t had a job for so many years; the domestic [abuse] at home made me believe that I couldn’t accomplish anything.” Then she smiles. “Here, I got to work on me. Here, I’m safe.”

The Maui Farm opened in 1993 as a group home for foster children, nearly a decade after its inception at a kitchen-table discussion. Among those early brainstormers were Chuck and Marlene Powell, who had noticed that the children they fostered at their rural home thrived on contact with farm animals and the daily chores of farm life. From this seed the nonprofit Maui Farm sprouted.

The late Hannibal Tavares, then mayor of Maui County, was an early supporter. Tavares had visited Boys Town in Nebraska, and, impressed by the success of its residential program, helped arrange a long-term lease of County property to The Maui Farm at $1 per year. County grants and private and corporate donations funded the construction of two five-bedroom, three-bath homes where the first teenaged clients resided, cared for and guided by live-in foster parents.

Before its doors opened—even before the doors were built, in fact—The Maui Farm hired Paula Ambre as executive director, and Donna Vida as program director, to turn the board’s concept into a viable program. Under their leadership, dozens of at-risk teens thrived, in body and in spirit, on the farm.

But by 2005, despite The Maui Farm’s demonstrated success, Hawai‘i’s state Department of Human Services had shifted its support—and funding—away from group homes for youth, in favor of individual foster-care placement. Convinced that the farm-based residential program was too valuable to abandon, Paula and the board of directors expanded its vision to serve mothers and children threatened with homelessness due to domestic violence. Over the years, the farm’s mission has remained the same: to incorporate values and establish roles and responsibilities within an ‘ohana (family) setting that nurtures harmony, empowerment, and a sense of belonging.

The Maui Farm works with organizations and agencies that focus on crisis intervention, stepping in when families are ready to transition from shelter to community. Some, like Trina’s, arrive after being referred by Women Helping Women, others from agencies like Mālama Family Recovery Center and the Maui Family Court Drug Court.