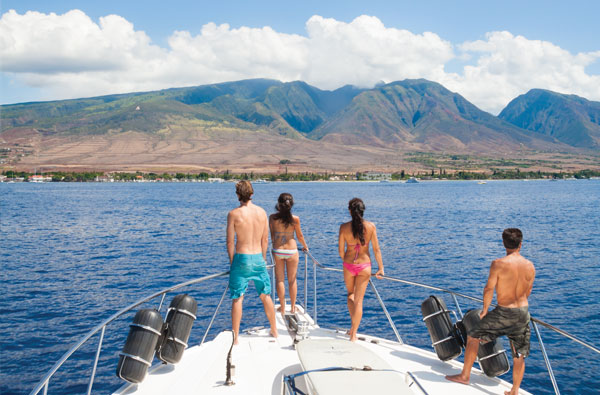 It’s a day of possibilities.

I have a sleek fifty-foot yacht at my command for four hours. “If you can think of it, we can put it together,” says Adam Quinn, president of Jayhawk, LLC. He and Captain Steve Schulz will be our hosts for the day.

Quinn has devised a simple yet glorious morning for the eight of us, all Maui residents with a passion for being in and on the water: deep-sea fishing, snorkeling, stand-up paddling, and food and drink to quench the appetites that are sure to follow. We congregate at the Lahaina Yacht Harbor, step aboard the Jayhawk, and gather inside the main cabin for bagels, pastries, salmon, fruit, fresh coffee . . . and a safety briefing.

How do you top living some 2,500 miles from the nearest continental landmass, on an island that consistently ranks among the best in the world? Answer: ramp up the isolation factor. A sandy spot off the east coast of Lana‘i will be our launching station for water-based recreation.

On the way, we fish for mahimahi and ono. Or perhaps it’s more accurate to say the Jayhawk fishes. Schulz fits four Shimano rods with neon-colored, squidlike lures. Outrigger poles help lift and spread the trolling lines beyond the boat’s wash. In case we get a hit, Schulz offers a quick lesson in how to land a big fish. He emphasizes using the whole body while seated in the fighting chair, a seat bolted to the back deck to help an angler maintain constant pressure on the fish while reeling it in. With a marlin or monster yellowfin tuna, it can be a multihour battle. “Remember,” Schultz cautions, “it’s called fishing, not catching.” 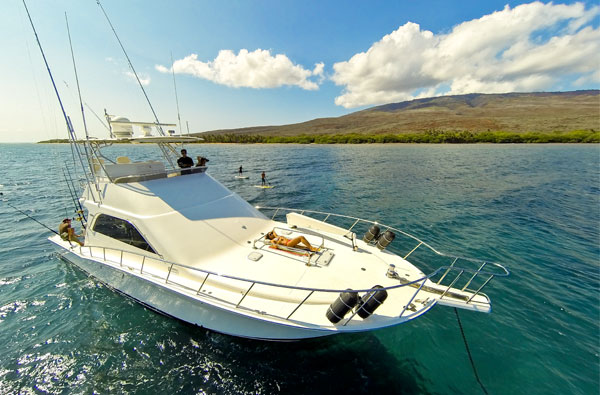 The day is stellar, not just cloudless and calm, but one of exceptional visibility. From partway across the ʻAu‘au Channel, Moloka‘i and Lana‘i seem to triangulate O‘ahu up from the northwest horizon, feeding the sense that anything is within reach.

I claim the second seat on the flying bridge to learn more about the boat from our captain. With a tall muscular frame, silver close-cropped hair and bronzy weathered face, Schulz looks like he was born for the role. The boat’s only captain, he was also its chief architect. While working on Lana‘i, Schulz struck up a friendship with Kansas City businessman Tom Grant, a camaraderie that deepened over a fondness for all things nautical and an agreement to partner on a boat Schulz kept at the Lana‘i harbor. When Grant decided it was time for an upgrade, he asked Schulz to figure out the details.

Like a chef carefully selecting ingredients for the evening’s menu, Schulz considered not just where the boat might take them, but how to ensure that the components would sync to create a top-shelf ride along the way. With twin 1100 HP diesel engines to power the boat, the Jayhawk has seen the shore of every island in the main Hawaiian chain; it can charge the Big Island in just three hours. The floor plan includes three staterooms, two baths, lounging areas in the main cabin and in front of the bridge, and a sound system to rock the fishes. Such live-aboard comforts make it easy to imagine a multiday adventure. The boat has hosted numerous celebrities, but Schulz shows more enthusiasm describing trips of epic fishing tournaments or the sweetness of a honeymooning couple who slipped away from their wedding party for a stargazing midnight ride.

Jayhawk’s purchase didn’t start out as a commercial venture, but the old saw about boats being holes in the water into which you pour money applies equally to luxury yacht and small skiff. Owner and captain found a perfect match in Adam Quinn, who markets the charters and features the boat in his own aptly named business, Adventure Quinn, which offers personalized travel arrangements.

Like all boat names, Jayhawk has a history. This one comes from Grant’s multigenerational ties to the University of Kansas. The school’s mascot and athletic teams are called the Jayhawks, a name also synonymous with Kansans.

Toto, I’ve a feeling we’re not in Kansas anymore. 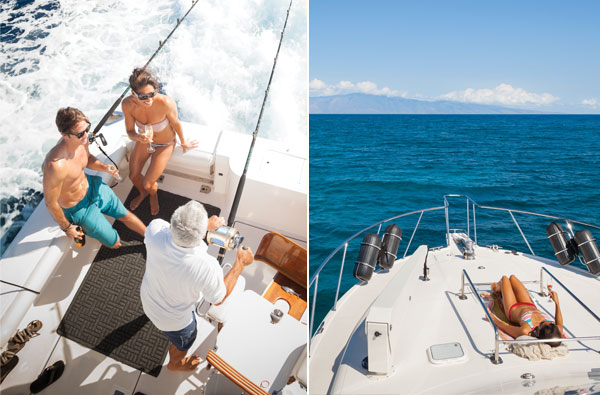 We’re facing the northeast shore of Lana‘i near Kahalepalaoa, the old Club Lana‘i location, where boats once ferried guests from Maui for day excursions. From sandy beaches, the land rises steeply; gulches carve deep furrows into this side of the shield volcano. Local families still visit spots along the coast to fish, dive and camp, but besides a glimpse of a skeleton pier, nary a soul, boat, car, structure or other evidence of humankind is visible from our ocean vantage. The island’s new owner plans to build a full-scale resort at the old location. Today, however, the coast belongs to us.

The captain’s reminder about fishing proves prophetic as the lines come in. Despite Jayhawk’s photo album of smiling guests flanked by huge marlin and iridescent mahi, we will return unburdened by fresh filets. I don’t begrudge the fish another day of swimming free, knowing that truly dedicated fishers would have started at or before daybreak. I’m just as happy to strap on mask, snorkel and fins, step off the back deck and join them as a cohabitant rather than predator.

Another kind of action is happening topside, as the paddleboards come out. From my snorkeler’s viewpoint, the water seems calm as I watch Dino Tassara paddle circles around the boat. Then it’s my turn, and I try to stand up. “Look where you want to go,” Dino counsels as I pull myself back onto the board after my second spill. “If you look down, that’s where you’re headed.” I must be mesmerized by my wobbly feet, as the stand-up part of this activity continues to consist of a few forward bursts followed a splashy return to the water. I know I will try again and master this way of being in the water. For now, as I climb back aboard the boat, I find solace in knowing that the chop has increased, that Tassara is an award-winning SUP paddleboarder, and that anʿono (delicious) lunch awaits.

All too soon it’s anchors aweigh. As we approach Lahaina Harbor, Captain Schulz goes full throttle, leaving rooster tails in our wake. Back at the slip, we linger over chocolate, as if to delay reentry to life on terra firma. Inspired by the world of options our hosts have created, and a sense of coves, beaches, and other islands left unexplored, I recall a line from an Emily Dickinson poem: “The Possible’s slow fuse is lit by the Imagination.” A perfect summation of the day’s experience and the promise of future adventure.