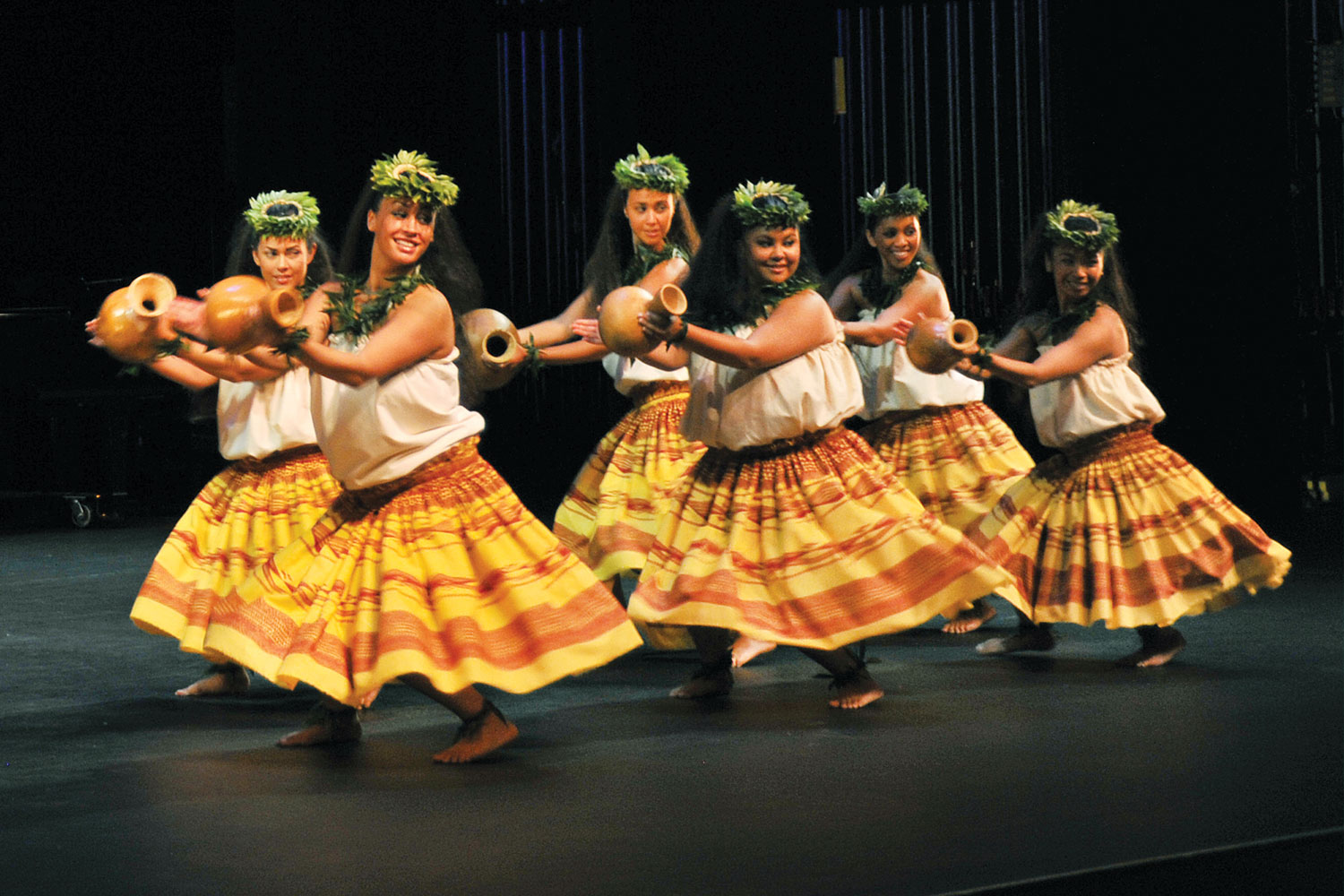 At the 2014 Merrie Monarch Festival, the dancers of Hula Hālau ‘O Kamuela astonished the audience with a hula that incorporated rarely seen traditional instruments. Chanting melodiously, Kau‘ionālani Kamana‘o strode onto the stage, carrying an enormous staff. The handsome young kumu hula (hula teacher) stamped his staff against the floor, and struck it repeatedly with a small stick. As the clear peal of native kauila wood rang out, 30 dancers flowed from the four corners of the stage to its center. Each dancer placed a papa hehi (wooden treadle) at her feet, and raised a pair of kālā‘au (percussive sticks). Swaying as one, the dancers clacked their sticks against their neighbor’s, and tapped a second rhythm on the treadles. Each tap reverberated through the auditorium like the Earth’s own heartbeat.

The sounds of hula kahiko, the oldest style of Hawaiian dance, are deep, resonant and hypnotic. In contrast to modern hula (which is typically accompanied by Western-derived stringed instruments, such as the slack-key guitar or ‘ukulele), ancient hula is purely percussive. Hula kahiko dancers often make their own music, and, as I discovered while watching Hula Hālau ‘O Kamuela, the sounds are as significant as the movements. The creation and mastery of traditional hula implements is both an art and a sacred practice passed down through generations.

To learn more, I consulted with Hōkūlani Holt. She comes from a long line of kumu hula, and has the regal carriage and natural expressiveness of a lifelong hula practitioner. Trained by her mother, the renowned Leiana Long Woodside, Holt opened her own hālau (school), Pa‘u O Hi‘iaka, in the 1970s. Her students now learn as she did, first to move their bodies with fluid precision and then to handle instruments.

Novices start with the kālā‘au, learning to strike them so that they ring, rather than thunk, says Holt. Next up are pū‘ili, split bamboo sticks that produce marvelous rustling sounds when brushed against the body. Performing with feather gourd rattles, ‘ulī‘ulī, builds arm muscles, says Holt. “Your hands have to twist. You have to hang on so the gourds don’t fly away, and you have to shake them hard.” 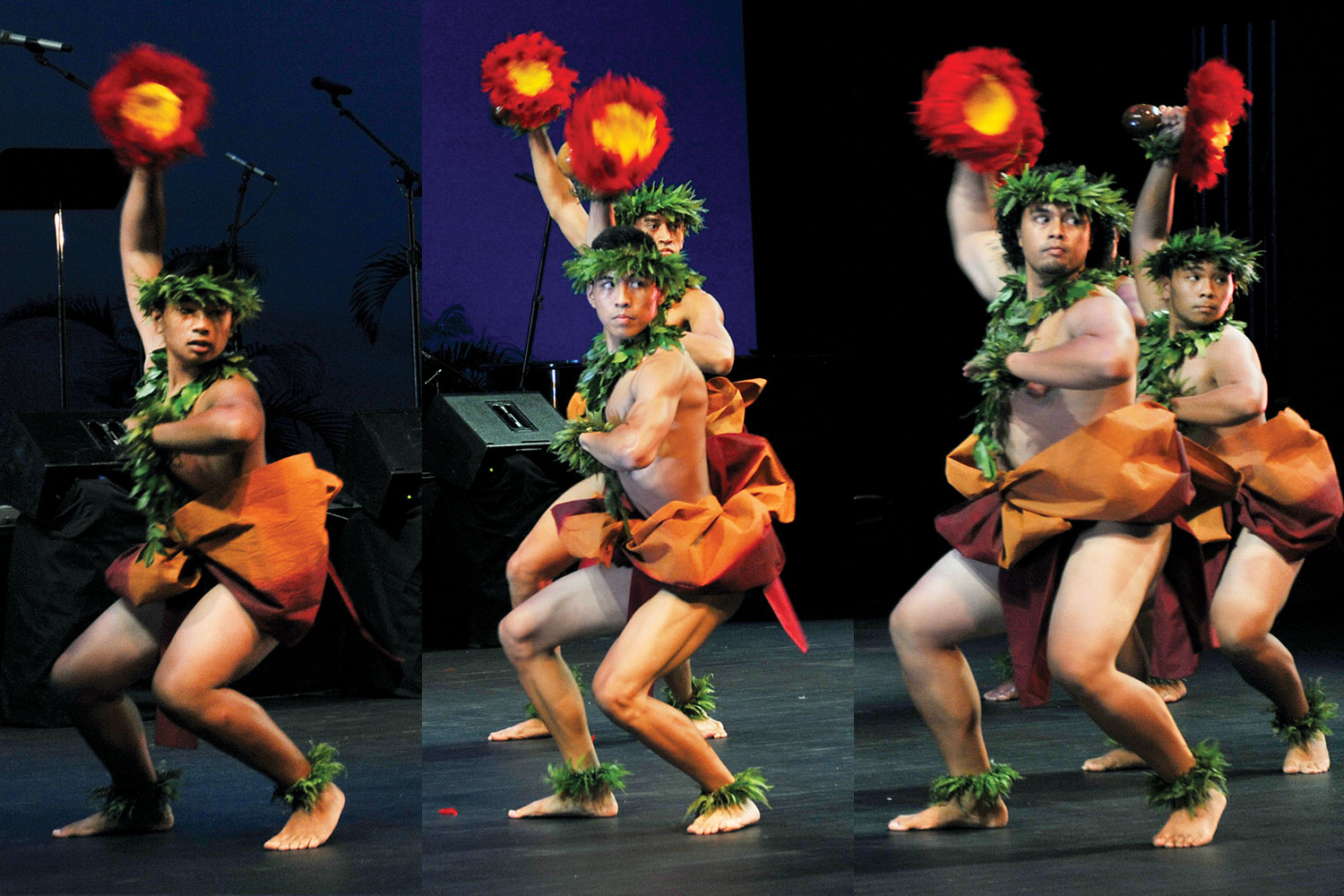 Dancing in the tight formation characteristic of hula kahiko requires profound proprioception — a sense of one’s body in relation to others. It’s a skill that likely informs a hula practitioner’s life on and off the stage. When mastered, dancers’ movements appear as effortless as a school of fish surging with the current, or the multiple petals of a single flower opening to the sun. Adding instruments engages an appreciable level of difficulty and depth.

The papa hehi that so impressed me are reserved for advanced dancers, who can simultaneously tap out separate rhythms with their hands and feet, perform complex choreographies and chant. The concentration required is mind-boggling.

Kumu hula play the primary hula instruments: the pahu, a large, deep-voiced drum carved from the trunk of a coconut or breadfruit tree, and the ipu heke, a drum formed out of two joined gourds. The rhythmic drumbeats dictate the pace of the performance.

Kumu hula are simultaneously composers, choreographers and directors. They select a historic chant, or compose one of their own, and then create
choreography, costumes and music to tell its story. The accompanying instruments serve multiple purposes: the drums, rattles and percussive sticks stimulate the audience with rousing beats, help the dancers stay synchronized, and offer visual clues that complement the storytelling. A kumu might incorporate feathered ‘ulī‘ulī in a song about forest birds, or ‘ili‘ili (polished river stones, played like castanets) to bring the sound of mountain streams to the stage. Staffs evoke warfare, farming or thunderstorms. 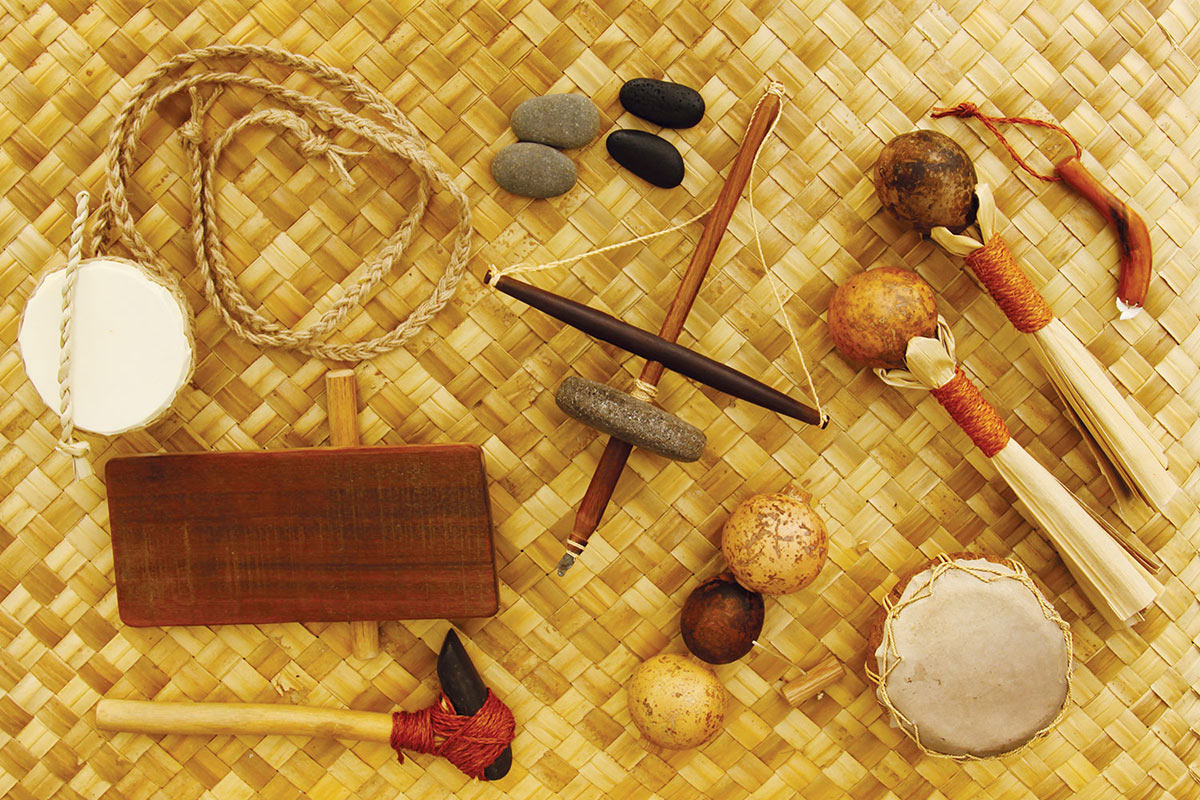 On a deeper level, the materials from which the instruments are made — plants, rocks, shells, feathers and animal skins — reinforce the dancers’ connection to their natural environment. For example, a drum cover made from sharkskin contains the mana (spiritual power) of the shark.

“The sounds that emanate from the pahu or ipu heke are the voices of the ancestors and gods,” says Holt. “The mana of the kumu and the mana that resides in the implements create sounds that harken back to the beginning of time.”

Hula dancers seeking to attain kumu status must handcraft his or her own drum. Kapono‘ai Molitau got a head start, fashioning his first drum at age nine. His makua hānai (adoptive) father, John Lake, inducted him early into the ancient art. Lake was a revered kumu hula and champion of Hawaiian cultural practices who taught his dancers to make their own costumes, lei and implements.

Molitau’s first attempt was a pūniu, the small knee drum played during seated dances. The boy husked and sanded a coconut shell to form the drum’s chamber, stretched wet goatskin across the top and lashed it down with jute cordage. He was so smitten with his drum that he painted it to look “antique.” His father, a stickler for authenticity (and humility), shared it with his hālau as an example of what not to do.

Molitau still has the unfortunately embellished pūniu, as hula custom dictates. Your first implement embodies what you learned, he says. “Each time you make a new drum, go back and look at your first one. Recall the lessons.”

Molitau is a large man with broad hands and bright eyes that soften when he smiles. Like his father before him, Molitau serves as kahuna nui (high priest) of the Big Island’s Pu‘ukoholā Heiau, the largest temple in all of Hawai‘i. He teaches Hawaiian language at Kamehameha Schools’ Maui campus and leads a hālau, Na Hanona Kulike ‘O Pi‘ilani.

I met with him at Native Intelligence, his Hawaiian specialty store in Wailuku. It’s a trove of indigenous Hawaiian objects — everything from feather lei to gorgeous gourd drums, all of which he crafts himself. The gold-and-black-speckled ipu heke have a slight sheen; he finishes them with oil rather than varnish.

“I love making these,” he says, admiring his pieces as if they were his children. And, in fact, he views them as such.

Molitau’s students learn to make — or birth — hula implements the traditional way. They follow cultural protocols, ask the akua (gods) for permission to collect raw materials, spend painstaking hours fashioning cordage out of hau tree bark, and start from scratch if it snaps midway. His last class wove hau cords 95 feet long for their drum lashings. Then they took their completed drums up to the summit of Haleakalā to bless them on the summer solstice.

Molitau once choreographed a dance using a little-known Hawaiian instrument called the oeoe — a hollow gourd the size of a chicken egg tied to a length of twine. When spun in front of the body like a propeller, it emits a soft, pulsing whistle, like wind ricocheting through trees or an owl’s twilight call.

“The wind, makani, is an influential part of who we are,” says Molitau. “It is our ancestors just beyond the veil that we cannot see.” On the island of Kaho‘olawe, he says, there’s a place where 152 winds meet. Molitau’s ancestors had names for each of them, though only a dozen are still known. When you stand there, he says, “winds come up your toes, up the back of your spine, all over you, just embracing you.”

He stands, untangles his oeoe string and begins whirling the gourd in the air. Softly he chants the names of the 12 winds he knows personally. For a moment, the store drops away and we are standing on the red soil of Kaho‘olawe, buffeted by invisible forces. This is the power of hula.

In 1994, Gayle Miyaguchi took a bumper crop of gourds to Happy Hula Supplies, which at the time was Maui’s main source of hula gear. Instead of buying her gourds, the owner sold Miyaguchi the business, which she renamed Na Kani O Hula, the sounds of hula.

For decades, she and husband Kent Apo handcrafted and sold traditional Hawaiian instruments at their farm in Kula to dancers around the world, and they were best known for their beautiful gourds. Ipu arrived in Hawai‘i along with the Polynesian voyaging canoes, but few people grow them today. They’re a difficult crop; fruit flies sting them, birds peck them and tropical rains rot the shells before they can harden. But Miyaguchi had an extra-green thumb where ipu were concerned. She would visit them in the fields every day to turn them over, ensuring each one grew fat and round, not lopsided.

“In the old days, a family would choose one special gourd, name it and care for it
like a child,” said Miyaguchi. Ipu take four months to grow and just as long to dry. Scraping the insides clean was always Apo’s job. He perfected it, using special tools that he invented to reach through a gourd’s narrow neck.

Though the couple retired in 2016, new owners Kapono and Kanoe Kamaunu bought the business, and will continue the tradition of handcrafting hula instruments for hālau around the world.