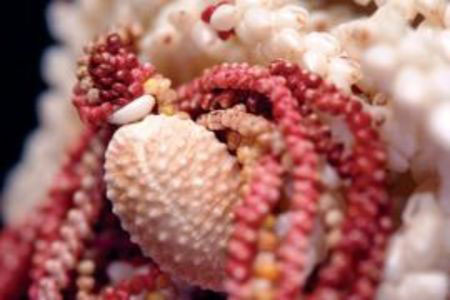 The lei that Kalei Aloha wears around her neck is worth thousands of dollars. It’s a lei that took her years to make-a waist-length bounty of white, brown, pink and gold pupu that she takes with her wherever she goes. Someday, it will be passed on to one of her seven children, just as she was given lei by her mother and by her auntie on her wedding day.

Born and raised on Ni’ihau, Aloha started learning the art of lei pupu at a very young age. She would go with her family to the windswept beaches to “pick pupu,” lying on her stomach for hours in the hot sun. She quickly learned how to spot the delicate types of shells in the sand: the oval-shaped momi ‘o ke kai, or pearl of the sea, sometimes pure white, sometimes almost black. The prized kahelelani-named after an ancient chief of Ni’ihau-tiny turban shells less than five millimeters across, with colors ranging from soft pink to deep brown. The laiki, like lustrous grains of rice, used to make the traditional wedding lei of Ni’ihau women, sometimes with strands reaching to their knees.

The lei are family heirlooms, so valuable they are even used among the island’s inhabitants as collateral for major purchases.

“Kahelelani are the only shells in the world that gemologists will grade and use for insurance purposes,” says K-La’n Curley-Rohde, manager of Maui Hands gallery in Pa’ia, which carries Maui’s largest selection of Ni’ihau shell lei. Prices there start at $235 for a single-strand lei momi, and go up to $15,000 for an elaborate, five-strand lei roselani, composed of thousands of shells that took three years to collect.

“When we buy, we look for how the lei is strung, if the shells are strung evenly, if there is a nice balance to it,” says Curley-Rohde. “Color is very important, especially with the kahelelani.” Gallery owner Panna Speas is meticulous about the quality of the collection, buying only genuine Ni’ihau shell lei-a product that is becoming increasingly rare.

Ni’ihau is a private island with a population of 160, mostly of pure Native Hawaiian descent. The seventy-two-square-mile island located off the southwestern tip of Kaua’i is part of Kaua’i County but has been privately owned since 1864, first by the Sinclair and now by the Robinson family. The family’s cattle ranch once employed many Ni’ihau men, but today, with most of its operations ceased, residents are increasingly dependent on federal welfare and selling the precious lei for their livelihood.

As residents get older, the population is slowly dwindling. With no cars or electricity, it’s a way of life that seems too sedate for many of the younger generation. Paired with the migration of younger residents is a decreasing quantity of pupu washing up on the beaches, the result of changing ocean conditions.

Although the tiny shells can also be found on the islands of Kaua’i, Moloka’i and Lana’i, they have always been the most abundant and of the finest quality on Ni’ihau. The island has no rivers running into the ocean, carrying pollution or debris, and the surrounding coral beds remain unspoiled and untouched by outside influences, allowing the pupu to develop their prized shine and delicacy.

Pollution can not only roughen the shells, but endanger the health of their miniscule inhabitants, causing a gradual decline in the number of shells. The resulting scarcity of authentic lei is driving prices upward, even as awareness of the art form rises.

Betty Lou Kam, vice president of the Bishop Museum’s Cultural Resources division, says she sees plenty of interest from the public about the Ni’ihau pupu. The museum  has hosted events where people can bring in their lei to determine their authenticity.

“When you look at a Ni’ihau shell, it’s so small,” Kam says, “but when you see them strung all together, they are tremendously beautiful, like stars in the sky. There’s a little bit of magic to them.”

She describes photographs taken in the 1800s of Queen Emma and Queen Kapi’olani wearing lei pupu ‘o Ni’ihau-“strands and strands, just spilling down. These shells may be found in the ocean, found in the sand, but they are worn by ali’i [royalty].”

The museum’s collection is mostly kept in storage, but is pulled out on occasion-padded trays of lei pupu ‘o Ni’ihau of all colors and styles, some pristine, some in need of repair, some simply bags of shells and string; but all with that unmistakable luster. For collections manager Maile Drake, the lei are not only beautiful but represent “a whole lot of work.” “You can imagine the hours and hours of collecting, sorting, stringing-you can see the patience there,” she says.

Creating the lei is a part of everyday life for the island’s female residents, and even for some of the men. Once gathered, the pupu must be sorted by type, size and quality. Then, minute grains of sand are removed and the shells carefully pierced with a sharp awl. Many shells-as many as one out of five of the tiny kahelelani-break during this process, according to Aloha. She rubs together her calloused thumb and forefinger as evidence of years of painstaking labor.

“Stringing is more fun!” Kalei Aloha  says. This is where the lei makers can get creative, displaying styles from the traditional lei kui pololei, which use a single thread; to the newer styles like lei kui poepoe, which has a ropelike appearance.

Because of Ni’ihau’s dry, dusty climate, there are few tropical blooms on the island. But residents don’t miss the flowers when they have the pupu. Instead of wearing fragrant flower lei that yellow and die, the women adorn themselves for church, for special occasions, or even for every day with shell lei woven in symmetrical patterns to resemble flowers: pikake, helekonia, crown flower. To celebrate a festive event, men too might wear a lei-typically a heavier design woven from larger shells like ‘alïlea or poleho.

Very few outsiders are allowed to visit the island; fortunately, learning about the lei pupu is not restricted to Ni’ihau residents. Lei makers from Ni’ihau make regular trips to cultural festivals on the other islands, sharing their age-old art on Maui in presentations at the Maui Arts & Cultural Center, ‘Tis the Season Christmas House in Kahului, and each Easter weekend at the Celebration of the Arts at the Ritz-Carlton, Kapalua.

Aloha now lives on O’ahu, where her husband works for Hawaiian Airlines. She travels among the islands as a representative of the Ni’ihau shell lei makers. Her soft voice is wistful when she speaks of her native island. “I wish I could be there and work on the shells every day,” she says.

Every day except Sunday-a day of rest on this deeply religious island. “On Sundays, we don’t fish or work or make lei. We wear [the lei] to church, then we go home and visit with family,” Aloha says. “You’re happy when you’re making lei; it’s not something you’ve got to do. It’s always a happy time doing it.”

Maybe that quiet happiness is why making the lei pupu ‘o Ni’ihau has sustained a people for centuries.

Shuzo Uemoto’s photographs appeared in Pupu ‘o Ni’ihau by Linda Moriarty, the catalog for a 2001 exhibit at the Honolulu Academy of Arts. The soft-cover book is available through the Academy Shop, (808) 532-8703; www.honoluluacademy.org.