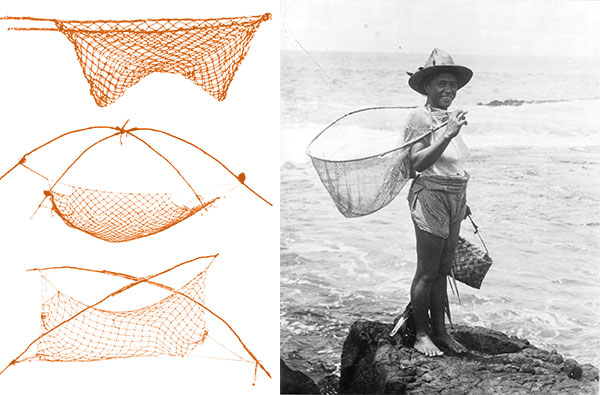 The old ways of net making required more than just the right material and skill. Before a fisherman placed a new net in the water, he prepared a feast, with prayers to the gods or ‘aumakua (deified ancestors). As described by Kamakau, after such a feast the fisherman’s dreams would foretell the next day’s fortune: hopefully canoes laden with fish. After a successful harvest, the fisherman went first to the fishing shrine (ko‘a), offering some of his catch to the ‘aumakua.

Sagawinit maintains the tradition of sharing. “I don’t go out and sell my fish. I’m more happy giving it to my children, family, friends.” A net might take him six to seven weeks to complete and could fetch $600; he is as likely to it give away to fundraisers in Hana or Ke‘anae as he is to sell it.

But he objects to limitations placed on his historical gathering rights, an issue that engenders heated debate even among traditional practitioners. Today, monofilament line, powerboats, winches, and longer, deeper nets than those used by ka po‘e kahiko help define a fisherman’s success. Current regulations specify mesh size, net length and depth, prohibit night fishing with lay nets, and establish quotas for certain species. The restrictions are designed to halt declining fish stocks and reduce unintended by-catch, but may conflict with customs practiced for generations.

Like olona, the tough and resilient Sagawinit seems resolute. “I’m a shoreline fisherman,” he says. “My culture tells me that is who I am.” And like the once-revered plant, now made scarce by an altered environment, his world has changed, but his nets will continue to tell an ancient story. 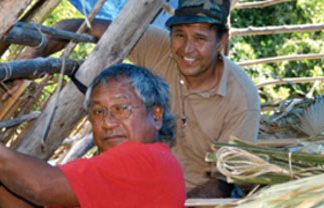 Virtually extinct for over a century, hale—traditional Hawaiian houses—are making a comeback with the new millennium.