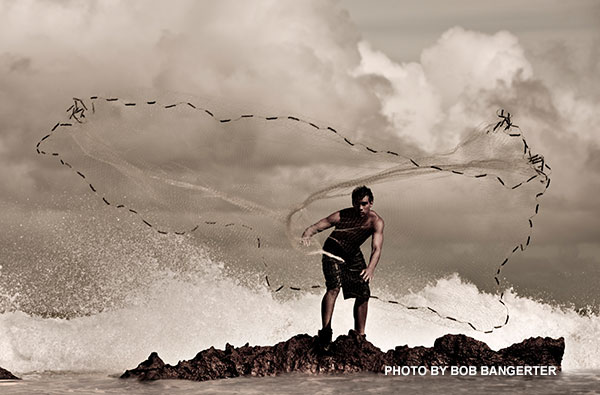 Regardless of the type of net, all who participated received a share of the catch. Writing in 1869, Samuel Kamakau explained why the lead fisherman’s wife received her own share: “Over her chafed thighs the cords for the nets had been twisted.”

Traditionally, fishing skills passed from grandfather to grandson. The custom had waned by the time of Sagawinit’s youth, but he found teachers. His mentor was an old man whose sons weren’t interested in fishing. After school, the two would walk from Sagawinit’s home to the Pa‘uwela Lighthouse, some 2.5 miles distant, not returning until night. While he learned fishing techniques from this neighbor, his godfather taught him how to make nets. On weekends, his brothers and sisters headed to the old Ha‘iku theater, but not Sagawinit. “I just stayed home and learned how to weave my nets.”

His craft still occupies much of the family home. A lobster trap, his own design, dangles from the ceiling; a hanging net drapes the entry wall, dried and decorative sea creatures stuck in its mesh. A throw net in process dominates a corner of the living room. Sagawinit crafts most of his own tools, but uses modern materials such as aluminum for shuttles and recycled lead for weights. The monofilament line he employs for the mesh is no doubt less expensive than the old standard, olona.

The fiber of the olona plant (Touchardia latifolia) ranks among the strongest in the natural world. It doesn’t kink or soak up water, and is salt resistant; some fifty-year-old nets are still in excellent condition. Maui ethnobotanist Cathy Davenport studied the plant’s elongation capabilities against hau and coconut, two other fibers also used for cordage; olona outperformed both. Davenport says, “A quick snap will break cordage, but cordage that can stretch will not break as readily. From royalty to fisherman, all greatly valued the fiber. [It is] soft and strong at the same time for the feather capes of royalty handed down through generations, yet stretching when wet just enough to counter the lunges of large fish caught by the fiber.” According to Davenport, “Olona needs cold running streams and rivulets where its roots can ramble, but the streams have so little water in them now. The natural wonders of Hawai‘i are losing their unique habitat and becoming scarce. It’s very difficult to duplicate the environment that olona needs to grow.”

So favored was this plant, Hawaiians once venerated it as a lesser deity. Never abundant, the unassuming shrub grows sparingly in deep, cool, moist places, and, like taro, its patches acquired individual names and were passed from father to son. In the 1870s, King Kalakaua collected taxes inolona and sold it at high prices to Swiss climbers. Olona has another royal connection. According to legend, Alapa‘i, the ruling chief of Hawai‘i Island, had ordered the infant Kamehameha killed to avert a prophecy that the child would one day usurp his rule. Kamehameha was secreted to the mountains, where he was suckled by a woman whose daily task was to scrape the plant’s fleshy pulp from its outer bark. To avoid suspicion that might arise from nursing two newborns, she hid her own child in a huge pile of olona fibers, thereby helping to secure the destiny of Hawai‘i’s first king. 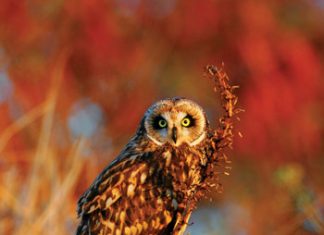