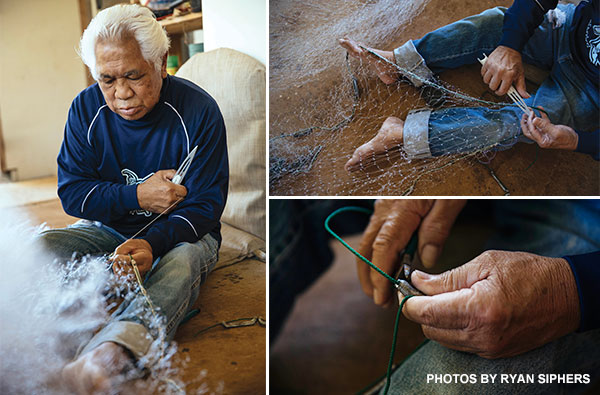 James Sagawinit is at his kitchen table in one of the two houses he built in Ha‘iku, but everything about him speaks of the sea. His hair sweeps back from the sides of his face like the crest of a wave blown by offshore winds. His gaze is distant, not in this room, scanning the horizon for where to place his net, find his fish. His voice is slow and measured, like a low, unhurried swell telling an ancient, recurring story.

I ha‘aheo no ka lawai‘a i ka lako i ka ‘upena
The fisherman may well be proud when well supplied with nets.

Ka po‘e kahiko, the old Hawaiians, had an intimate knowledge of the haunts and behaviors of their favored fish and employed a variety of net types and strategies to catch them. Inshore, a single man could handle a scoop net, while a deep-water expedition might require a flotilla of twenty canoes with dozens of helpers. Some forays called for “matured-nose” or experienced fishermen. Many canoes would paddle to the fishing grounds, where the lead fisherman spat chewed kukui nut onto the water to calm and clear the surface. He would lower a blackened hardwood stick rubbed with coconut meat, kukui-nut oil and other strong-scented materials. After many curious fish gathered to nibble the tasty stick, he would signal to the canoes to drop the large net; other men would slip into the water to corral the fish.

In shallow-water net fishing, the technique called for many people to pa‘ipa‘i, or slap the water to chase the fishes.

In kaka uhu fishing, a line tied through the gill opening and mouth of a live uhu (parrotfish) turned it into a seductive decoy. While keeping his canoe pointed into the wind, the fisherman lowered his hapless siren into the water to entice other uhu. When he saw that his trickery was working, he carefully positioned the dip net, a rectangular piece of mesh tied to arched ends of two crossed sticks suspended from a line. When the net was pulled up quickly, the weight of the catch formed a bag around the unsuspecting fish. 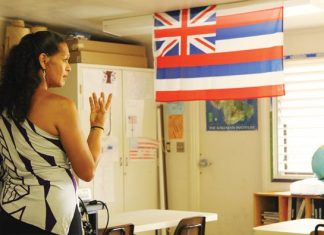 A revolution is happening in Island schools, as Hawaiian-immersion students find the keys to unlock their culture.