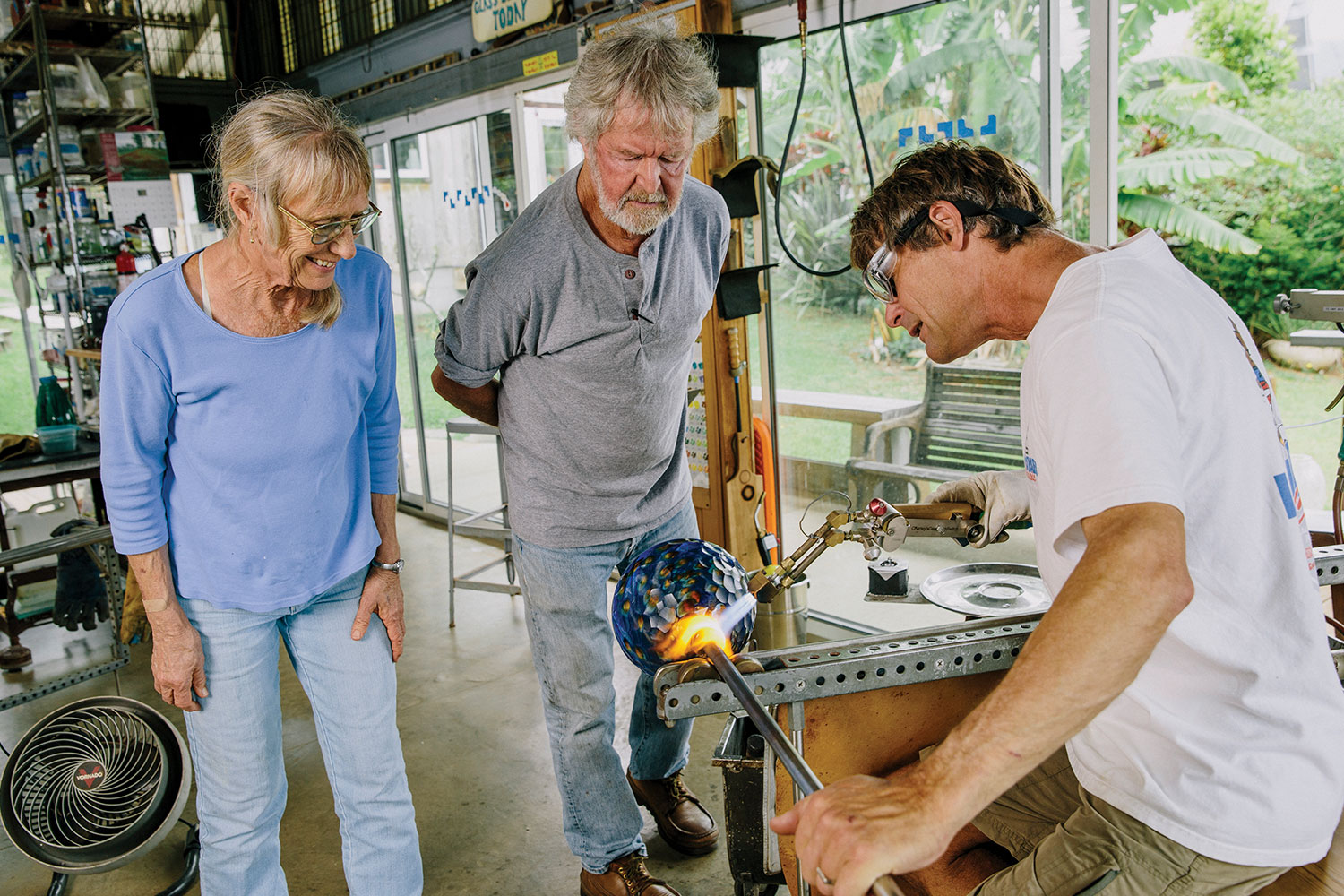 Imagine a world without glass. Not only would our homes be pretty darn dark, but we’d have no eyeglasses, mirrors, telescopes, windshields or fiber optics. Technological advancements in surgery, lighting, telephones and the internet would not exist. For these reasons and more, 2022 has been declared the International Year of Glass.

“We owe to glass the ability to see, scientifically and logically, who and where we are,” says Richard Mills, professor of art at the University of Hawai‘i. “Glass is now ubiquitous, so much so that we take it for granted.”

In honor of this invaluable invention, Viewpoints Gallery at The Courtyard in Makawao, is hosting “The Art of Glass.” The exhibit showcases pieces from more than 40 artists across Hawai‘i, including plates, vases, mosaics and sculptures.

“Our motivation is to celebrate glass as art and honor what it has done for
humanity,” says Joëlle C. Perz, exhibit director at Viewpoints. 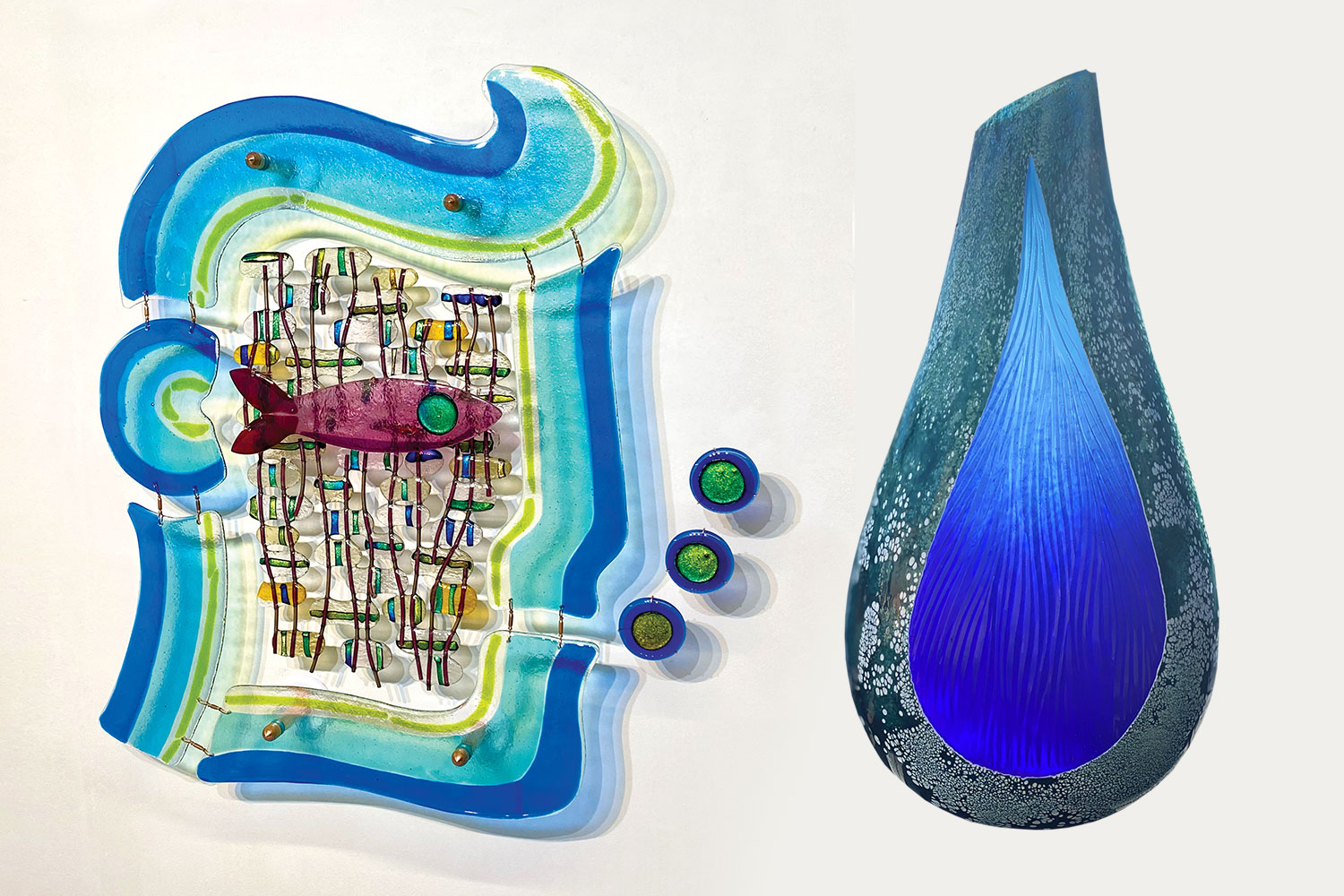 Though it’s not entirely clear where and when man-made glass originated, it is believed to have been discovered by the Mesopotamians around 3,500 BC as a byproduct of metalworking. The Romans brought the blowpipe into the mix, increasing the efficiency of production and therefore the availability and affordability of glass.

Historically, glass was used to create art pieces such as decorative windows, beaded jewelry and elaborate vases. But in America, its uses were largely pedestrian: windows, bottles, drinkware and the like. Then in 1962, artist and professor Harvey Littleton held a glassblowing seminar at the Toledo Museum of Art in Ohio that helped popularize it. Many of his students became renowned glass artists, including Dale Chihuly, whose whimsical glass flowers skip across the lobby ceiling at the Bellagio Hotel in Las Vegas.

Bill Worcester discovered glassblowing while studying oceanography on O‘ahu in the ’70s, and he and his wife, Sally, opened a studio in Oregon. “Back then we were melting Miller [beer] bottles in the furnace,” he jokes. The couple relocated to Maui and introduced glassblowing to the island.

“The Worcesters were part of the very first Viewpoints Gallery exhibit in 1990,” says Perz, adding that The Courtyard’s landlord, Larry Phillips, loved Sally’s work so much that he built the Worcesters a studio, Hot Island Glass, which is still open for business across the walkway from Viewpoints.

Decades later, the Worcesters still revere both the medium and the process. “A piece is built like a watercolor, layer upon layer,” says Bill. “As an art form, glassblowing has a high amount of instant gratification.”

“It’s a medium of contradictions — how can something be visible and invisible at the same time?” adds Miller. “It’s dangerous, hot and sharp-edged, but also smooth and soothing. That’s what makes it attractive.”

“The Art of Glass” runs from January 22 through February 19.