“Okay,” says Chef Anton, pointing an unhesitating finger at our fearless publisher, “then you will make the cake.”

And so begins our six-hour test kitchen creating a holiday feast.

One counter becomes an ad hoc meat station, and under Chef’s watchful eyes, Alix Buchter takes charge of a ten-pound pork loin that has been brined overnight with kaffir lime leaves, red chili pepper and Hawaiian salt. Chef demonstrates how to french the ribs, trimming around the bones, pulling and scraping the meat away. Soon Alix is wielding the razor-sharp knife like a pro, trimming and wrapping the bones in foil; cutting away the “silver skin” connective tissue and fat between the layers of meat.

“You want to make sure you remove the meat from the bone so it stays nice and white when you roast it,” says Chef. He pushes an external digital probe thermometer into the thickest part of the loin and places it in the oven. “I love this thermometer,” he says. “It takes all the guesswork out of a perfectly cooked roast.” An hour later, the thermometer’s timer will alert us that the pork loin has reached the proper temperature, and he’ll place it on the counter to allow the juices to redistribute — while we all salivate at the sight and savory smell. Fifteen  minutes later, Chef Anton has Alix wrapping the loin in Iberico ham and sauteing it in butter, adding another tantalizing layer of flavor.

After the loins are removed from the pan, Michael Haynes, account executive, stands with spatula in hand to finish the sauce. Taking the Asian pears that Chef Anton compressed the night before, Michael sautes them in butter until they are golden brown. With the pears delicately nestled on a platter, he sautes shallots and chopped apples in the same caramelized pan juices, adding more butter and melding the natural sugars. Once the shallots and apples are soft, Chef Anton drenches them in Calvados (apple brandy). The pan ignites with a pfumph! and Michael jumps back in surprise. “Whoa! That was scary!”

Once the three-alarm fire has burned out, Chef has Michael add homemade chicken stock to the pan. Ten minutes, one cup of Calvados, shallots, apples and four cups of chicken stock later, the rookie cook has a reduction of one-half-cup liquid. “Add a little butter, then strain out the solids in the chinois.” Chef demonstrates how to press the solids through the mesh of the conical sieve to extract the remaining sauce. “Be careful not to press so hard that the pulp comes through,” he says. Michael accomplishes the task like a saucier virtuoso. 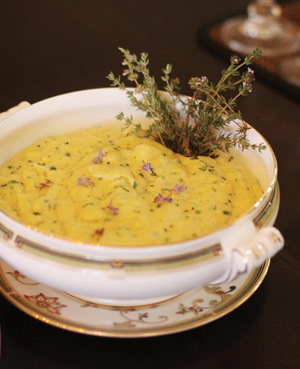 Having warned Chef Anton early on that “I’m an editor, not a cook,” Rita Goldman has been given the foolproof task of making polenta. Armed with a whisk and a footstool, our five-foot-nothing senior editor perches over the stockpot, scalding four cups each of milk and cream, then adds bay leaves and polenta. For what she declares is at least a solid hour, Rita whisks continuously, gradually adding ten cups of heated chicken stock to the polenta. The hard work done, Chef finishes the smooth, luscious polenta with a crescendo of Parmesan and mascarpone cheeses, fresh chives, parsley, and lastly stirs  83 percent European-style butter into the velvety mix. This being the holidays, we worry not about calories!

Meanwhile, Alix prepares dinosaur-sized green onions, trimming the ends and seasoning them with salt, pepper and a sprinkling of extra virgin olive oil. The onions go into the broiler to blister and soften. Michael peels asparagus, then blanches the stalks in salted boiling water for thirty seconds and cools them in ice water so they retain their bright green color. Purple Osaka mustard greens are prepped and sauteed, and John Giordani takes a break from supervising the photo shoot to mince herbs for garnish. 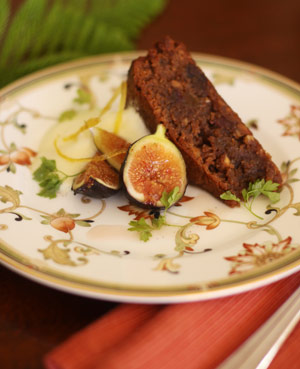 Armed with a ten-inch chef knife, Diane chops the chocolate blocks into pieces, then melts them with butter over a bain-marie (water bath). Chef Anton examines the eggs she has whipped with brown sugar, and announces his verdict: “You’ll have to whip them a lot longer. The cake will be dense and moist from the dates and almond flour, and the only leavening is from the eggs, so we must whip lots of air into the eggs to lighten the batter.” Resolute, Diane whips them to a light yellow fluff.

Meanwhile, Michael has been industriously chopping dates for the cake batter, while Susan Bendon, a friend who has been suckered — er, recruited to help, chops toasted almonds. With the mise en place ready, Diane gently folds the almond flour, dates, and almonds into the whipped eggs and chocolate-butter mixture, making sure, as Chef cautions, not to overmix and deflate the delicate cake. Into the buttered and parchment-lined pan the batter goes, then forty-five minutes in the oven. Soon the fragrance of chocolate-almond cake wafts from the oven, adding sweet chocolate notes to the air.

By now, Michael is getting the hang of this baking thing. Standing beside the stove, he explains that he is “blanching lemon zest for garnishing the cake, changing the water six times to remove the bitterness from the rind.” Then, per Chef’s directions, he  candies the zest in a simple syrup.

Susan follows Chef’s directions on preparing the vanilla-orange-spice-infused fig-poaching syrup, while Diane slices the figs into quarters for even cooking. The figs simmer in the chai-flavored syrup for a few minutes, “just barely enough so the figs keep their shape,” says Chef Anton. Next, she heats the fromager d’affinois (a double-cream French cheese, pronounced fro-mah-ZHAY dah-fee-NWAH), whisking it with a little cream. The sweet and salty cream-cheese marriage is chilled, to be used as a whipped topping for the cake. 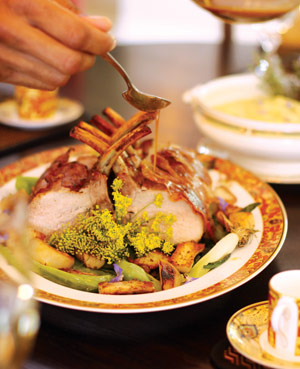 As Chef Anton adeptly plates the food for the photo shoot, we gratefully take our places at the table. Soon we are toasting one another with sparkling wine, and thanking everyone who made this year’s test kitchen possible: William and David, who graciously lent their home to our efforts, and remained serene even as chaos reigned . . . Mary Anne Fitch, who convinced them to do so (and is representing their home sale, just in case you are in the market) . . . Pacific’O Restaurant, for letting their executive chef come out to play . . . and most of all, Anton Haines, who orchestrated his amateur kitchen crew like a symphony conductor, preparing a holiday meal worthy of royalty.

Note: Although we spent a good part of one day creating the meal, you can spread the preparation over a three-day period. The cake and poached figs can be baked up to two days earlier, while the vegetables can be cut and readied for assemblage ahead of time. The pork should be trimmed and brined the day before your feast. If you prefer not to play “frenching” chef, you can cut the rack roast into thick pork chops, instead.