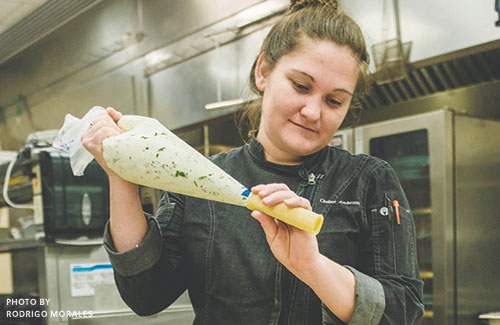 When Taverna Maui opened in Kapalua in March 2016, it brought together as co-owners two respected names in the island’s food community: Chris Kaiwi, longtime manager of Pineapple Grill and Plantation House; and Roger Stettler, former executive chef at Four Seasons Maui. And then there’s Taverna’s sous chef, Chelsee Anderson, who calls herself a “pasta Nazi,” but whose peers know her as “Chefette.”

Chelsee explains that her first employer and mentor, Chris Kulis, gave her that nickname when she worked at his Capische? restaurant in Wailea. “Every time someone would call me ‘Chef,’ I wouldn’t answer, because I couldn’t imagine that they were talking to me. I was the only female in the kitchen, and still in culinary school.” The nickname stuck, and so did Chelsee. “It wasn’t easy, but after two-and-a-half years, I had worked my way to the sous chef position.”

In 2016, Capische? became The Restaurant at Hotel Wailea, and Chef Roger, impressed by Chelsee’s passion and drive, recruited her to help open Taverna as sous chef; she joined the team as it developed menus and recipes.

Although a sous chef is, by definition, the kitchen’s second-in-command, Chelsee considers making fresh pasta her core responsibility. The 2012 Maui Culinary Academy graduate says, “I loved making pasta from the first time my stepdad, Papa Pete, let me help in the kitchen. I remember his fresh pasta with homemade Italian sausage ragù. Today, I am the “pasta Nazi” — I make all the pasta for Taverna. We do traditional pasta, but I can also make gluten-free, chickpea, even quinoa. If I’m training someone, it has to be made exactly how I want, or it gets thrown out.”

Her tough talk is belied by her warm smile — and a voice that jumps up an octave with the excitement of a kid in a candy shop as she says, “We recently purchased ten new dies for [extruding] various-shaped pastas. And I just bought eight new Italian cookbooks. I am immersed in Italian food. I dream about Italy . . . delis filled with cured salumi, cheese shops, fresh breads and wine shops.”

Demonstrating how to make crab manicotti, Chelsee confesses that the night this dish debuted, it was Taverna’s biggest seller. “I was tickled because it was my dish, created to represent the colors of the Italian flag. Everyone loved it!” One taste, and we agree. Baked in the intensely hot pizza oven, crunchy golden pasta ends peek out of the marinara-slathered manicotti. Contrasting flavors of creamy cheesiness and bright, fresh tomatoes dazzle our taste buds. Beaming, Chefette leaves us to continue her pasta making and cheffing, as we revel in the last few bites.

Get the recipe for: Taverna’s Maui Crab Cannelloni/Manicotti