Story by By Michael Stein 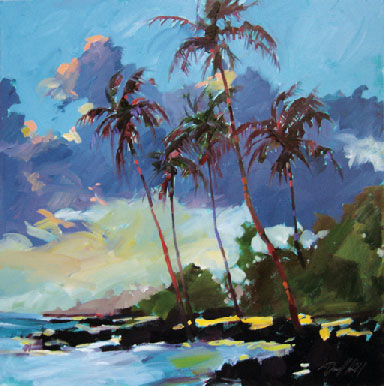 When Darrell Hill depicts Hawai‘i, he uses no brown or black.

Strewn with lava, the islands’ geologically young coastlines have always seemed, to my untutored eye, about as brown and black as you can get. But when you observe as keenly and paint with as much precision as Hill, you get, in his words, “a more black-and-brown effect by not using black and brown.” Hill blends a whole spectrum of hues to give the browns of a leeward hillside more radiance and light.

For Hill, painting is about the qualities of light that can only be captured through hard work and moment-to-moment alertness. His paintings tell stories not just about their subjects, but about the light itself.

The glow in his paintings may have something to do with Hill’s fortunate path as an artist. From his early days in Illinois, his parents and teachers supported his painting, and as a teenager in Southern California, he earned money pinstriping motorcycles and painting on sweatshirts, “stuff like monsters and hot rods. I was quite popular, especially at car shows.” Even a tour in Vietnam didn’t interrupt his art. Hill served as a combat illustrator and had a cartoon in the military journal Stars and Stripes.

In the mid-1990s, while working at Dayspring Greeting Cards as an art director and vice president of communications, Hill participated in several painting workshops in Hawai‘i. He moved to the Big Island and opened a gallery and frame shop, Hawai‘i Colors, in the town of H¯olualoa. It was there that Jim Killett of Lahaina Galleries discovered his paintings. Killett sold two within a week, and that began a relationship that has included gallery sales to clients all over the world.

At the core of Hill’s art are the ideals and artistic strategies of the plein air (outdoor) movement, which began in France in the 1700s, and carried on through the nineteenth-century French Impressionists and the American Hudson River School’s spectacular portrayal of the Eastern seaboard. Plein-air painting emphasizes a sensitive recreation of the natural world, and an affinity for subjects from everyday life.

“I like spontaneity,” Hill told me. In time-honored plein-air fashion, he paints different studies of a scene at different times of day. He loves the challenges of painting outdoors. “You’ve got a 16″x20″ canvas not much bigger than a window, but you have vast surroundings you have to focus down on. You have to get the location, lighting, and shadows right, and get the essence of the moment down very quickly,” especially when the scene includes people.

His style borrows from the Impressionists’ handling of color and luminance, but Hill’s work has its own bold, clean lines and strong contrasts that come from another set of influences: painters like Sargent and Gaugin, whose work featured simplicity and economy of brushstrokes; and above all the islands themselves.

In Hawai‘i, Hill’s palette simplified, shrinking from twelve colors to six or seven to capture the islands’ stronger reds and greens.

“Maui lighting is more intense,” he says. “I have to push and pull the contrast of the colors because it’s much sharper visually.”

Once he adapts to the natural light, the art of painting “becomes secondary to capturing the story of the moment.”

Hill’s work ranges from standard-sized canvases to murals, and his commercially successful output is prolific—more than 100 paintings a year.

Aside from regular trips to Newport and California’s Bay Area, Hill enjoys a peaceful life in Kamuela, where he paints every day in his private studio—a fruitful exchange between an artist born and raised on the mainland and the islands that gave his work a new palette and purpose. “Painters naturally flow to the place that fits them,” he says. “I’ve found mine right here.”

A founding member of Maui’s annual Plein Air Invitational, Darrell Hill teaches plein-air workshops around the islands. To see more of his work, visit Lahaina Galleries in person or online at www.lahainagalleries.com.