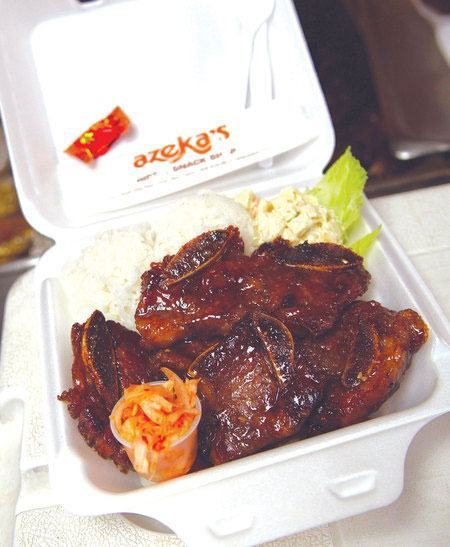 When Azeka’s Ribs and Snack Shop closed its doors on August 11, residents and visitors alike mourned the loss of yet another Maui institution. For over 56 years this landmark eatery has served up local-style plate lunches and the always-popular Azeka’s ribs.

Azeka’s Store was originally located on the family’s six-acre chicken and pig farm in Kihei in the 1950s. When the late Bill Azeka built the Azeka Place shopping complex in 1980, the store and snack shop were relocated to that location. As Kihei grew, so did Azeka Place, and it soon became what many consider the heart of Kihei.

Customers lined up throughout the final week to satisfy their taste buds one last time. One patron, who arrived around noon on the day before the closing, was surprised to discover the popular ribs were sold out for the day.

“Ahh, I’ll be back tomorrow,” he said as he turned away in defeat. “Early.”

Azeka’s has left a void in the hearts and stomachs of many, but some are still optimistic for another helping. Rumors abound over whether the Azeka family will distribute their product at other stores throughout the island. A note on the restaurant’s Web site reads, “Please watch for future announcements regarding the availability of Azeka’s Ribs at select island outlets.” We sure will.

For more than a decade, Maui-born Amy Hanaiali‘i has commanded the ears and hearts of Hawaiian-music lovers. With her latest album, Generation Hawai‘i—which climbed to sixth on the World Billboard Charts within weeks of its August 2 release—Hanaiali‘i reminds listeners why she’s been called one of the Islands’ most versatile recording artists.

While the classically trained Hanaiali‘i is known for her chicken-skin ha‘i (falsetto) renditions, this album showcases her multifaceted range. Listeners are taken on a musical journey—from the smoky jazz ballad “In Hilo Town” to the pop-inspired “Jewel.”
Generation Hawai‘i is perhaps her most personal album to date, inspired by her late grandmother, Jennie Napua Woodd, and her newborn child, Madeline Uale‘aokamahina Tikehu Austin. Hanaiali‘i recorded the lead vocals two weeks before her daughter’s birth. “My greatest gift with being hapai [pregnant] was to record this album with this keiki [child] moving with every single note I sang,” Hanaiali‘i says in her liner notes. The song “Napua” is a ballad honoring Jennie.

Hanaiali‘i wrote many of the album’s songs, and while she couldn’t turn to Grandmother Jennie for help with the Hawaiian lyrics, as on previous albums, she did find an impressive substitute in Kaumakaiwa “Lopaka” Kanakaole, great-grandson of the Big Island’s legendary Edith Kanakaole.

Since her debut onto Hawai‘i’s music scene in 1995, Hanaiali‘i has collected a Grammy nomination, several Na Hoku Hanohano Awards, and fans throughout the world.

Taking It to Court

Forget March Madness; Lahaina Civic Center goes nuts this November with the EA Sports Maui Invitational. The West Side’s annual Thanksgiving Week basketball tournament, billed by many in the athletics world as the paramount preseason tournament in college hoops, offers a chance for the sport’s elite to enjoy a week in the island sun—and for Mauians to see some dazzling basketball action.

High-profile college games routinely pack university arenas with crowds nearing 20,000. Lahaina Civic Center seats just 2,400, however, affording fans the rare opportunity to watch the big-ticket teams while sitting close enough to courtside to hear the swish of the net. Teams are always eager to prove themselves, and energy levels run high—but when the grand prize consists of preseason bragging rights, an atmosphere of fun and good-natured competition prevails.

Coaches and players hail the Maui Invitational as a valuable prospect for assessing the upcoming season’s competition. “The event has a great field,” says Purdue coach Matt Painter, whose Boilermakers join seven other teams from around the country at the Civic Center. “It’s a valuable opportunity to see where we are as a team early in the season.”

UCLA—the 2006 NCAA Finals runner-up—returns to highlight this year’s eight-team field, joined by fellow powerhouse Memphis, a handful of the NCAA’s most storied programs, and the host team: Honolulu’s Chaminade. Games will be played November 20, 21, and 22—and broadcast on ESPN. Visit www.mauiinvitational.com.

If you’re reading this magazine, there’s a good chance you’ve either worked for Maui Land & Pineapple Company sometime in your life, or have enjoyed the fruit of that labor. For more than a century, and under various appellations, “Maui Land & Pine” has been a mainstay of the island’s economy. Many a Mauian found his or her first job in the pineapple fields or cannery, and for generations, the company’s plantation camps provided its workers with housing, schools, stores, social and sports clubs—in short, a sense of community.

On Saturday, September 16, nearly 6,000 residents and visitors took a walk down memory lane at the inaugural Maui Land & Pineapple Festival and Homecoming, held at the Kahului cannery of the only surviving pineapple company in the U.S. Inside, old friends reminisced, viewed displays of archival photos and artifacts, and savored succulent samples of the fruit. (Our favorite variation? Pineapple chunks skewered and dipped in a chocolate fountain.) Outside, food booths manned by various local charities served up more hearty fare, and vendors offered merchandise with a distinctly Maui accent—most notably logo wear from the ML&P Company Store. Throughout the day, the company provided free tours of its pineapple fields and newly refurbished cannery.

Maui No Ka ‘Oi was delighted to be a part of the festivities. Folks whose names appear elsewhere in these pages handed out free copies of the magazine in the Made in Maui tent—which put us in the perfect spot to hear the sweet Hawaiian falsetto voices of living legend Auntie Genoa Keawe and rising star (and Na Hoku Hanohano winner) Raiatea Helm. All in all, a great day, any way you slice it!

‘Okolehao. The name brings to mind images of a torch-lit beach party where amorous sailors and laughing Hawaiian beauties grow tipsy drinking the fiery distillation of the ti plant’s root.

The original ‘okolehao was made by William Stevenson, an escapee from Australia’s penal colony who arrived on O‘ahu in the 1790s. Hawaiians of the day sometimes baked the high-fructose ti root to make a molasses-sweet treat. Stevenson fermented the cooked roots in an old canoe, then distilled the mix in round iron try-pots, whose resemblance to the human rear end is supposed to be the origin of the name ‘okolehao: “iron bottom.” Later distillers added other ingredients, like rice and pineapple juice.

The Merrie Monarch, King David Kalakaua, is said to have had his own distiller, and in 1889, ‘okolehao won a French award as “the drink of immortals.” But Prohibition stopped production, and even after its repeal, commercial distillers in the mid-20th century struggled and, for various reasons, eventually failed.

Still, the legend lives. Sandwich Islands Distilling Corporation hopes to have its new ‘okolehao on store shelves this fall. Its recipe includes fermented Ke‘anae-grown ti root with a bit of rice, pineapple, and sugarcane added, the Pa‘ia distiller’s best guess at the authentic formulation of the drink that made Kalakaua merry.