“Where’s that noise coming from?” I wonder, as I sit in the grassy parking lot just inside Polipoli Spring State Recreational Area. There’s a pair of cars and a friendly dog sitting under a tree, but I swear I’m the only human in sight.

Then it happens again. “Woo hoo!” a woman’s voice shrills, punctuated by another round of laughter.

I lean back, and see a massive wing whiz overhead. A pair of legs sways wildly, like those of a child on a swing, while outstretched arms point in either direction. I watch as two suspended bodies sail in a final zigzag before touching down.

I soon discover that here at Proflyght Paragliding, scenes–and sounds–like this are standard.

From the failed efforts of Icarus, to the accomplishments of the Wright brothers, man has always yearned to fly. To be clear, my own obsession with flight doesn’t involve a passport, security screening or complimentary peanuts. I’m after an open-air experience with minimal boundaries between myself and the elements. Rather than observe the scene, I want to become part of it.

From skydiving over the Tuscan countryside to bungee jumping off bridges in New Zealand, I’ve been launching myself from dizzying heights for most of my adult life. Thrilling as these experiences were, they were more about falling, less about soaring.

My quest to mimic our feathered friends has led me here to Proflyght Paragliding. I’m greeted by owner Dexter Clearwater, his assistant, Dottie (who happens to be his mother), and a shepherd/heeler mix named Daisy. It truly is a family business, with Dexter serving as chief pilot, Dottie handling the paperwork.

Proflyght offers tandem flights starting at 4,500 and 6,500 vertical feet. It is also the oldest full-time paragliding school in Hawaii, and Dexter has personally certified more than 350 solo pilots. He boasts a perfect safety record and estimates he’s completed around 15,000 individual and 7,000 tandem flights in his lifetime. 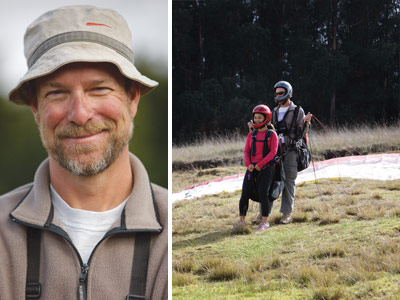 “It’s not a big adrenaline rush like bungee jumping,” Dexter tells me as we prepare for launch. “It’s more like an endorphin rush.”

Perhaps it’s those “happy chemicals” that make Dexter so likeable. With a deep smile and gentle mannerisms, he is utterly composed–exactly the kind of guy you want to jump off a mountain with. Looking like he stepped straight off the pages of an outdoor magazine, he is dressed comfortably in a fleece jacket, cargo pants and bucket hat. If Mister Rogers shopped at Patagonia, he’d be Dexter.

It’s just after 10 a.m., but the clouds have already swept in. Visibility is so poor that, despite our plan to start from the 6,500-foot launch, we’ll take off at 4,500 feet instead.

We find an open spot on the hill and Dexter cinches me into my harness. Despite being strapped to what looks like a beefed-up kite attached to dental floss, I feel completely secure. The Kevlar strings, Dexter says, can hold up to 5,000 pounds without breaking. As an added precaution, he always flies with a reserve parachute, although he’s never had to use it.

I watch as Dexter begins meticulously laying out the wing, clearing the lines, and positioning the air cells to catch the wind. With the banana-shaped chute sprawled open, we strap ourselves in and await takeoff.

But this manmade sport is still at the mercy of Mother Nature. The air is motionless, so we take part in another activity–“parawaiting.” I watch as two birds cruise by, eager to join them.

Turns out, parawaiting isn’t as mundane as it sounds. From this height, the views are staggering. Straight ahead are the West Maui Mountains, flanked by the Pacific on either side. Puffs of clouds cast shadows over Wailuku to the north, while the sun beats down on Kihei shores to the south.

Just as I’m getting used to parawaiting, Dexter alerts me that it’s time for liftoff. On his command, we start a brisk walk that evolves into a sprint, and before long I’m spinning my feet in the air, a la Fred Flintstone. We’re flying.

I scoot back into the harness and swing my legs forward. This open-air cockpit is like a lawn chair on strings, and is surprisingly comfortable despite the numerous belts and buckles strapped tight. Nature’s raw power tugs us upward, and in that instant, we are no longer watching our feathered friends–we’re one with them.

The hard part is over, and with Dexter steering, I’m free to soak in the view. Maui stretches beneath us, and all of a sudden familiar sights seem compressed by this sky-high perspective. Buildings resemble Monopoly pieces and the traffic zooming below mimic Hot Wheels racing down a track. The fifty-foot trees seem like starter sprouts, and I swear I could pluck them with the slightest pinch.

“There are our friends straight ahead,” Dexter says, referring to birds we spotted earlier.

We share the sky for a moment, then our fellow flyers swoop out of sight. Dexter and I aren’t so nimble. Instead, we leisurely glide ahead to survey Maui’s scenery.

Rows of sugar cane carpet the Central Valley, purple swatches proclaim the lavender farm below us, and windsurfers skim and slalom along the North Shore. I see the swells rising in the distance and imagine we’re doing our own version of wave riding–surfing the skies and using wind currents to carve a path through the atmosphere.

Despite the bustle below, up here it’s silent. Our motorless apparatus is carried by invisible currents, gliding us along ever so peacefully. Now this is what it’s like to fly like a bird. We slow dance with the wind, swaying back and forth as we hover above the earth.

The only sound is my own voice as I squeal in excitement.

“Yeeeaaahhh!” I encourage Dexter as we sweep from one direction to the next. I suddenly understand the joyfully shrieking woman I heard earlier. Now, it seems, I am that woman.

“Why don’t we have a look over there,” Dexter says, steering us toward a patch of trees the size of several football fields. I feel like a giant looking down on a miniature garden. The lush green tapestry, which has inspired so many plein air artists, is more stunning than anything hanging in a gallery. We inch so close to the treetops, it’s as if we’re preparing to land in the branches.

Instead, Dexter tugs on the controls and we do a 180-degree turn towards an open field.

Delight turns into anxiety, as I realize that the hard part isn’t over after all. On Dexter’s command, I do my best mummy impression and dangle my arms in front of me. I thrust my legs forward and imagine myself sticking that perfect landing. “Five . . . four . . . three. . . ,” I count silently. “Two. . . .”

Dexter takes the brunt of the landing; my only job is to make sure I don’t trip over my own feet. I touch the ground, softer than a walk, and just like that, my land legs are back. I turn around and watch as the wing collapses like a sheet settling onto a bed. Dexter smiles and sticks out his hand for a high-five.

“Textbook landing,” he tells me as we slap palms.

I regale Dexter with every sensation and sight we’ve just experienced, forgetting that it’s something he’s seen thousands of times. Apparently, this is a normal reaction. “People new to this sport, all they’ll talk about is flying,” Dexter assures me.

Now forty-three, he started flying at eighteen, but says he was destined for the sport at birth. “I’ve always wanted to fly, even when I was a little kid,” he says. “My grandmother told me my first word was ‘plane.’ I would point up and say ‘plane, plane, plane.’”

But what Dexter dreamed of was flying something small–something barely there. “The closer to just strapping on a pair of wings, the better, and paragliding is pretty close to that,” he says.

Dexter first visited Maui on a whim in 2001. “I was teaching paragliding in Salt Lake City, and you can’t teach in the winter there,” he explains. “I usually would go to Mexico, but that year I decided to come to Maui to see what it was like here.”

His round-trip ticket booked, he arrived with little more than a few suitcases and his paragliding gear.

“I never used that return ticket,” he grins.

Instead, he began working for Proflyght Paragliding, then bought the business in the spring of 2002.

Reliable weather and a gentle slope make Polipoli one of the best places to learn in Hawaii, drawing enthusiasts from around the world. Dexter says the area offers nearly 320 flying days.

“What makes Polipoli special, beyond the fact that it’s a great place to train new pilots, is that it’s one of the most consistent flying sites on the planet.”

Dexter and his crew of three pilots are scheduled to work 365 days a year. Their only days off are dictated by the weather. And that’s just how Dexter likes it. Flying is what he lives for.