When they purchased the place in 1984, the young couple scarcely looked at it. “We walked into the house, right out the back door, sat on the sea wall, and Jim bought it,” says Susan. “My mother was absolutely appalled.”

Built back in the 1930s, the structure had been smashed by tsunamis and knocked right off its pins at least twice, once in 1946 and then again in 1960. When Jim and Susan showed up, the fifty-year-old building was “a beat-up old beach house.” Its ceilings, made of cane-fiber sheets called Canec, were sagging and stained. Phone lines were tangled like spaghetti everywhere, and the living room was jammed with windsurfing equipment. The structure had sagging beams, newspaper insulation, and four or five layers of roof. And it had something else.

A sense of place. 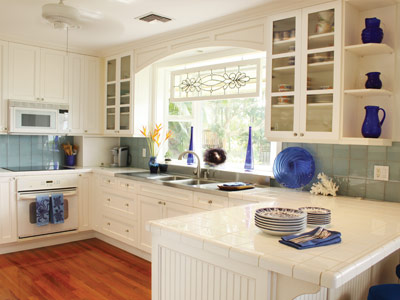 If the ocean along this robust stretch of North Shore coastline were a planet, this house would be its moon. The gravitational pull of the sea seems to make the house a mere portal to the seaside, and two easy sweeps of steps—one off the living room, the other to the left of a side room that feels like a Southern screened porch—seem to assist with that motion, barefoot, onto the lawn. The leaf-green of the lawn turns to the milky green-blue of near-shore waters, then to the sapphire of the farther sea, then to the pale china blue of the northern sky. Waves break into white combers along this shore, and the water-heavy trade winds keep improvising similar cloud combers overhead.

What’s great is that the neighbors here have all somehow resisted the urge to separate their lots with screens and walls. They’ve set aside the compulsion for privacy (“This is my ocean view!”) that afflicts so many other beautiful locations. Yes, neighbors can see each other’s houses, but the trade-off is that all of them get 180 degrees of transcendental beauty. Who cares about the houses, anyway, when you have such a seascape unfurled, with dawn to the right and the mystic peaks of West Maui to the left? And the lawn goes on and on. Susan and Jim’s now-grownup children, Annie and John, will confirm the obvious, that this is the greatest place in the world for a kid to grow up. 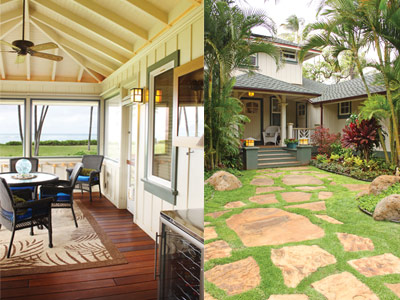 Trees frame this house with a magnitude that only a long stretch of time can generate. Seaside, coconuts in a loose grove–tsunami survivors all–arc like dancers, each with its own curve. Around the street side you find botanical-garden-quality specimens: a big banyan with a treehouse, a plumeria as rotund as a cumulus cloud, fruit trees (mango, orange, lime, tangerine), and a dark, shielding shower tree that baffles any intrusion. In fact, the entire neighborhood on this stretch of shoreline is packed with tropical trees that muffle traffic noise and cool the small community. It’s a coastal oasis.

The home itself has come a long, long way from the days when it was a “beat-up old beach house.” The present owners have loved it into a resurrection.

After Jim announced he was buying the place, and after Susan called the realtor and asked the questions one usually asks beforehand (“How many rooms does it have?”), and after the recreational equipment and phone wiring were cleared out, Susan saw the Cinderella in it. “It isn’t a pretentious house,” she says. “It keeps the character of old Hawaii. It really reflects the history of the island and island architecture.” She was inspired to keep that sense of history and place while reversing the work of time and tide.

“The floor plan was always terrific,” she says.

Jim and Susan took the house through three major revisions. First they cleaned the place up and put screens on the windows, installed irrigation to beautify the yards. “This is an indoor-outdoor house,” she says, though “outdoor-indoor” might be more accurate. In the late eighties, they remodeled the kitchen and great room, replaced the ceilings, and added a second floor with a master bedroom. Then they reworked the cozy-scale rooms on the east side of the house as a “children’s wing,” converting the garage into a family room. 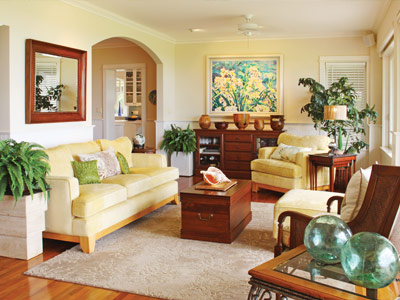 After two-thirds of a seaside century, the building’s beams and bones had reached their twilight years. “Finally we couldn’t remodel it any more,” says Susan. So in 2002, “we gutted the house.” They brought the whole structure down, “pretty much,” finding all sorts of gimcrack components such as siding made of old fruit crates with the labels still intact. Then they re-created the house on the same foundation just as it had been, or just as it ought to have been. This meant far more than simply adhering to the floor plan. They remade the windows and walls in their original places, and they stuck with the carpentry style, reminiscent of Shaker construction, that you see in the old cane houses—the board-and-batten ceilings and walls, the simple built-in shelves and cupboards, the vertical wainscoting of bevel-edged boards, kitchen cabinets with plain glass doors framed in white. Glass knobs on the cabinet doors. A lot of honest one-by lumber in evidence.

In a myriad of interior details, the house mirrors its setting. A clean cloud-white predominates in the main rooms, even in the appliances and telephones, and the accents are all blues and greens. “Ocean colors,” says Susan. “We took our colors exactly from the ocean. We spent hours finding them.” As a result, the interior “almost feels like water.”

The key design principle: “We wanted to keep with a sense of place.”

As she says this, I can’t help but remember that the “place” happens to come with tsunamis. History suggests that the beloved house is set for a knockout punch, who knows when. Clearly, the present owners’ love for the house is one of those heedless, Anna Karenina-type affairs. Perhaps the only explanation for their recklessness is the fact that they haven’t yet experienced a full-on slammer like the last one in 1960.

Their next-door neighbor, though, an elderly widow named Barbara, has lived in her house since 1954. So I called on her to ask what it’s like to undergo a tsunami. She kindly obliged. We sat on a punee with her cats and looked out at the sea.

They had had ample warning, she told me. In fact, three false alarms preceded the real one, and each time they had packed up the four kids, the essentials, the grandmother, and driven inland to the end of the road where they could watch the lights of their house and wait for something to happen. The fourth time, about midnight, they heard a freight-train-like roar, and they saw the lights in the house go off.

In the morning they discovered the house relocated inland against a monkeypod tree. The entire face of the structure had been wiped free of window glass. Walls were knocked silly, the refrigerator relocated, the remaining furniture scattered, and even the rearmost rooms stained with water and mud.

“It was character-building,” she said with a smile. “You need to be pushed around every so often.”

They put the house back up on its foundation, a little higher this time. Rebuilding was never in question. As we looked out at the waves, which rolled endlessly toward us, she said, as if by way of explanation, “Heaven can’t be more beautiful than this.”