Sunday morning, 8 a.m. The parking lot above Malu‘aka Beach in Makena teems with tanned bodies clad in Speedos, shorty wetsuits, and goggles; swimmers of varied ages and ability gear up, swapping  sunscreen and stories. A timid first-timer ambles up to the  congregation. She’s greeted enthusiastically and given a shocking-pink latex swim cap—standard issue. “We all wear these,” says a veteran swimmer with a wink. “For safety.”

I first learned of this pink-capped phenomenon when two silver-haired ladies trumped my tales of adventure with their claim of  swimming to Molokini and back. Molokini? That tiny speck of land separated from shore by several miles of ripping current? Eyeing the women’s well-defined back muscles and the white tan lines betraying their shoulder straps, I suspected they might be telling the truth. Patti Hawkins and Janet Mercer fessed up to being members of the Maui Master Swimmers, a.k.a. the “Pink Caps”—a riotous gang of aqua-holics who hit the high seas for health and adventure. 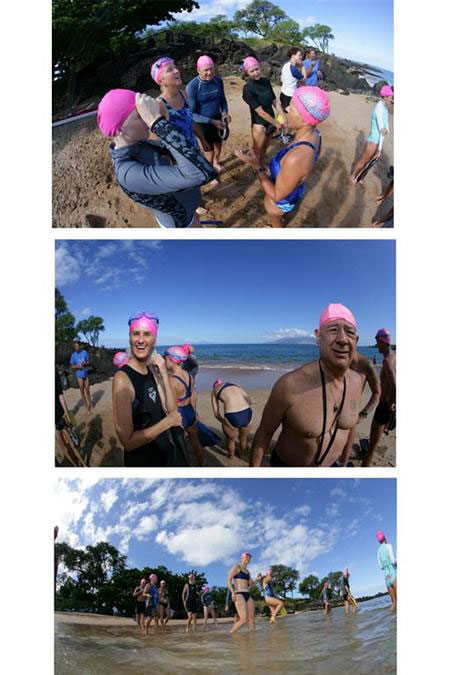 Maui Master Swimmers come from all walks—or swims—of life. Club members range from 68-year-old attorney Jim Kreuger, who swims competitively and helps organize contests, to two 20-somethings from the Maui Forest Bird Recovery Project, who drop in now and then. The core group has swum together for nearly two decades. Many of them train several times a week, climbing into chilly county pools at dawn and dusk, and competing in rough-water races throughout the year. But Sunday mornings are considered sacred, reserved for unofficial club swims, set aside for the pure fun of getting wet with friends and seeing what’s under the water.

Standing on the beach, longtime club member Doug Rice sets the tone of the day’s exercise. “See this?” he asks, flourishing a banana as his comrades tug on their          fluorescent pink bonnets. Sneering viciously, he rips the banana in half. “Fingernails!” he declares. “Sharks are terrified of fingernails!” He claims that this demonstration of fruit-peeling prowess will guard the group from any scuffles with cruising marine life.

Thus dubiously protected, the swimmers descend one by one into the water. They spread out in a long chain, like links in the body of a water millipede. Arms and legs rhythmically cut through the surface, creating a soft rushing sound. Some swimmers sport stubby, clipped fins; others wear the long, slender type, designed to instantly transform bipeds into mermen or mermaids. The strongest consider it a point of honor to swim sans fins—a handicap that evens out the field and allows slower swimmers to keep pace.

The pace isn’t extreme; the two-hour Sunday jaunt includes plenty of stops and more chatting than one might expect from serious athletes. “We haven’t seen each other in a whole week!” explains Mercer.

The usual Sunday route travels from the south end of Malu‘aka Beach (which fronts the Maui Prince Hotel) to the tip of Pu‘u O Lai and back, hugging the coastline for roughly 2.5 miles. “Roughly” may not be the right word—hardly a ripple disturbs the morning’s bathtub sea—but “hugging” is apt: these crazy swimmers crawl right up and get cozy with the sharp a‘a (lava rock) fringing the shore. As swells push them up near the rocks, they all scream in glee. They call this fearsome stretch their “playground.” Water-park rides consist of “the elevator” and “the slosh,” spots along the coastline that provide an especially bumpy ride.

Two designated kayakers steer wayward swimmers back to the fold, warn of fishing lines set on shore, and periodically count caps. Today the count is up to 23—a Sunday swim record. Among the number is club coach Malcolm Cooper, a bona fide character with a bright gecko clinging to one cheek of his Speedo. When the group splits in half to accommodate those who want to dawdle and those who want to charge ahead, Cooper alternates between both. The confused counters don’t complain, perhaps because Cooper is known for tipping kayaks. The fun-loving coach also produces an annual “Master Swimmers’ Calendar,” filled with Busby Berkeley-esque photos courtesy of professional photographer and club member Don Bloom.

Bloom has documented the group’s aqua-bound antics since joining them 16-years ago. With a camera strapped around one shoulder, he navigates the swim with an artist’s attention to detail. His photos convey a wild exuberance and a sense of freedom that many of us don’t feel on land, much less underwater.

Underwater, the Pink Caps are a photogenic bunch. They delight in campy poses, synchronized movement, and facial expressions demonstrating utter joy or mock terror. “I stuck my tongue out!” shrieks one woman, after a shoot. “It tasted good!” Holidays are celebrated with appropriate poses: palms up for Palm Sunday, for instance, and spelling 2007 with their bodies on New Year’s Day.

In one sophisticated pose, they hang upside down, feet touching the surface, to create the illusion of walking on water.

Other Sunday detours include ducking through an underwater archway and visiting a cave inhabited by Bruce, a white-tipped shark. A second shark recently moved in, christened Brucella. “We didn’t know it was a timeshare cave!” says Krueger. A passionate discussion ensues about whether or not the white tips can remain still inside the cave. (Most sharks must constantly move to pass oxygen across their gills.) Meanwhile, stroke after stroke, the athletes close in on Pu‘u O Lai and the edge of what is known as Little Beach.

“We started out swimming from Keawakapu Beach to the Grand Wailea,” says Mercer. “It used to feel like we were out in the middle of nowhere.” As the shoreline was developed, the swimmers headed further south. Sometimes they venture from La Perouse Bay to ‘Ahihi-Kina‘u—a less protected, more challenging route that crosses near the local surf spot known as Dumps. “When the surf is big,” says Mercer, “we’re lifted 15 feet in the air.”

“You could wind up au gratin so easily,” adds Krueger, referring to the forceful swells that can slam a swimmer into the reef.

Concerned about just such a situation, a tourist once called the Coast Guard to the aid of the pink-capped gang. When the rescue helicopter and jet skis arrived, they found the swimmers at ease in their ocean playground. “They recognize us now,” says Mercer with a laugh.

Of course, swimming isn’t without hazard; each veteran is quick to point out scars earned over the years: a scabby brush with reef or rock, even a shark bite. Eleven years back, Bloom says he was swimming “in really murky water. I couldn’t see my hand in front of my face.” He felt a sting in his side and whipped around, his foot briefly landing on a 12-foot tiger shark. “I spun so fast, I spun out of its mouth.” He escaped with half a bite mark. “I forced myself to get back into the water a couple of days later. I knew that was the only way I could keep swimming.”

It was Bloom’s birthday that prompted the swim out to Molokini. Exploring the backside of the crater was fun, he says, but “the swim out was pretty much a grind.” He prefers the Sunday swims, when he can look around for things to capture on film, especially curious dolphins or manta rays. Fitness is a bonus for Bloom; his main motivation is spending time with friends and having fun—a sentiment shared unanimously by the Pink Caps.

“There’s something special about being in the water,” says Doug Rice. “You can be kind of grumpy going in and come out feeling great.” And when is this nonstop jokester ever grumpy? “I guess I get enough swimming in,” he says.

While there’s nothing really like swimming with the Pink Caps, watch them try to synchronize swim in video footage captured by Bloom—go online to www.youtube.com/watch?v=vxVrwcZ2mzg

Earn Your Own Pink Cap:

–Join the recreational swim every Sunday at 8 a.m. on Malu‘aka Beach in front of the Maui Prince Resort, Makena.

–Become a Maui Masters Swim Club member. Open to anyone 19 years or older who can swim 50 meters. Visit www.swimmaui.com for workout times and locations.