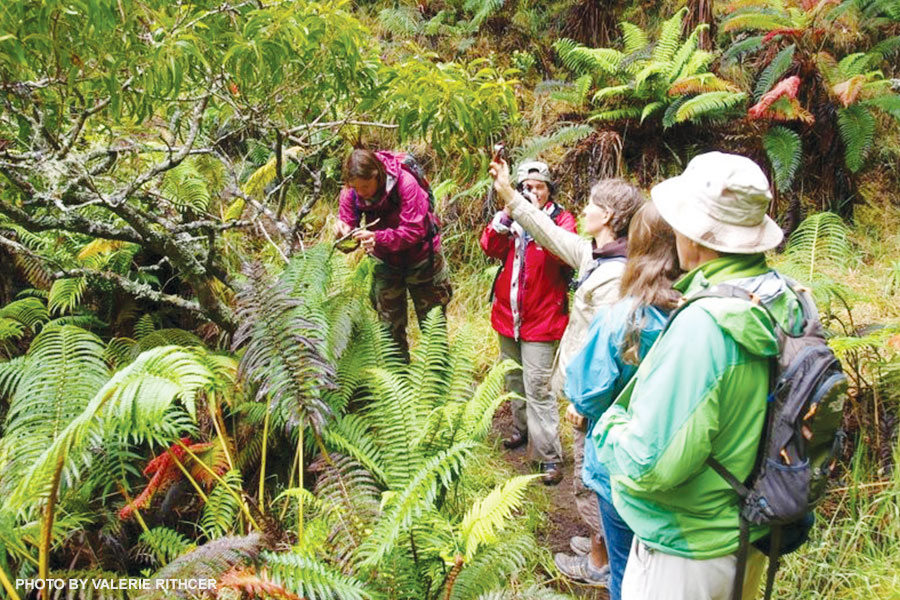 Not far beyond Makawao’s quaint shops and suburbs, an unbridled wilderness thrives: a riot of majestic trees, opportunistic vines, and mosses aglitter with dew. The ancient Hawaiians called this upland forest Wao Akua, realm of the gods. It’s also East Maui’s water factory. The diverse native flora functions as a sponge, collecting rainwater and delivering it to underground aquifers. Next time you turn on the tap in Makawao, Ha‘iku, Pa‘ia, or Hana, you can thank these trees and shrubs.

The East Maui watershed, which encompasses 20 percent of the island, shelters rare and fascinating species, many of which exist nowhere else on Earth. In the speckled shade of koa trees, scarlet honeycreepers plunge sickle-shaped beaks into creamy lobelia blossoms. Happy-faced spiders — small as a baby’s fingernail — hide underneath Hawaiian hydrangea leaves. This remote and wondrous world is a mystery to most people, even Maui residents. And that’s a problem. According to an old conservation adage, people only protect what they love. And loving honeycreepers and spiders — even happy-faced ones — requires knowing that they exist.

To solve this dilemma, island conservationists enlisted some creative help. This autumn marks the tenth anniversary of Malama Wao Akua, a juried art show cosponsored by the East Maui Watershed Partnership and Viewpoints Gallery in Makawao.

Malama means to care for or cherish. It’s an apt description for the Partnership’s relationship to the upland forest. The collaboration of public and private landowners organized in 1991 with a simple mission: protect East Maui’s watershed. The first of its kind in Hawai‘i, it inspired the creation of eleven more watershed partnerships statewide. East Maui is the largest, responsible for overseeing 123,000 acres. Its slender staff stays busy fencing pristine areas, ridding the forest of invasive species, and, perhaps most importantly, educating the community. 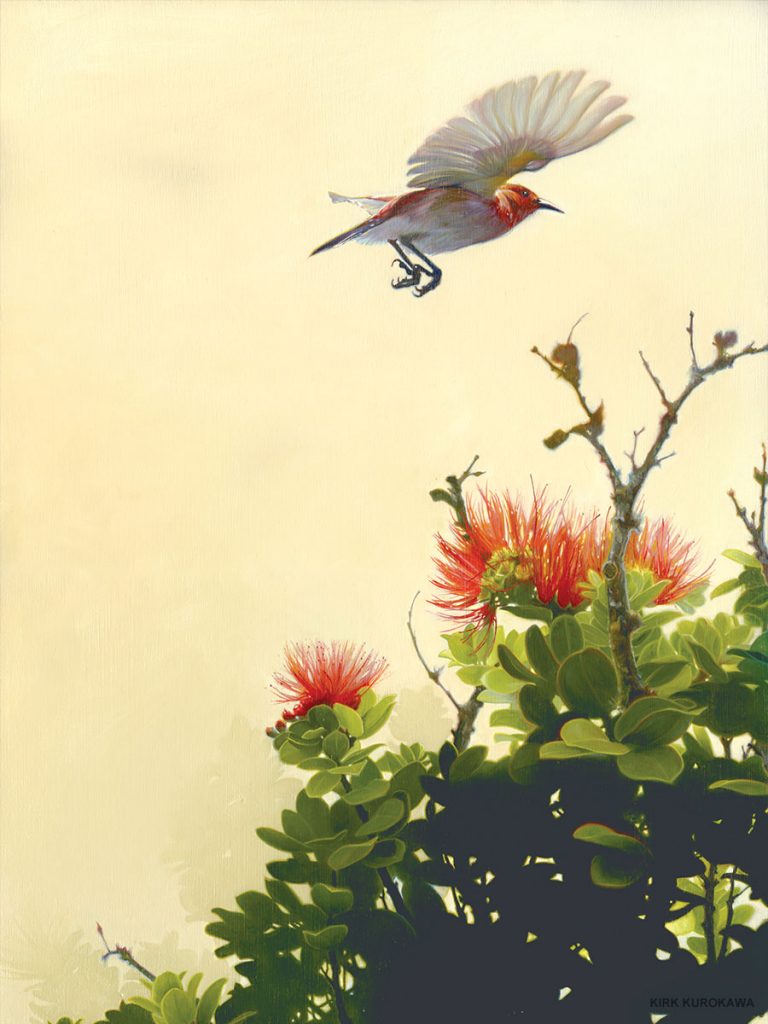 Kat Lui came up with the idea for an art show in 2003, while working as the Partnership’s public outreach liaison. She understood that artists can communicate nature’s poetry in a way that scientists can’t. Viewpoints Gallery agreed to host an environment-themed show and Malama Wao Akua was born. Artists were invited to submit work in any medium, with one caveat: it must feature a species native to Maui. Jurors from both the art and scientific communities would select the pieces for the exhibition.

“That first year was difficult,” says Lui. “We got entries with bamboo and barn owls — not native species. That was part of the learning curve.”

The initial entries may have been skimpy on native material, but they overflowed with enthusiasm. Maui watercolorists and sculptors were eager to contribute their talents and to learn about their natural environment. Lui assisted them by offering guided hikes into the Waikamoi cloud forest, where they could see honeycreepers flirting in the koa canopy. “I really wanted the artists to breathe the air, walk the dirt, hear the birds, and be inspired from their heart,” says Lui. 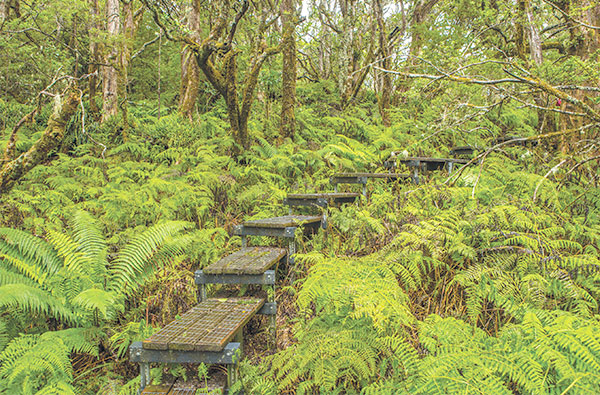 “When we were first approached by the East  Maui Watershed Partnership to do the show, it was an easy decision,” says Joelle C. Perz, the art director and exhibit coordinator of Viewpoints Gallery. “Being of help to the community and the environment has been part of Viewpoints’ philosophy since its creation twenty-five years ago.”

Over the years, Perz says, the show has grown dear to Maui’s art community. “I’ve especially enjoyed the nature walks in the preserve areas, which are magical. They’ve given me a great feeling for the untouched  native environment and are a source of inspiration for several of my paintings. As art director, I love the fact that the show is open to everyone; it is always a joy to discover new and exciting work by unknown or budding artists.”

Lisa  Kasprzycki, a dynamic, passionate painter who has participated in Malama Wao Akua from the start, agrees. “I love this show,” she says. “It’s unpretentious, open to everybody, and yet very specific. I learn things that I didn’t know about because of the show.”

One year, while scouting for inspiration, Kasprzycki spotted a dazzling tree on the opposite ledge of a steep gulch. She consulted with her botanist friends, who identified it as ‘ala‘a. She got permission to visit the D.T. Fleming Arboretum, where a large ‘ala‘a grows amidst a host of other native species. With her sketchbook and camera in tow, she waited for the sun to illuminate her model’s silvery leaves and golden fruits. “I felt like I had my head rearranged by the trees,” she says. “They had something to say.” Her resultant painting contains these arboreal whispers in the gestures of the branches.

In 2011, Kasprzycki won the People’s Choice award for her oil painting depicting three Hawaiian crows perched on akia branches. It’s likely that most of the viewers have never seen a native crow, which now exists only in captivity. Kasprzycki’s evocative image brought the vanishing birds to life. 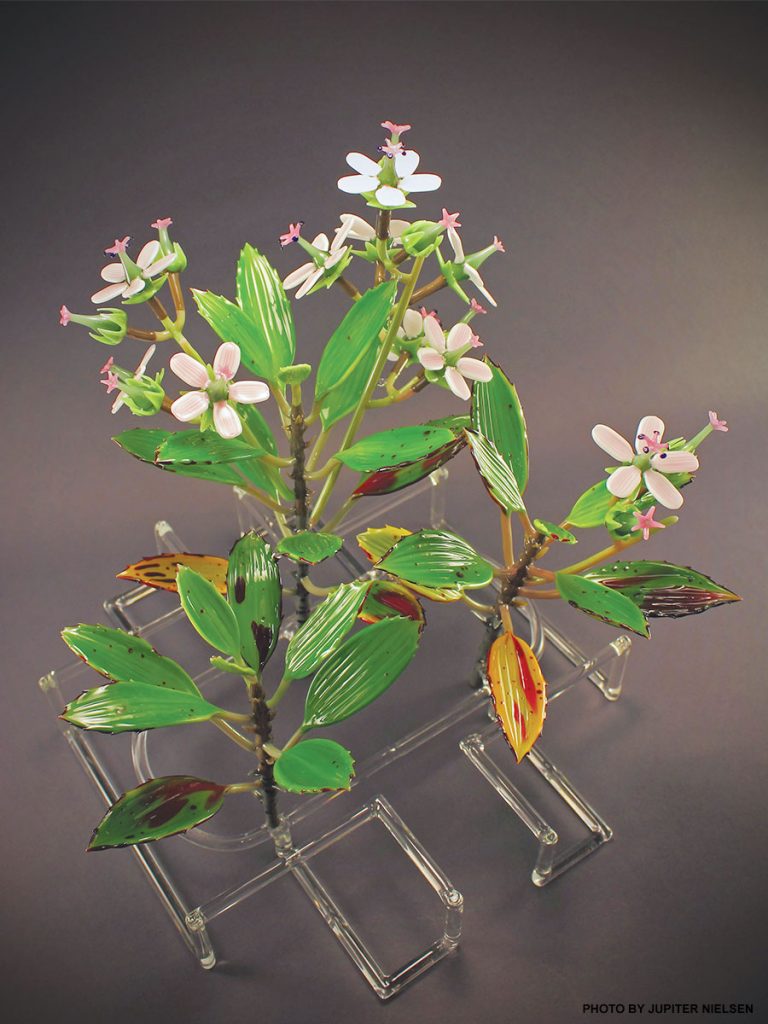 Conservationists have dared to show their creative streak as well. Jordan Jokiel, former program manager of East Maui Watershed Partnership, is among the wildlife biologists and fence builders who’ve entered pieces in the show. Jokiel reflected on his fieldwork experiences by fashioning a thick stand of ‘uluhe fern out of paint cans and fencing.

Malama Wao Akua has continued to grow in scope and substance. Sixty-five artists submitted work in 2003. Last year more than twice that number entered. In 2015, the exhibit will move to the Hui No‘eau Visual Arts Center, a larger venue.

The current outreach liaison, Allison Borell, has picked up where Lui left off. In addition to leading hikes into Waikamoi, she arranges access to many of Maui’s other spectacular native landscapes: D.T Fleming Arboretum, Auwahi dryland forest, and Waihe‘e coastal refuge. Marine-minded artists can board the Ali‘i Nui catamaran and spy on native fish and corals while snorkeling.

At the opening reception, fence builders and pig hunters shed their camouflage for dressy aloha shirts and rub elbows with artists. Ornithologists and botanists mingle with printmakers and ceramicists. A kind of cultural cross-pollination happens — which can only be good for the future of the forest.