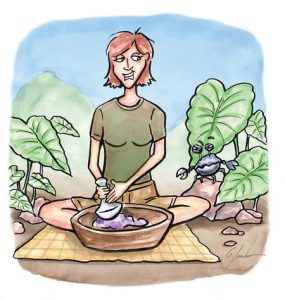 Hay fellow gourmets! And I do mean hay . . . join the barn-stomping fun at Maui County’s second Agricultural Festival, March 14th at Maui Tropical Plantation. Talk story with local farmers and challenge yours truly to a sack race or egg toss—but look out, Miz G’s got a killer curveball! Speaking of spectacular serves, fork over $25, and you can graze in the Taste Education tent—where each farmer has selected a chef to collaborate with on delectable tastes of Maui. Yum! And if your beloved basil plant is looking a little limp, bring it over to the ever-popular “Ask the Farm Doctor” booth run by the University of Hawai‘i folks.

These may be tough times, but before tightening your belts, remember: it’s extra important to support local restaurant owners, chefs, and waitstaff. As the sign above Polli’s in Makawao declares, “Come in and eat or we’ll both starve!”

Case in point: Sayonara, Kincha! The Grand Wailea’s James Bond-ish underground sushi restaurant has shuttered its secret elevator for good. (What will the resort do with those sumo-sized rocks imported from Mount Fuji? The kimonos and lanterns? Now that’s a fire sale worth attending.) If losing Kincha weren’t enough of a blow, Hirohachi sushi bar also closed. (Enjoy practicing your putt and drive, Chef Hiro. We’ll miss your exquisite hama!) It’s bittersweet news. Next-door neighbor and sushi heavyweight himself, D.K. Kodama of Sansei plans to open Quattro, a Latin-fusion joint in the newly vacant spot. First D.K. brought us Italian-Japanese at Vino—now Latin fusion? That guy is one creative cook!

More closings/openings: Mañana Garage and Lahaina Store Oyster Bar & Grille have closed, but rumors have been ricocheting around who might move into both locales . . . and a certain publicist confirmed that Chef David Paul was spotted cleaning the former Zuihao site on Front Street. Maybe by the time this mag hits the stands, we’ll have fresh meat to sink our teeth into. Yowza!

A mighty mahalo to the Maui Prince for resurrecting the “Mahalo Card.” Once again, anyone with a Hawai‘i ID can use the card to shave 20 percent off the bill at the resort’s restaurants, including the new Molokini Bar & Grille. The Grille replaces the former Prince Court, but occupies the fancier digs next door. Brunchgoers, before you panic: the Prince Court’s resplendent Sunday buffet remains intact. Whew!

The recent ‘Aipono Awards Winemaker’s Dinner hosted by Pineapple Grill took guests on a grape-kissed journey through France—commencing with Champagne and moving through Burgundy, Bordeaux and the Rhone. Chef Luckey’s superb cooking was a perfect traveling companion. Next, we’ll be touring the wines of Spain: Rias Biaxas, Ribera del Duero, Rioja and Navarra at I‘O on April 9th. Feel good about indulging: proceeds from the dinner series benefit Maui Culinary Academy. (Call 661-8422 for reservations.)

Speaking of the ‘Aipono Awards . . . Get tickets now for the sell-out April 17th gala. (Call 242-8331 for more info.) And stayed tuned . . . this year’s award-winning restaurants will be announced in the next issue!