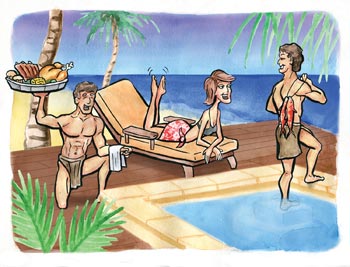 Miz Gossip recently woke from a delicious daydream. . . . she was at the Fairmont Kea Lani in Wailea, dangling her toes in a private plunge pool at one of the resort’s beachfront villas. Her spearfishing beau strolled up with bright red menpachi (squirrelfish) to throw on the grill. Amazingly, it wasn’t a dream! Sometimes life on Maui is simply that luxurious.

Lucky Miz G was at the Kea Lani to attend the Noble Chef benefit for Maui Culinary Academy, where well-heeled guests raised nearly $100,000 for the school. Celebrated Chef Colin Hazama flew in from the St. Regis on Kaua‘i to dish up the first course, a tasty sweet shrimp—head and all. While guests at her table argued about how or whether to eat it, Gossip just snarfed ‘em. But it was Craig Omori’s dish that won her heart. The Academy’s chef instructor presented the perfect reception snack: salmon and a sprinkle of roe served on an edible pastry spoon. So genteel! Too often, dressed up partygoers are forced to contend with hard-to-balance little dishes or, worse, deadly satay skewers. Gossip commends Omori’s creativity and consideration. See recipe here.

Meanwhile, on the other side of the tracks, folks at Famous Dave’s are eating off of garbage-can lids. No joke! The new barbeque joint on Front Street offers adventurous diners the “All American Barbeque Feast,” a pile of lip-smackin’ saucy meat atop a humble platter. Restaurant-chain owner Dave Anderson has won multiple awards for his smokin’ recipes. Try his riff on Hawaiian huli huli chicken. 736 Front St., Lahaina, (808) 661-1125.

Congrats to Pulehu Italian Grill at the Westin Ka‘anapali Villas, which celebrated its first anniversary with a Chocolate and Truffle Decadenza. Executive Chef Francois Milliet’s chocolate-olive tapenade, spooned on fried monchong, proved so addictive guests begged him to bottle and sell it. Our chocolate-smeared fingers are crossed. Don’t fret if you missed this soirée; simply book seats at the February 3 ‘Aipono Wine Dinner, hosted by Pulehu. Call (808) 662-2655 to request the tapenade . . . er, to reserve seats.

Soup for you! The benevolent antithesis of Seinfeld’s soup Nazi, Sundya Ramachandran delivers pretty jars of soup to island doorsteps once a week. Her simple, tasty recipes pay tribute to her wholesome upbringing: as a youngster, Ramachandran woke before dawn to churn cheese, grate coconut, and grind flour with her mother. If you’d like a delivery of organic pumpkin-coconut bisque and sweet potato chipotle soup, log on to www.sundyasoups.wordpress.com. Thirty-two-ounce jars feed four and cost $16.

Way to grow, chefs. Private Chef Dan Fiske and Brian Etheredge, chef/owner of Capische restaurant, have been playing in the dirt at Kïhei Elementary—helping young farmers start a school garden. They’re following the lead of Chef Justin Pardo, who built Makawao Elementary’s garden two years ago, after opening Market Fresh Bistro up the street. Under this sort of culinary tutelage, the harvests will likely include budding line cooks, along with basil and bell peppers.

Cast all doubts aside; the land of milk and honey exists. It’s up a dirt road in Kula, where Mark and Leah Damon tend to sweet-tempered milking goats and busy beehives. The couple recently offered a free beekeeping workshop in cooperation with Upcountry Sustainability. Contact www.upcountrysustainability.org for future events. The Damons also sell ambrosial honey; visit their farm at 150 Pulehunui Road to stock up on sweetness. Luxury indeed!

Tell me what you eat, I’ll tell you who you are.—Anthelme Brillat-Savarin