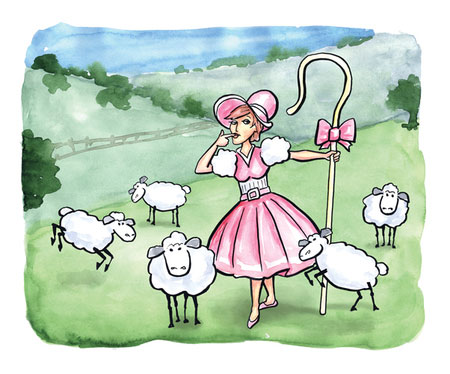 Baaaack off! That’s my leg o’ lamb! If you’re one of the lucky few to score a fresh cut of Haleakala Ranch lamb from Pukalani Superette, Morihara’s, or Longs Upcountry, expect a tug-of-war with less fortunate latecomers.  Distributed by Maui Cattle Company, this succulent new made-on-Maui product is in high demand. It’s so tasty, so tender . . . and no wonder! Raised in heart-stoppingly gorgeous Kula, watched over by a few trusty collies, those lambs have the life. . . .

Of course, you can always opt to have your local chops expertly prepared at Merriman’s Kapalua. This March,    Merriman kindly fed the masses lamb tacos stuffed with Ono Farms avocado at the second annual Maui County Ag Fair. Maui Cattle Company ranchers were regular celebrities at the fair, posing for photos in the Taste Education tent, while Chef Tom Muromoto of Ka‘anapali Beach Hotel spooned rotisserie-roasted lamb over a sumptuous Surfing Goat Dairy cheese polenta. Mmmm. . . . That’s a dish I’ll be dreaming about for a loooong time. Still, the winning recipe of the day belonged to Hotel Hana-Maui’s Chef Keoki McKee. His ‘ulu (breadfruit) croquettes with poha-berry sauce were addictively delicious. (Someone snacked on more than her fair share. . . . Oops!) The Hana gang’s pohole fern salad with edible flowers was pretty ono-licious, too. Go, East Maui!

Overall, this year’s Ag Fair was awesome. Periodic downpours didn’t stop local folks from packing Maui Tropical Plantation, singing along with Willie K onstage, and touring the Victory Garden’s painterly cascade of veggies and herbs. And how nifty was the catfish aquaculture display? Miz G learned that for around $1,000, you can install a mini fish farm in your backyard. Talk about sustainable seafood! Contact Maui Community College’s Sea Grant Program for info: (808) 984-3337.

The chef demonstrated how to prepare fresh chanterelles (first wash the millipedes off), then sautéed oyster mushrooms for a terrific edamame gnocchi dish. “Gnocchis are strange little temperamental animals,” says Tucker. “Everything from gooey starch bombs to ethereal pillows that disintegrate when they touch your mouth.” At the very least, the MCA students learned some new lingo.

You’re bound to learn some new lingo yourself when you attend the upcoming ‘Aipono Winemakers’ dinner June 9th at Lahaina Grill. Wine experts Charles Fredy and Richard Olsen III will expound upon choice bottles from California’s  top vineyards, which will be paired  with Chef Arnie Gonzalez’s culinary creations. Call 667-5117 to reserve seats.

Speaking of ‘Aipono . . . . This year’s ‘Aipono Awards tally was a real nail-biter for Gossip Gourmet! As our first 100 percent write-in ballot rolled off the printer, we wondered: would people still vote if forced to conjure up thirty different restaurants off the top of their heads? What if we didn’t get enough votes? What if, by default, Da Kitchen won in every category from Best Sushi to Best Italian?! You agree that would be a dilemma. But as it turns out, you—our well-fed readers—voted more voraciously than ever before. The ballot’s blank slate let you really cut loose. Bravo!

Winning examples: “Dale is an awesome waiter” accompanied a vote for Lahaina Grill for Best Service. Someone penciled in “picnic cooler at the beach” as a vote for Best Waterfront. Creative. One mother-to-be honorably refrained from citing her choice for Most Kid-friendly: “Have not had my baby boy yet, but will vote next year.” You Romeos out there claimed your own kitchens as Most Romantic. So saucy! (And very warranted, I’m sure.) The cynics piped up, too. For Best New Restaurant: “Wish there was one.” (Confidential to whoever voted the Sports Page for Most-Mauiest. Honey, if a sports bar with blacked windows is your island fantasy, it’s time to broaden your horizons!)

This bit of thanks rolled in with a Chef of the Year ballot: “When you find yourself completely emerged in your work and don’t see the light of day for weeks at a time, it is very rewarding to receive an award from your colleagues. It’s not an easy career. Thanks for supporting us; it really does make a difference.” Ah, shucks. Anything for you, maestros of the mess hall!

Best Blast from the Past: Azeka’s ribs! The beloved recipe will soon be revived, in a new restaurant slated to open next door to the former Azeka’s snack shop in Kïhei. When it opens, run, don’t walk, to get your grease on.

Cutest Display of Chefly Love: Forget the cutthroat contestants on cable TV’s Top Chef. On Maui, competing chefs can be downright complimentary. Case in point: Two of the island’s best chefs unknowingly voted for one another for Chef of the Year. Each praised the other’s superior skills. They don’t work in the same kitchen, nor have any ulterior motive for swapping votes. They simply admire each other’s style from afar. Sweet, huh?
Most Magical Mural: To the   amazement of all, Fiesta Time’s buxom Mexican revolutionary has reappeared on Lower Main Street. The senorita—let’s call her Lady Lazarus—was painted over when the south-of-the-border restaurant vacated the spot last year. Now she’s back—and so are Fiesta Time’s tasty fish tacos!  Gracias a Dios!

Best Economic Stimulus Plan (Silver): With the economy in deep freeze, foodies can take comfort in hot deals at Maui’s top restaurants. Enjoy 50 percent off the bar menu at Pineapple Grill on Thursdays. On Mondays, flash a Hawai‘i ID at Lahaina Grill or bring a canned good to Hali‘imaile General Store for 50 percent off entrees. From 5 to 6 p.m. nightly, sushi is half-off at Jacques in Pa‘ia. You can also score $39 prix fixe dinners at Ruth’s Chris, Mala Wailea and Gerard’s—that’s right, Gerard’s, the wonderful French restaurant just off Front Street that rarely ever advertises deals. Lads, take note. This is a great chance to wow your lasses without losing your wallet.
Best Economic Stimulus Plan (Gold): Hands down, the most entertaining promotion of the bunch is Chef Patrick Callarec’s very own “stimulus package.” On Sundays throughout May, diners at Chez Paul in Olowalu can spin the “wheel of fortune” for discounts: 20, 40, or 50 percent off, free wine with dinner, or your entire meal for free. Every player wins!
Most Promising Culinary Contest: If all the restaurant rumors come to fruition, we may have an all-star lineup in the ring for the title of 2010 Best New Restaurant: David Paul’s Island Grill; D.K. Kodama’s two new projects, Cuatro and Cane & Taro; and Bev Gannon’s latest venture (reportedly launching in the Seawatch’s location). Now that’s a heavyweight championship not to be missed!