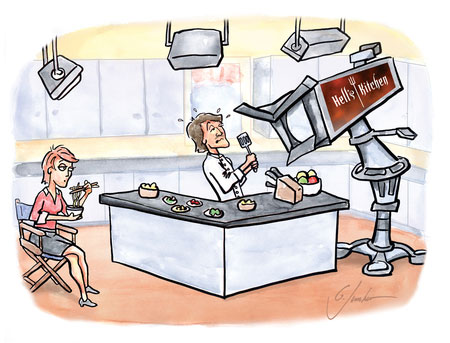 Wondering how to woo your gourmet valentine? Scoop up tickets to the opening gala for Key Ingredients: America by Food, a Smithsonian Institution traveling exhibit. Hosted by Maui Culinary Academy, the exhibit throws open the cupboards on 500 years of American food history, exploring everything from caribou meat to Capt’n Crunch cereal. “This is the first  really powerful, professional exhibit to come our way,” says MCA director Chris Speere. “We’re expecting all kinds of visitors.” (Who knows? Maybe Ms. Spam Hawai‘i will make an appearance.) The show runs February 14 through April 12. Admission is free. Tickets for the gala dinner are $125.Call 984-3578 for reservations.

Ooh la la . . . nothing tempts your Gossip quite like a roomful of chocolate! While the recent holiday festivities were indeed delicious, none trumped the phenomenal dessert buffet at last fall’s Noble Grape, a benefit for Maui Culinary Academy held at the Fairmont Kea Lani. After dinner at the Noble feast, velvet curtains parted to reveal a pastry wonderland: tiered trays laden with chocolate candies, ganache, tiramisu, tequila-filled truffles—forty-three different, delectable confections in all! Can you say choco-coma? (Miz G can. . . .) Prior to dessert, Academy alums took turns  sponsoring each course. Chef Jake Belmonte—the up-and-coming chef at Ko—produced an amazing miso kompachi topped with tempura lobster. . . . Mmm! Gossip loves it when newbie chefs flaunt their stuff at these charity events.

Speaking of flaunting . . . Nick’s Fishmarket’s Chef Maka Kwon was recently flown to Las Vegas to interview for Gordon Ramsey’s reality TV show, Hell’s Kitchen. “It was pretty nuts,” says Kwon. “They asked me, ‘Have you ever cried in the kitchen? When was the last time you got into a fight?’” Out of 150 interview- ees, our chef was among 15 asked back for an on-camera interview at the Luxor. (By press time, he hadn’t heard if he’d made the final cut. Our forks are crossed.) Kwon reports that Vegas caters to Hawaiians: Spam, rice, and saimin dominate Sin City menus. Like Chef Ramsey, however, he found that the kitchens didn’t always meet muster. Says the aspiring star: “I wish I could go in back at P.F. Chang’s and tell them how to cook rice!”

Maui gourmands desiring a weekend getaway should research the Four Seasons Resort Lana‘i: a promotional kama‘aina rate includes a $50-per-night dining credit. That’s worth its weight in gold—or calories. (If it were us, we’d gorge on the exquisite lamb at the Lodge at Ko‘ele’s Formal Dining Room every night.) Lest you fear that the Four Seasons is losing its upper crust by catering to the bourgeoisie, bear in mind that the newly renovated Lobby Lounge at the Four Seasons Resort Wailea claims Maui’s most exclusive cocktail: the “Maui Elite.” Peel $150 from your Balenciaga handbag for a shot of Louis XIII, Stoli Elite, and a touch of honey in a goblet rimmed with Maui cane sugar. Meow!

News bites: There’s a new head chef at Merriman’s Kapalua and we like his philosophy: “Food should be authentic and approachable, not too foofy,” says Chef Phillip Wang. “There is an inherent beauty in the ingredients themselves.” . . . D.K. Kodama’s new beachfront restaurant, Cane and Taro, is billed as plantation-era cuisine, but its encyclopedic menu reads like a global roll call. Alongside the usual suspects—Korean chicken wings, sushi, and kalua pork—there’s tagliatelle Bolognese, Vietnamese bahn-mi and pad thai. Too exotic? There’s always the iceberg lettuce “wedge”. . . .

Finally, are you one of those unfortunates who suffer from an extreme aversion to cilantro? There’s online support for you. Check out the cathartic anti-cilantro haikus at www.ihatecilantro.com. Sample: I thought I loved him/until I got my taco/filled with breakup flakes. Sigh. . . . Food never fails to move us to poetry!