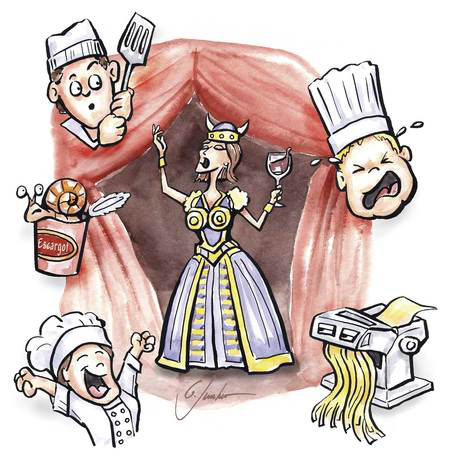 If you missed this year’s ‘Aipono Awards Gala, our annual benefit for the Maui Culinary Academy (MCA), just close your eyes and imagine: Pa‘ina Court decked out in 10-foot-tall tikis, palm trees, and plenty of vintage aloha.

A glittering reception hosted by Charles Fredy and Better Brands wound through the academy’s fine-dining restaurant and into its spit-shined kitchen. As usual, Miz Gossip used the opportunity to sidle up beside shy culinary students and press them for their opinions: Who earned their vote for Restaurant of the Year? Which chef would they most like to emulate? Freshman Ian Dihs voted for Outback Steakhouse, praising the prime rib.

When asked what he planned to wow us with after graduating, he clung to his spatula for dear life. “I don’t know. It’s only my first year!”

Cultivating a sharp-toothed ambition must be part of the academy’s syllabus; as the students progress, their competitive edge begins to show. Student Coral Mathison intends to infiltrate the elite ranks of the Vegas restaurant scene, because as she says, “not any Joe Schmoe can get in.” She chose instructor Chef Ben Marquez as Chef of the Year. “I give him a hard time,” she admits.

The favor is returned. MCA exams include high-pressure demonstrations of essential skills, such as cooking eggs six ways. Students are given seven eggs to perfectly baste, boil, scramble, and poach. If more than one egg cracks . . . it’s back to scrubbing pots and pans.

With only a year left to go, student Will Grogan’s confident he’ll make the grade. He plans to open his own restaurant: a tiki bar in Pa‘ia! Complete with a metal shark that blows smoke from its mouth! His split-vote for top chef goes to: Joey Macadangdang at Roy’s and Gregory Denton at Mala Ocean Tavern.

Downstairs, Chef Denton led apprentice chefs in preparing the evening’s first course: a baked tomato with Mala’s signature edamame guacamole. One of my tablemates, VINO’s General Manager Aaron Trujillo, noted that in unsteady hands, the oil and vinegar garnish became an unplanned vinaigrette. Sadly, Trujillo’s mind was on other things, having recently learned that his restaurant will close its doors this summer—a great loss to Maui’s restaurant scene. “We’re very proud of what we’ve done there,” says Trujillo. He cheered up considerably when he heard VINO called to the stage to accept the award for Best Wine List.

Ah, the pageantry of it all! Your gossip has long entertained fantasies of composing a RESTAURANT OPERA. An average night at any restaurant is riddled with drama, even tragedy. Heartbreak is routine. (Restaurants close . . . and chefs leave without warning to pursue corporate careers in other exotic locales.) Moral dilemmas are common fare. (Can I bear to eat another forkful of foie gras?) Costuming can be devilishly fun. Think of those poor resort banquet waiters dolled up in tuxedo jackets, bow ties, and stockings in the blazing tropical sun.

I know just the place to stage Act One: the lovely Le Petit Gourmand. Chef Patrick Callarec’s teeny new deli squeezed in beside Chez Paul is a slice of Paris. Stocked with clever machines to hand-crank fresh pasta, Arborio rice, and escargot in a can, it’s destined to be standing-room-only. The painted door claims it’s open 10 a.m. to 10 p.m., with lunch served from 11 a.m. to 2 p.m., but I’d call ahead (661-6620). Bon Appetit!