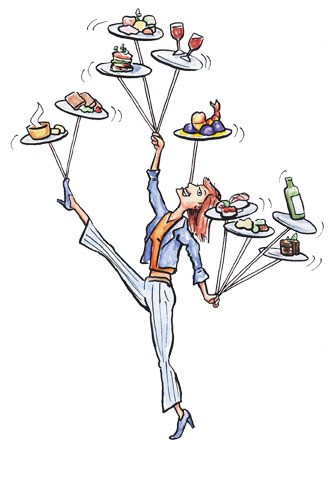 Balancing ballots, water bottles, and plastic plates precariously, five judges made the rounds. Our task? Sampling every dish at the spectacular Seafood fest, the culminating event of Kapalua Resort’s 28th annual Wine & Food Festival. MNKO sponsored the evening, offering awards for “Best of the Fest” and “Best Seafood.” Fifteen of the island’s top restaurants anted up two dishes each. That’s thirty, count them, thirty dishes to critique! Our humblest thanks to our guest judges: the charming Chef Robert McGrath of Restaurant REM, winemaker Bob Cabral of Williams Selyem Winery, and Michael Jordan, the global wine director for Walt Disney.

Trust us, judging was no piece of cake! Many dishes vied for the crown: I’O’s gorgeous golden beets (grown at their very own farm), Maui Culinary Academy’s innovative sous vide pork-belly sushi, and Hali‘imaile General Store’s meatloaf slider were each fantastic. Capische’s ‘ahi crudo would’ve won “Best Seafood” if a certain Southern judge hadn’t declared that sopping up the dressing required too much effort. Tough crowd, I tell you! Instead, Kai Sushi Bar stole the seafood honors with an exceptional kampachi carpaccio—a tongue twister pronounced “flawless” by the judges. “I try to use local ingredients as much as possible, says Executive Sushi Chef Tadashi Yoshino, who garnished his Kona kampachi with Maui onion and Kula daikon.

But one entry knocked our collective socks off. A delicious beauty, the curried Markea prawn on purple sweet potatoes by Pineapple Grill’s Executive Chef Ryan Luckey was the unanimous favorite, truly the “Best of the Fest.”

Once again, the Kapalua Resort folks pulled off a superlative affair. The four-day wine fest (June 11 to 14) was a smashing success. From Châteauneuf-du-Pape to Walla Walla Syrah, the world’s best wines and their secrets were spilled by the top names in the biz.

Wearing half a tuxedo, Master Sommelier Shayn Bjornholm emceed an oenophile’s version of the Family Feud. Bjornholm set the stage for hilarity when he strode in sporting a powder-blue jacket and cummerbund paired with shorts and loafers. Survey says! Guest contestants won prizes for identifying wines by their (the wines’) nose, legs, and fruit. (If that’s Greek to you, better sign up for a full roster of seminars next year.)

The festival’s demo lunch starred Chef Scott Giambastiani from Google. (If you haven’t heard, Google’s gourmet cafeteria is the envy of office workers everywhere.) Giambastiani dished up “berry g-zpacho” (as in “g-mail”; we kid you not). Served with goat-cheese ice cream, the chilled fuschia soup was a fun start, followed by a bright bite of wild salmon over sweet-pea puree. Simple, clean, and luxurious—no wonder Google rules the universe. A tip for you would-be celebrity chefs: Giambastiani rolled the salmon into pinwheels, and speared them with bamboo skewers before searing. The inner meat remained moist and rare. Googlicious, I must admit!

Fancy yourself a judge of fine fare? Head to Hana Bay October 23rd to sample a bonanza of breadfruit at the Aloha Festival. Cross your fingers that the Hotel Hana-Maui chefs bust out the unbelievable ‘ulu (breadfruit) croquettes they shared at the Maui Ag festival earlier this year. Those tasty tidbits alone are worth the drive.

Until we eat again, adieu!