To hear a former Kihei resident tell it, vacation rentals were one reason she left Maui four years ago. “People have a right to live in residential areas and not be imposed on by vacationers coming and going and making a racket, who are plain inconsiderate of people who have to get up and go to work.”

A current owner of a bed-and-breakfast, however, has quite a different impression of her guests. “They’re people who come here and want to be in the community during their visit, spend money locally and help keep areas like Ha‘iku country.”

Noisy or nurturing? A cottage industry that’s a source of jobs for local people or a drain on affordable housing that drives them off the island? Such arguments about transient, or short-term, vacation rentals (TVRs) have raged for years, but they’ve now been kicked up several notches as the County has simultaneously cracked down on nonpermitted TVRs and proposed a package of ordinances that in many areas will severely restrict them. Those who view these accommodations as a threat to their way of life have won the support of the mayor; those whose livelihoods depend on TVRs have taken the issue to the courts.

Over the past few years TVRs and bed-and-breakfasts have proliferated. Some are “‘ohanas,” auxiliary dwellings intended only as long-term rentals for one’s extended ‘ohana, or family—and thus outright illegal as TVRs. Then there are units in areas zoned for apartments, businesses and resorts, which allow TVRs.

“The vast majority of the 18,000-plus TVRs in Maui County are legal,” says Joseph Alueta, administrative planning officer with the county’s Department of Planning, who helped draft and review the legislation regulating  nonpermitted TVRs. Before 1991, he explains, only an apartment/condominium’s bylaws determined whether a unit could be rented out short-term, regardless of where the building was located. When the law changed, those older buildings were grandfathered.  “So if your condo was built prior to 1991, and its bylaws allowed TVRs, you could buy a unit there tomorrow and rent it legally as a TVR,” says Alueta. “If the bylaws forbid short-term rentals, you couldn’t. If your condo was built after 1991, and it’s not located in a hotel or resort district, short-term rental is illegal, no matter what the bylaws say.”

Finally, there are multiunit homes in agricultural, rural and residential areas. It’s these bucolic hideaways around which most of the controversy swirls. Everyone concedes that the permitting process that has faced TVR and B&B owners in communities like Pa‘ia, Ha‘iku and other places Upcountry has been a years-long ordeal of jumping through bureaucratic hoops, with television-reality-show odds of a successful conclusion. According to Dr. David Dantes, president of the Maui Vacation Rental Association (MVRA), over the last six years, only eight out of eighty TVR applicants have obtained a permit. Review by fifteen different agencies, three or four public hearings before approval is granted . . . the red tape created a backlog that both the Apana and Arakawa administrations wanted cleared up, but no bills successfully passed the council. 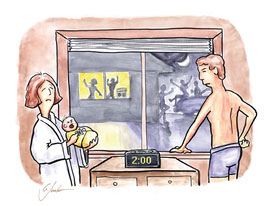 Meanwhile enforcement of the existing regulations was deferred, except when complaints triggered Notices of Violation. As recently as March 17, 2007, when yet another bill was filed away, it seemed the laissez-faire attitude would continue. Instead Mayor Charmaine Tavares and the planning department declared a grace period until January 1 of this year, during which all establishments without permits, whether their owners had never applied or were simply caught in the logjam, would be forced to “phase out operations.”

The mayor defended her decision in The Maui News as a way to find a balance among “community, environmental and economic goals” and sustain “treasured traditional neighborhoods.” Kula Community Association activist and retired college professor Dick Mayer told me that TVRs increase traffic on narrow rural roads and wear and tear on parks, “while we pick up the tabs for owners not paying the proper taxes.”

The owners of TVRs counter that only 2 percent of     complaints to the planning commission concern transient vacation accommodations. They also point to the negative publicity that’s been generated by the new enforcement actions—unfavorable PR that’s appeared everywhere from The New York Times to the Daily Travel Deal Blog, where members are asked if they’ll curtail visits to Maui because of the sudden lack of alternatives to the big hotels.

One can understand the disappointment of would-be Maui visitors, as places like Claudia Ledesma’s Hale Mauka Makai stop taking reservations. The grounds, tended by Ledesma and her husband, feature vibrant nurseries and 160 cultivated palms; the interiors of these rental units are lustrously decorated with Eurasian furnishings. Like all the TVR and B&B owners I contacted, Claudia spoke of many years of hard work—renovating her property, booking guests, cooking meals, and, purely from her sense of aloha, helping to arrange beach days for her guests—all vanishing with the stroke of a bureaucratic pen. She applied for a permit years ago, and, echoing what other TVR owners told me, she was advised to wait for a streamlining of the process, but paid over $800 and applied anyway. “Being of Swiss origin, I want to do things right.” 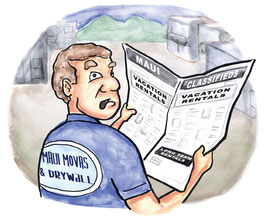 Ledesma’s permit may or may not be granted in time, but if new laws are passed, her domicile may not qualify as a bed-and-breakfast anyway, because the Ledesmas don’t sleep in the same house and cook in the same kitchen as their guests, regulations that she finds unrealistic “nowadays for romance travelers.” She says she stood up for the permitting process, but “all the bad apples who evade taxes will do it under the radar while taxpaying citizens are driven out of business. I’m not even talking about the emotional stress—vacation rentals are partly how I feed my family.”

Such businesses also feed other families on Maui. Dr. Dantes believes that a massive shutdown of vacation rentals could put at risk as many as 800 self-employed proprietor jobs and 600 support-staff positions in rural communities, the equivalent of the labor force of two to three sugar mills. And that doesn’t factor in the effect on North Shore restaurants. Beverly Gannon’s H¯ali‘imaile General Store is a nationally famous Maui dining institution that’s continually voted one of the best restaurants in Hawai‘i. yet Gannon told me, “Honestly, last month I was down 300 dinners. I have to look at the fact that I’ve had a lot of people come in who’ve had vacation homes or stayed at the homes. If they close down a few hundred vacation rentals, I may lose 12 to 15 percent of my business.”

To stop the new enforcement timeline, the Maui Vacation Rentals Association is suing the County of Maui for “due process and equal protection” violations and “breach of express and implied contract.” The association points to letters signed by then-Planning Director John Min during the Apana administration that indicate TVR and B&B owners would be allowed to apply for Conditional and Special Use permits until the tortuous permit process was legally simplified, and that there would be a moratorium on crackdowns (barring complaints and Notices of Violation) until such an ordinance was passed. Making the conflict even nastier, an earlier speech by Mayor Tavares, stating that the council “would not bring the hammer down and shut everybody down,” was posted by her opponents on that keystone of modern media embarrassment, YouTube.com.

In the middle and in the perennial hottest seat in Maui government is current Planning Director Jeff Hunt, who calmly sticks by the position that enforcement conforms with the law, the clear wishes of the council, and the intent of both the General Plan and town community plans “for the separation of tourist and residential areas.” He ingeniously compares the desire for a TVR crackdown to public outrage at the exemption from an Environmental Impact Statement granted to the Superferry. “There was never any guarantee      anyone could continue operating without needed permits. If you don’t like the laws, change them.”

Hunt and the council are attempting to do just that with a package of ordinances that will clear the bureaucratic underbrush by routing permit applications through the planning director’s office, restrict TVRs to resort, hotel and business districts, and preserve B&Bs in rural areas while more strictly controlling them in agricultural zones. But the MVRA believes that the bills simplify the process for a very limited number of B&Bs; impose rules, such as B&B owners having to share sleeping and kitchen quarters with guests, that are utterly unrealistic for modern travelers; and mandate in agricultural zones that a B&B’s land generate $35,000 annually in agricultural income, which for most owners would be impossible. As for restricting TVRs to resort and business areas like Makena and Wailea, that’s precisely where covenants, conditions and restrictions (CC&Rs) in most condo developments forbid them. And as Beverly Gannon mentioned, “I love the way people can come to Maui and experience something other than Wailea and Ka‘anapali. When I go to France or Italy, I stay in the bed-and-breakfasts of wine growers. Neighbors should have the chance to say they want B&Bs or don’t want them, and we should weed out people who shouldn’t be doing it with a good process. But many B&B owners are people who’ve lived here forever and are just trying to make ends meet. Can’t we come up with a solution?”

If there are any seeds of a compromise to be found, perhaps they’re in the position taken by the Maui Hotel & Lodging Association, which acknowledges the appeal of a “diverse mix of accommodation choices.” Craig Anderson, general manager of the Westin Maui, told me hotels don’t fear competition from TVRs, and he acknowledges “where the pain is” in the current enforcement process.

The Maui Hotel & Lodging Association believes TVRs should be “assessed and taxed on an equitable basis with hotels, timeshares, and resort condominiums,” and regulated the same way. Such rules would keep most TVRs open and lessen their negative impacts on infrastructure and affordable housing, as income generated from TVRs could conceivably help pay for such programs. Mike White, general manager of the Ka‘anapali Beach Hotel, is especially    concerned that TVRs jack up property values and taxes in agricultural and rural areas, and sap the affordable housing pool of rental units. “It’s not good to have too many TVRs in traditional bedroom communities. Our own employees are having difficulty finding apartments and houses, and all the hotels are having difficulty attracting workers. What are we doing to take care of the people who are working here?”

It’s a perennial tug-of-war on Maui: the needs of visitors versus those of residents, the preservation of a gentler and more communal way of life versus the entrepreneurial expansion of a tourist industry that every year becomes more vital to the island economy. But as Marty Herling of the Banyan Tree Lodge, one of the few successfully permitted B&B owners, asserts, “The County has to come up with a more definite answer in a timely fashion—they’re dealing with people’s lives.” Without more patience and less partisanship on all sides, the effort to bring the aloha spirit to    visitors could diminish it right here at home.

TVR or Not TVR

Throughout this article and in many articles written on the subject, the term “transient vacation rental” is used to refer to both TVRs and B&Bs. In general, TVRs are properties rented for fewer than 180 days by visitors not using the property as their primary residence. A B&B is a transient vacation rental where the owner/operator is onsite and often shares the same dwelling as the guests, presumably exerting a calming and controlling influence on their activities in the neighborhood. TVRs in the strictest sense are short-term rentals, whether houses or condos, in which the owner may be on the lot but not in the same structure where the rental rooms are located, or may be an absentee landlord.