But perhaps the canoe plants’ most important role was as spiritual mainstays in the life of the people; like the iridescent veins of an opal, the kaona—or hidden meanings of these plants—radiated through every aspect of Hawaiian society, and became vessels of faith. The kukui, for example, conferred in various ceremonies the kaona of enlightenment, guidance, and peace.

Many of the canoe plants are linked in sacred Hawaiian rituals to the major gods. Kalo is believed to have the greatest mana (power), for taro is the kinolau, or body form, of Kane, the procreator. Kalo’s ‘oha, its shoots or corm, are the basis of the word ‘ohana (family: “all the shoots”). The fertile ipu (gourd) is a body form of Lono, god of agriculture; the banana a kinolau of Kanaloa, god of healing and the sea; the coconut a form of Ku, the god of war. And there’s no distinction in Hawaiian healing between the spiritual and medicinal. The astringent purifying properties of turmeric radiate into its mana; it is the prime ingredient of a drink taken during the season of Makahiki to purge one’s being of negative aspects for the coming year.

From ‘awa, sipped in ceremony or as a drink to relax, to ornately decorated gourd rattles and drums used in chant and hula, the canoe plants retain a vital presence in Hawai‘i. Hawaiian doctors advocate a highly nutritious traditional diet based on poi, breadfruit, and sweet potato for obese and diabetic patients. Hawaiian Herbal Blessings offers medicinal products such as noni juice aged and fermented the traditional way. Spiritually, the kinolau plants and their rituals have been passed on, and the Hawaiian language is rich with the canoe plants’ influence, as when an impatient child is told “‘A ‘ohe hua o ka mai‘a i ka la ho‘okahi”—bananas do not fruit in a single day.

In trying to best husband, protect, and utilize the canoe plants as they’re modified by current conditions, Hawaiian farmers, herbalists, and cultural practitioners follow in the path of the kanaka maoli. Kahana Gardens embarked on a project that created a gorgeously verdant forest of 120 different cultivars of Hawaiian breadfruit to ensure the plant’s diversity and sustainability. Cultural practitioners say a prayer before picking a plant, says Maui Nui Botanical Gardens Executive Director Lisa Schattenburg-Raymond; the prayer serves as an act of respect to nature and as a request for permission from the gods to use the plant. “You don’t just take a plant,” she says.

The canoes may have berthed long ago, but the mission of the kanaka maoli—to bring the knowledge and wise stewardship of ancient plants into the future and adapt their uses to the present day—has not changed.

Additional information in this article was culled from Lynton Dove White’s Canoe Plants of Ancient Hawai‘i.

So What Is a Canoe Plant?

Just what constitutes a canoe plant, as opposed to an endemic plant, is a subject of lively debate among ethnobotanists and cultural practitioners. Ethnobotanical professor Isabella Abbott is a firm believer that Hawaiian agriculture was transplanted across the seas. In 1980 a comparison was made between plants mentioned in the older chants and those observed here when the French arrived; Abbott says the study suggests that between 20 and 35 plants were brought here from Tahiti or the Marquesas. Hawai‘i’s native flora, she says, doesn’t have starchy plants so vital to the Polynesian diet, such as taro and sweet potatoes. And as Hokulani Holt–Padilla, cultural advisor for the Maui Arts and Cultural Center, notes, there were a series of migrations that could have gradually introduced all the plants to Hawai‘i.

To learn more about Hawai‘i’s rich botanical history, visit Maui Nui Botanical Gardens at 150 Kanaloa Avenue in Kahului, or on the Web at www.mnbg.org. 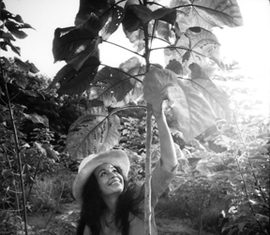 Kapa: Fabric of a Culture