The Hawaiians managed to find in the inner and outer bark of many plants the equivalents of cotton, flax, and hemp. The inner bark of wauke (paper mulberry), esteemed for its softness and lightness, was soaked and pounded into kapa, used for everything from men’s loincloths to hula dresses to sandals. Fibers from the hau tree, writes Abbott, also provided valuable cordage for uses ranging from lei-making threads to rope for hauling logs.

The master woodworkers of Hawai‘i made sure to bring with them shoots of bamboo, used for mats, containers, and musical instruments; the hardwood kamani, used for food vessels; the milo tree for ‘umeke ‘ai (poi bowls); and the beautiful kou for more highly prized calabashes.  Breadfruit provided kepau, a milky liquid used for caulking canoes. Juice from the candlenut tree was a principal ingredient in canoe paint; its sap made kapa waterproof; its nut was both medicine and food; above all, the oil of the nut provided light itself, when chains of kukui kernels were either set aflame individually or packed inside a length of bamboo and ignited as a lamp.

But perhaps the canoe plants’ most important role was as spiritual mainstays in the life of the people; like the iridescent veins of an opal, the kaona—or hidden meanings of these plants—radiated through every aspect of Hawaiian society, and became vessels of faith. The kukui, for example, conferred in various ceremonies the kaona of enlightenment, guidance, and peace.  [picture]

Many of the canoe plants are linked in sacred Hawaiian rituals to the major gods. Kalo is believed to have the greatest mana (power), for taro is the kinolau, or body form, of Kane, the procreator. Kalo’s ‘oha, its shoots or corm, are the basis of the word ‘ohana (family: “all the shoots”). The fertile ipu (gourd) is a body form of Lono, god of agriculture; the banana a kinolau of Kanaloa, god of healing and the sea; the coconut a form of Ku, the god of war. And there’s no distinction in Hawaiian healing between the spiritual and medicinal. The astringent purifying properties of turmeric radiate into its mana; it is the prime ingredient of a drink taken during the season of Makahiki to purge one’s being of negative aspects for the coming year. 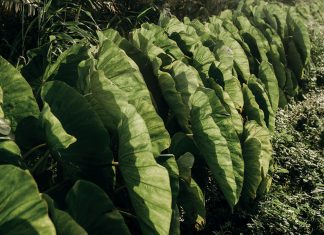 How Maui farmers are cultivating ancient wisdom to feed a population—and a hunger for culture.