The most important staples, kalo (taro, the source of poi), ‘uala (sweet potato), and ‘ulu (breadfruit) were also carried as provisions, both fresh and, in the case of poi and ‘ulu, dried for the later stages of the journey. Once in the Islands, the voyagers would eventually build lo‘i (paddies) for kalo; and elsewhere cultivate uhi (yam), the bitter ‘ape (elephant’s ear) for times of famine, and the most vital fresh fruits, niu (coconut) and mai‘a (banana).

Necessity was the prime criterion for canoe plants, but equally important to the amazingly skilled Hawaiian farmers was a plant’s versatility.  Coconut, for example, although not central to the Hawaiian diet, contains water, and its flesh or “meat” can be eaten at every stage of development, even at its most mature, when it can be grated and squeezed into coconut crème, mixed with pia (arrowroot) and ko (sugar cane), and baked into a delightful pudding called haupia. The tree itself was used by the ancient Hawaiians for housing, baskets, furniture, fans; and the fruit’s endocarp (inner shell) was cut open to use as a drinking cup for ‘awa (kava) and medicines. Banana plants also had many uses; the leaves could serve as roof thatching, and to cover imu (pit ovens) to contain their heat.

Ancient Hawaiians derived a number of medicinal uses from some of the Polynesian-introduced plants, writes University of Hawai‘i ethnobotanist Dr. Isabella Abbott in her book La‘au Hawai‘i: Traditional Hawaiian Uses of Plants. (Dr. Abbott cautions that information on medicinal uses for these plants and the prayers that accompany them is scarce.) Used alone or mixed with other herbs, these plants became virtual pharmacies. ‘Olena (turmeric), for example, is a cooking spice, but this type of ginger was also potent medicine, whose rhizomes (underground stems) were mashed, and the juice strained through kapa as an astringent for earaches and sinus problems. Ashes from burnt leaves of the ‘awapuhi, another type of ginger used for shampoo and ginger tea, were mixed with ashes from ‘ohe (Hawaiian bamboo) and juice from the kukui (candlenut tree)  to make a salve for cuts and sores. Pulverized ‘awapuhi rhizomes were combined with salt as a rub-on headache therapy.

The Hawaiian language itself is rich with the influence of canoe plants, as when an impatient child is told, ‘“A‘ohe hua o ka mai‘a i ka lā ho‘okāhi” — bananas do not fruit in a single day. 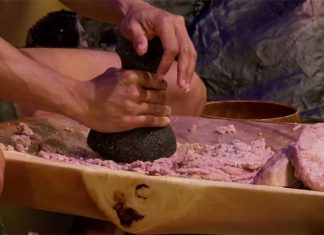 Watch as we transform a piece of monkey pod into a papa kuʻiʻai (poi board) during this workshop on Maui, hosted by the Hawaiʻi Farmers Union United.