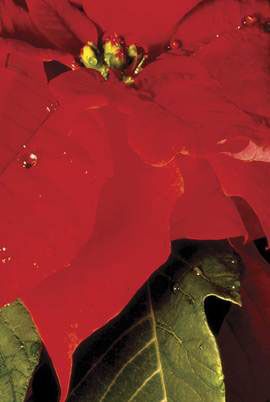 Bright red poinsettias have become a familiar sight in the Islands during the holidays. Ever the innovators, Hawaiians incorporated this exotic plant into their holiday celebrations. Lovely Hawaiian quilt patterns employ the red pointed leaves as inspiration. Poinsettia hedges planted around the island flush scarlet as Christmas nears. Some island households stack poinsettia plants in the center of their living room—a stylish replacement for a traditional Christmas tree. Where conifers can be troublesome to keep fresh over the tropical holiday season, poinsettias are well suited to warm climes.

The showy parts of poinsettias that most people admire as flowers are actually modified leaves, or bracts. The true flowers are quite small: tiny yellow pinpoints in the center of the brilliantly colored bracts. Poinsettias have been in Hawai‘i at least since 1919, when an O‘ahu naval officer mistakenly reported that his child died from eating the leaves. Poinsettias were deemed poisonous for nearly a century after. They aren’t—though their white sap does contain latex, which causes allergic reactions in some people.

Native to Mexico, poinsettias symbolized purity and sacrifice to the ancients Aztecs. They called the plant cuetlaxochitl, which translates somewhat morbidly as “mortal flower that perishes and withers like all that is pure.” Its blood-colored leaves were used in dyes, its milky sap to treat fevers.

When the conquistadores overthrew the Aztec empire, they also re-christened the poinsettia. According to folk legend, a poor young Mexican girl had no gift to present the Baby Jesus on Christmas Eve. On her way to the chapel, she gathered roadside weeds in a humble bouquet. When she laid them at the foot of the nativity scene, the weeds miraculously turned red. From that day forward, the plant was known in Mexico as flores de Noche Buena, or flowers of the Holy Night.