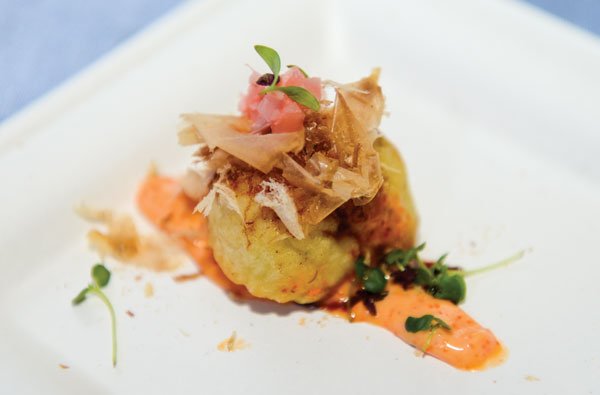 Kristen Dougherty is a Renaissance woman for the twenty-first century. The Maui Culinary Academy graduate is manager and catering chef for Sodexo (a company providing quality-of-life services), and has also been a tractor and forklift operator, farmer, and bartender. At an early age, Dougherty hung at the elbows of her Korean mother and grandmother, and her Irish father, cooking, tasting, and developing (though she didn’t know it then) her palate for future culinary creations. Working long, hard days on her family’s Kula onion farm early on, and a more recent seven-year bartending stint at Tiffany’s Bar and Grill in Wailuku, led her to pursue a professional culinary career. Her natural ability to marry exciting new flavors is evident in her style of cooking: a blend of Asian, European and American flavors, with an occasional touch of molecular cuisine to keep it fun and interesting.

In 2012, Dougherty was named an outstanding student at Maui Culinary Academy. Last June, she and four other Academy students surprised the judges of a blind food tasting at the thirty-second annual Kapalua Wine & Food Festival. Their version of takoyaki (octopus dumplings), a dish popular in Osaka, Japan, won “Best of Fest” at the Seafood Festival finale, hosted by Maui Nō Ka ‘Oi magazine.

“I love takoyaki and always eat it at Shirokiya when I go to Honolulu,” says Dougherty. “We decided to use a seafood combination of scallops, mussels, fish and shrimp, serving it with a spicy gochujang-tobiko aioli to give it a little kick. A roasted pineapple-soy glaze added a sweet-and-salty element, and it was finished with pickled ginger, bonito flakes, cilantro and shiso microgreens.” A thousand tasting portions later, this savory dish proved to be a keeper for the up-and-coming chef.

Besides working and volunteering for nonprofit catered events (most recently alongside famous Hawai‘i chefs for Whale Tales), Dougherty enjoys making bread and wedding cakes, and looks forward to someday having her own bakery/catering company. “I like seeing the looks on people’s faces as they enjoy the food I’ve prepared,” she says.

Get the Seafood Takoyaki recipe!