They are silent swimmers whose countenances seem to hold an unfathomable wisdom. Air-breathers like us, they are ungainly on land, but lyrical in the sea. Hawai‘i’s honu may be the most endearing reptiles on Earth. The question is whether they can also endure.

Lately the news has been good for these green sea turtles and the people who love them.

Not long ago, a plague known as fibropapillomatosis (FP) seemed likely to wipe out this already threatened species. But the disease is spontaneously regressing in individual turtles so severely affected by FP’s gruesome tumors that no one expected them to survive.

This reversal means that the limiting factor for turtle communities in the future may be there is simply not enough of their favorite food, seaweed (limu), to feed the burgeoning population, says George Balazs, leader of the National Marine Fisheries Service Marine Turtle Research Program in Honolulu. 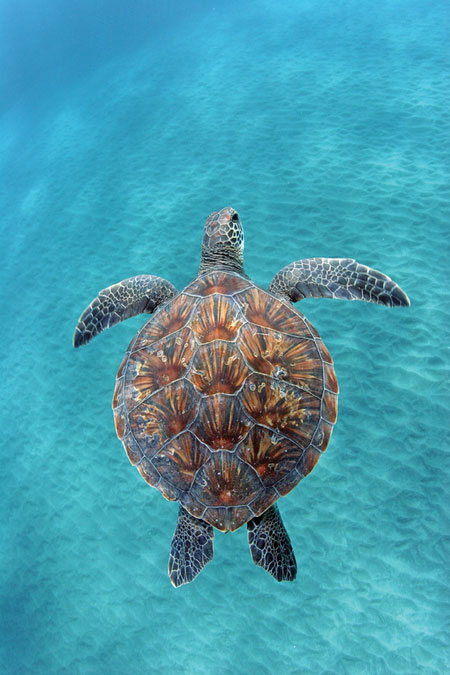 It’s a turn of events no one could have predicted a few years ago, when Hawai‘i’s green sea turtles endured growths that were painful just to look at: wart-like tumors protruding from the corner of an eye, or clustered in a grotesque garland around an outstretched neck.

FP is found in every ocean basin on the planet, affecting more than 90 percent of turtles in some places. At first confined to the green sea turtle, it has been reported in six of the world’s seven other turtle species. At its peak, the disease affected nearly 60 percent of Hawai‘i’s honu.

FP’s tumors, known as fibropapillomas, proliferate in eyes, mouth, nasal passages, skin, even on the apparently impervious carapace, or shell, and deep within the turtle’s body. In advanced cases, turtles show signs of chronic stress, starvation and immunosuppression, sometimes stranding their emaciated and dying bodies on island beaches.

“The prevalence and the case severity of FP disease have declined at a number of our study sites,” Balazs reports. “The disease may never vanish entirely from Hawai‘i, but rather stabilize at some low level. The effect of the disease on some individual turtles is admittedly just horrid—disfiguring and debilitating and deadly. However, some turtles recover, some get better and go on to live their lives.”

“The bottom-line good news of the FP disease story is that, by all means of evaluation, the Hawaiian honu population has grown to the point that it seems to be well on the road to biological recovery,” Balazs says. “In spite of the FP disease.”

No one could be happier about this turnaround than Balaz, who has devoted his life to turtles since the 1970s, and a couple who have become his allies in the fight to save turtles, Canadians Peter Bennett and Ursula Keuper Bennett.

In 1969, George Balazs watched fishermen at Lahaina Harbor load trucks with live sea turtles destined to become tourists’ dinners at Maui restaurants. Balazs, who had recently earned a master’s degree in animal science, wondered how many turtles there could be to supply such demand. A couple of years later, working at the Hawai‘i Institute of Marine Biology in Kane‘ohe Bay on O‘ahu, he needed baby turtles for research, and discovered that there was no local source. No one could tell him where turtles nested anywhere in the main Hawaiian Islands.

In 1973, Balazs made his first trip to the French Frigate Shoals at the northwestern end of the Hawaiian Archipelago to count nesting turtles. His studies then and in succeeding years made it clear that there were very few nesting turtles left even at this principal breeding colony. Balazs led efforts to establish state and federal protection for the honu, officially listed in September 1978 as “threatened” under the Endangered Species Act.

In the years since, the number of nesting turtles in the French Frigate Shoals has grown, along with respect for their value by the average Island resident and knowledge of their habits gained through the research of Balazs and others.

Then came the plague of FP, and it began to look as if the recovering species had been hit by a fatal infection that could wipe it out.

It was FP’s effect on turtles at their favorite diving site that turned the Bennetts from sport divers into careful researchers who have joined Balazs in his studies, and even presented scientific papers at international turtle gatherings. They document their work on an extensive and informative Web site, TurtleTrax—

For years, the Bennetts have spent two months each summer in Honokowai on West Maui, taking a break from his work as a technical writer and hers as a teacher in Mississauga, a suburb of Toronto, to scuba dive in warm water amid gardens of coral. They made their first turtle friend in 1988. They named the honu Clothahump (after a magic turtle in the Spellsinger series of fantasy novels) and took pictures of the youngster who was “healthy, engaging, and curious about us,” the Bennetts recall. “After our first encounter, we saw her almost daily for the rest of the summer.”

Diving almost every day, both grew to love the honu of Honokowai. All turtles are attractive, Peter says, but  “there’s nothing that matches the Hawaiian green sea turtle. They’re very graceful; they’re a joy to watch.”

In the next few years, though Clothahump greeted them as before, the couple began to notice something disturbing. Terrible tumors grew on the Honokowai turtles, the result, they learned, of FP. The Bennetts began to spend their summer vacations taking photographs of individual turtles and tracking the development of the disease.

In 1992, the Bennetts found “suspicious white spots” on Clothahump, and by 1993, their honu friend had developed full-blown tumors. “We both broke down and cried in five meters [17 feet] of water,” Peter writes on the Turtle Trax site. “We saw Clothahump only once in 1993, and we never saw her again.”

The Bennetts sought guidance from Balazs, and have worked with him ever since to tell the world about the problem of fibropapillomatosis. The Bennetts have meticulously documented not only tumor growth, but more recently and hopefully, tumor regression. They also have found that tumors can be predicted by studying the turtle’s eye, where early signs of FP first appear.

“Because we have so much video and photo material, we can go back in time to look for things we didn’t notice at first—very, very important to have been able to do that,” Ursula says. “A kind of retro-research helped us understand the eyes, especially.”

After their 2006 visit, the Bennetts reported on Turtle Trax that “at Honokowai, our own observations have shown that an encouraging number of honu with FP recover from the tumors—provided that they are big enough when they contract the disease. In the smaller (younger) turtles, FP is both more severe and faster progressing. Still, the overall prospects for the honu are much brighter than we thought a few years ago.”

“Now we know most improve–and we’re grateful because we can now relax and enjoy them,” Ursula says. “We didn’t really have that luxury before.”

At another dive spot near Napili, they find the plague in full force, but it’s not quite as horrifying. “It’s like stepping back into a time machine, going back six, seven years at Honokowai,” says Peter. “Most of the turtles have tumors. But we know a lot of these turtles will recover.” Having watched the rise and fall of FP at Honokowai, they can even recognize which individuals are getting better.

And one of Maui’s favorite and most famous honu appears to be free of the dreaded tumors, the Bennetts found last summer. Known as 5690, this supermom of a turtle has made a habit of breaking records, first as the only known green sea turtle to nest on Maui in decades and then as a champion egg layer, making up to seven nests in a season.

In 2006, the Bennetts spent many a long night on the beach just yards from Front Street where 5690 likes to nest, warning away potentially disruptive human passersby and documenting egg laying so that wildlife officials would know when to expect baby turtles to appear.

In early July, the couple were able to report to Balazs that, “When she was in her [egg laying] trance, Peter took the red light and inspected her all over. All body parts accounted for. Perfect eyes—meaning zero hint of FP.”

With protection provided by human admirers and a mysterious and spontaneous cure to an equally mysterious disease, it would appear that 5690 and her hatchlings face a more hopeful future than anyone could have predicted just a decade ago.