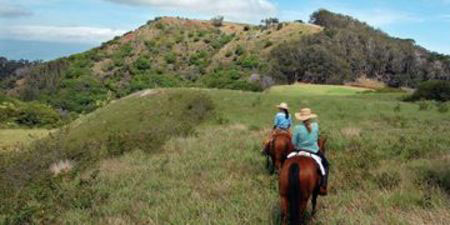 Although it’s just a short drive from Makawao Town, family-owned Pi‘iholo Ranch is an edge-of-the-earth experience where you can escape the sights and sounds of the modern world.

Vistas are free of houses and hotels as you ride through lush pastures and forested gulches. Sure, your guide may have a portable radio and iPhone strapped to her belt, but on an island where every year it gets more difficult to find isolation, Pi‘iholo Ranch gives you a chance to get lost in your thoughts and ponder how things must have been 100 years ago.

“You’re just minutes away from Makawao, but when you are in Pi‘iholo, you don’t hear any cars, no honking of horns,” Baldwin said. “You are in your own little spot. It’s just a beautiful piece of ground.”

I visited the ranch recently to take a private trail ride with Baldwin’s daughter-in-law, head wrangler Tamalyn Baldwin. Clad in light blue denim and a wide-brimmed hat, she greeted me at the ranch’s new, two-story headquarters. Clouds scudded across the bright blue sky as a trio of tall horses were saddled for our two-hour excursion. Joining us on the ride was Yvonne Biegel of Wailea.

Peter Baldwin and son Duke (Tamalyn’s brother-in-law) were taking care of business at the headquarters and stopped by to chat before we set off. Peter, who was recently inducted into Hawai‘i’s Paniolo Hall of Fame, talked about his upcoming trip to the Mainland, where he will compete in team roping events across the West.

Among Duke’s duties at the ranch is taking care of the nene pen, a project that sets aside a safe spot for the endangered native geese to breed and rear their young without having to worry about predators like mongooses, cats and dogs. Duke made plans to meet us during our ride to show us the pen and its bounty of native plants. He explained that the resident nene had flown the coop, but were expected back for occasional visits before returning next winter to lay their third-straight nest of eggs.

Once Tamalyn was assured we knew our way around a horse, she skipped most of the standard pre-ride briefing and helped Yvonne and me up into our saddles. She asked us to guide our horses around the corral and paddocks to get acquainted—and to see if we really did know what we were doing.

One thing about the horses at Pi‘iholo, you’re not going to be stuck on top of an old plug that hates to leave the barn. The string is made up of working cattle horses, roping ponies and retired polo ponies. My horse, Silas, is the one Peter Baldwin rides for cattle drives and brandings. I tried to show Silas I was boss, and even if he knew I was bluffing, he decided to play along.

Before we started, Tamalyn spoke with two other wranglers leading private tours on the 800-acre ranch that morning. When she learned where they were headed, we set off in a different direction. She says she keeps the tour routes loose and unscripted, in part, to keep the horses from getting “bored.”

“I think the horses like variety,” she said. “It’s good to mix it up for them. That’s why we have some rides where we have some trotting and some loping. They enjoy it and they do a better job. We like our horses to be able to do other jobs. If we have to move cattle, we can use them to move cattle. If it’s for roping, they can go rope. We have a couple of the horses that go out on the trail, but they are also used for pulling the wagon.”

An avid rider her whole life, Tamalyn has taken the lead in purchasing and training the ranch’s equine talent.

“The horses are very important to me. I take a lot of pride in them. If you have happy horses, you are going to have happy guests.”

I was happy when the modern world slowly slipped away as we left the headquarters behind and descended into a shaded gulch.

“You can spread out if you want to,” Tamalyn said over her shoulder. “We don’t have to stay close together.”

Silas quickly exhibited a penchant for closing large gaps by breaking into a quick trot, so I let him keep pace with Tamalyn and Yvonne’s mounts. In fact, my quarter horse was most happy when he was leading the way, his ears pricked up and facing forward in search of danger.

The ranch has about six miles of trails. The landscape is dominated by Pi‘iholo Hill, a tall cinder cone that borders Maliko Gulch. Maliko starts on the ranch, which includes several other deep ravines. The most beautiful is named ‘Ohi‘a Gulch for its preponderance of the flowering native trees. There are also rolling pastures dotted with the ranch’s new specialty, Corriente cattle. The multicolored, horned and wiry bovines are raised as roping stock for rodeos around the state.

The Corriente cattle and trail-ride businesses are just the latest incarnations of a ranch that has been in the Baldwin family for 130 years. Peter Baldwin said the Pi‘iholo pastures were acquired in 1888 as part of Haleakala Ranch, after they had been cleared by logging and attempts to grow sugar cane.

“In the early years of the ranch they they were running cattle,” says Peter, “but by then the land had been overtaken by waiawi [guava], which are very aggressive trees. Samuel Baldwin spent three years clearing the lands with a Holt tractor.”

In later years, cattle from the Baldwins’ Haleakala Dairy were moved onto the land, and tall Napier grass was planted for forage. Baldwin remembers that when he was a youngster, “Haleakala Dairy workers were out there with a sickle, cutting Napier grass and hauling it in to feed the dairy cows. Shortly after that, I’d say it was in the 1950s, ‘cutting cane’ was discontinued and my dad started running two-year-old beef steers out there. Haleakala Ranch had its own slaughterhouse and we were selling to the local markets.

“The slaughterhouse closed in the1960s and we used the area for growing dairy heifers. As the dairy started getting more concentrated [keeping cows in pastures close to the dairy], we began leasing the area out to local ranchers.”

Peter Baldwin served as president of the dairy and oversaw its operations until it closed in 1999 and the dairy cattle were flown to O‘ahu. In 2000, he retired as Haleakala Ranch president, and now concentrates on Pi‘iholo Ranch’s activities.

Along with the popular trail-riding business, these include roping events, horsemanship clinics and western horse shows in its new arena. Trail rides are not suspended during the events, and customers are invited to hang around after their rides to watch the action. A zipline adventure tour is in the works and is expected to open for business later this year. The ranch also has a western-wear store in Makawao.

Tamalyn Baldwin says one key to the ranch’s success is to treat customers like friends.

“People come back from the ride and they say how spectacular the views are. People who have ridden all over the world say this is the best ride they have ever been on. We spread out. Every ride we take, we try to treat people like we are taking our friends out. It’s a place where people can get away from the hotels and the beaches and see what Upcountry Maui is like. It’s a very quiet retreat, it’s a peaceful ride, and people love it.”

My two hours atop Silas seemed to gallop by quickly. We intersected briefly with one other tour group, and stopped by to take a tour of the nene pen, but for the most part, we were left alone to ride and drink in the crisp, clean air. It was easy to imagine a Maui without cars, phones or deadlines as the trails of Pi‘iholo led us back in time.