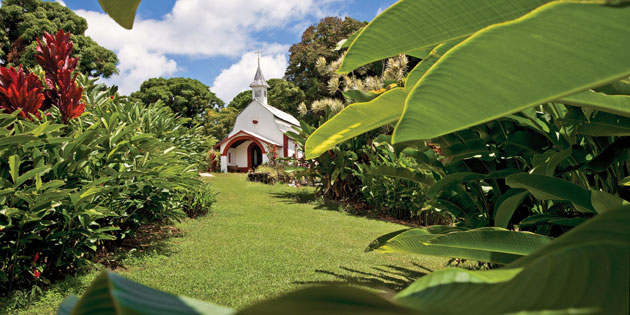 One way to circuit the historical churches of Lahaina is to begin at the Jodo Mission—on the seaside north of town—then drive Front Street through all the frolics past Prison Street to Holy Innocents’ (ocean side, 561 Front St.). An early expression of Anglican faith in the Islands, this church was launched in 1872 on a nearby spot, then built anew at the current site during the 1920s. Its interior is adorned with wonderful Hawai‘i-themed art and woodwork. Continue from here and go left at Shaw, then left at Waine‘e. Now you’re at Waiola—first the historic cemetery, then the church itself with its monument to Keopuolani. Next-door is Lahaina Hongwanji Mission with its pagoda-like spires. This center of Buddhism began as a small school and temple in 1910. The present building was erected in 1927. Continue on Waine‘e Street to find Maria Lanakila (Our Lady of Victory), a Catholic mission established here on the corner of Dickenson Street in 1846. Its first humble huts were replaced by the current stone edifice in 1873. Turn left on Dickenson, then left again on Luakini to find the Buddhist Church of Shogun Mission, a simple yet symbolically grand wooden structure built to inspire the Japanese who labored in the sugarcane fields.

Upcountry to the Sea

Start this tour in Keokea (mile marker 17 on Kula Hwy.), ideally with some fortifying kaukau at Grandma’s Coffee House. Almost directly across the street from Grandma’s is Our Lady Queen of the Angels, a Catholic parish church built shortly after the 1936 construction of nearby Kula Sanatorium. A little farther north, on the left, is St. John’s Episcopal, built in 1907 to serve the Chinese community that settled this area in the mid-1800s. Stop and walk the thirty-six-foot-diameter, Chartres-style labyrinth in the St. John’s parking lot. Drive north to the intersection with Cross Road to find Haleakala Hawaiian Church, now roofless, but still hosting Sunday services as it first did in 1853. (The gate is locked, but you can walk up.) Continue north about five miles to Holy Ghost Mission; the unique octagonal structure is obvious uphill of the highway. Watch for the sign indicating the turnoff.

Back on Kula Highway, continue your descent to Makawao Avenue and turn right, heading north to Maui’s historic cowboy town. Near the intersection where Makawao Avenue crosses Baldwin Avenue/Olinda Road are three historic churches that represent distinct elements of Maui’s cultural tapestry. On the right, before you reach the stop sign, you’ll see Makawao Hongwanji Mission, a 1907  Buddhist center. Just north of the crossroads is St. Joseph’s Catholic Church and School, a bulwark of Upcountry Maui’s thriving Portuguese population. The present structure dates to 1911, although the church’s presence on this site is decades older. (You’ll see beautiful stained glass—if you can get inside).

Half a mile mauka (uphill) from this intersection is a starkly simple church, Po‘okela, built in 1843 by Rev. Jonathan Green, whose antislavery passions caused him to sever relations with the mission that had sent him here.

Drive down Baldwin Avenue to Pa‘ia. About halfway there, below Rainbow Park on the right side of the road, the brown stone edifice of Makawao Union Church dominates the landscape. About a mile below that, the red-trimmed church on the left is Mary Queen of the Holy Rosary, built in 1926.

Once you’re in Pa‘ia town, look for the unmistakable Tibetan stupa, a spire-like sacred monument, on your right. The Maui Dharma Center is historic here not because it has been on the site for decades, but because the Dalai Lama himself came to Pa‘ia in 2008 to dedicate this new shrine.

At the bottom of Baldwin Avenue, head right on Hana Highway for about a mile to find a pair of churches across the road from each other. On the right is Pa‘ia Hawaiian Protestant Church, a simple wooden meeting hall built in 1880. Directly on the shoreline is one of Maui’s most beautiful settings—Pa‘ia Mantokuji Soto Zen, built in 1906. There is artistry here in every detail, not only in the beautiful building and the magnificent temple bell but also the many carved-stone features and the Zen garden.

Here’s a beautiful drive with a reverential theme: drive the belt road around Haleakala, stopping at these historic churches.

Head east on Hana Highway through the windward (North Shore) community of Ha‘iku. Hana Highway’s mile markers start over again at the intersection with Kaupakalua Road; after they do, turn left at the Huelo road, just before mile marker 4. You will quickly find Kaulanapueo Church, built in 1853, a hefty gray structure built of mortared uncut stone. It’s Wuthering Heights with coconut trees. Halfway to Hana town, at about mile marker16 just after Ke‘anae Arboretum, make the left at Ke‘anae Homestead Road and find Ke‘anae Congregational Church. Built in the 1860s, this is a fine example of early stone missionary construction with double-hung windows and a small rectangular steeple. The Wailua Homestead Road at mile marker 18 leads directly to St. Gabriel’s Church and Our Lady of Fatima Shrine.

As you begin to enter Hana town (mile marker 31), turn left at ‘Ulaino Road and drive the mile or so till the paved road dips into a streambed and comes out at Kahanu Garden. In old Hawai‘i, the heiau (temples) were capitols of both secular and spiritual authority, and Pi‘ilanihale Heiau (located within this immense garden) is the grandest of them all. In the center of Hana town is the simple yet stately Wananalua Church, built on an old heiau site.

About four miles past Hana town, a well-marked detour on the right takes you up to St. Peter’s, an old Catholic church in the district called Pu‘uiki.

From here the road twists through the national park area at ‘Ohe‘o Gulch, then into Kipahulu. Just past mile marker 41, look for the sign that says Palapala Ho‘omau Church, a left turn into jungle. This is where famed aviator Charles Lindbergh was buried in 1974; the church grounds adjoin a small county park in a spectacular setting. The little church itself, built 1857, comprises a small shadowy sanctuary within massive limestone walls—a missionary-era gem. About twenty miles beyond Hana, out in dry and dramatic Kaupo, you can’t miss the antique Catholic church called St. Joseph’s, isolated on a sea-thrusting point, a two-tiered stone structure from 1862, amazing for the isolation of its location, like an ark that sank to land wherever the good Lord placed it. After traversing the bold drylands of leeward Haleakala, the road rises to pastures at ‘Ulupalakua. Look for St. James the Less, a Catholic church on the left. The present structure dates to 1950, but this site was a chapel and travelers’ respite for at least a century before that.

Start at the intersection of Main and High Streets, the island’s true capitol, whence the ali‘i proclaimed their laws as do today the county and state bureaucrats and bigwigs. It’s a logical place for the first missionaries to have erected their Puritan-prim Ka‘ahumanu Church, starting in 1842 or so—you can find the ruins of the old belfry in the church’s back parking lot next to a port-a-potty. The clock on its spire (still working) seems to be announcing the hour to the state building across the street. Take High Street to Vineyard and turn left to find ‘Iao Congregational Church. The structure itself is not antique, but it sits on a historically significant site—the former Koran Jo-juku (Fragrant Orchid Girls’ Boarding School), also known as the Kanda Home. During the early decades of the twentieth century, hundreds of Japanese children were educated here in the ways of their native culture. If you get back on High Street and drive past Main Street and just past the Wailuku Public Library, you’ll find the dark-gray, rough-cut-stone eminence of Wailuku Union Church. Although the current edifice dates to 1911, its history runs back to the earliest missionaries of the 1830s, zealots who are depicted in this building’s stained-glass windows.

Turn around and make the right at the light onto Main Street, then watch on your left for Good Shepherd Episcopal, located just after Mc Donald’s and exactly on the corner of the not-coincidentally-named “Church Street.” The founding rector of this very community-caring church, the Rev. George Brayton Whipple, served here from 1867 to 1874. Continue down Main and make a left at the Central Avenue signal. After a block, spot the Wailuku Jodo Mission on the left, with its two floating staircases leading up its ornate, Islamic-looking façade. This structure dates back to 1915. Turn right at the next intersection onto Vineyard—these streets are narrow—then creep down two streets and stop just before the second, which is Kaniela. Pull over and look to your left, and you will be face to face with Wailuku Hongwanji Mission.

From here take Kaniela to Mill Street and brush past St. Anthony’s Church and School, center of a Catholic parish that has educated many of Maui’s most prominent leaders. The mission of Saint Anthony of Padua celebrated its first high mass here in a thatched structure in 1848, under siege from the disapproving Congregational authorities.

To put that old religious tempest into its appropriate teapot, drive down Lower Main, turn left at Waiehu Beach Road (at Burger King), then cross the dried-out Wailuku Stream. Turn left at the first street (Kuhio Place) then left at the next and drive up to the state monument called Haleki‘i-Pihana Heiau. Standing there, imagine that you are Kahekili, the last great chief of Maui to rule before the outer world and its concepts eclipsed the Hawaiian cosmos.