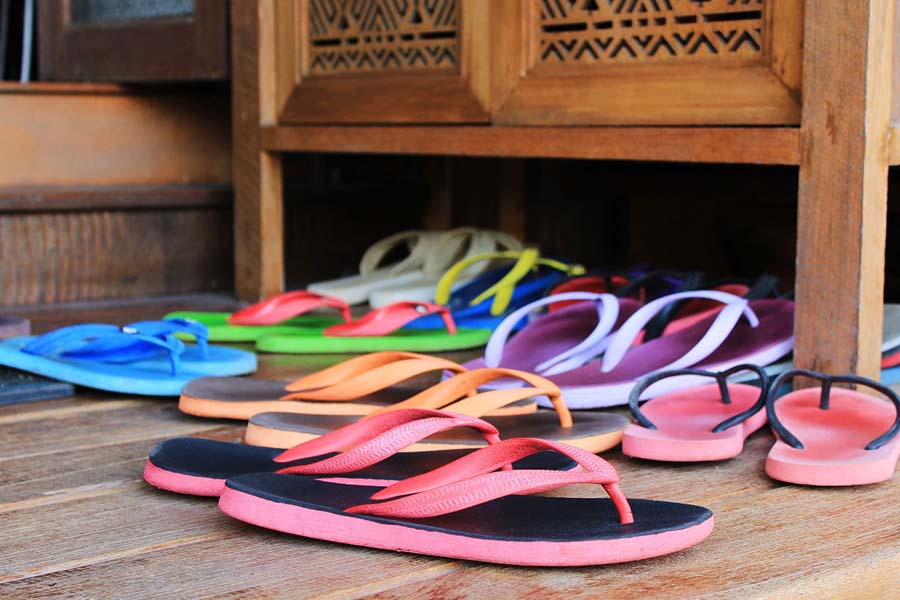 In Hawai‘i, they’re everywhere: waiting obediently by the door, overflowing the patio at parties, slapping along on a million happy feet. They’re the world’s simplest shoes: Take a flat rubber sole, poke a Y-shaped thong through the front, secure the arms of the Y to the sides and you have the basic Hawaiian slipper.

Some islanders call them “zoris” in deference to the slippers’ Japanese ancestor, but they go by other names as well: thongs, flip-flops, go-aheads, gong-jongs, or the basic pidgin “sleepah.” Whatever you call them, if you’ve spent more than a few hours in the Islands, you probably own a pair. Feet down, slippers are the 50th state’s most popular footwear. But why? Why do these flat, unassuming and (mostly) unadorned rubber walking platforms outsell all other footgear in Hawai‘i?

“They’re as comfortable as being barefoot, but safer,” offers one Upcountry mom whose plantation-style front porch is usually ankle-deep in her sons’ slippers, their friends’ zoris and the occasional “found” flip-flop that floats around the neighborhood like a ghost mournfully seeking its mate.

Although the ancient Polynesian settlers wove tough kama‘a hakahaka (openwork shoes) from twisted plant fibers, Asia is the likeliest source of Hawai‘i’s slipper habit. The classic “rubbah sleepah” — with no heel or ankle strap and a thong splitting the big toe from its four mates — likely evolved from zori and their clogged wooden cousins, the geta, both of which were worn in Japan for thousands of years. These footwear styles clacked into Hawai‘i in the late 1800s on the feet of 20,000 Japanese contracted sugar laborers: geta were worn for casual occasions while cloth-covered zori were reserved for more formal events. During World War II, the stately Japanese zori met the G.I.-issue American “shower shoe,” and the rubber slipper slapped into the world.

Having already absorbed from their Japanese neighbors what cultural historian John DeFrancis called “the eminently sensible practice of taking off one’s shoes on entering the house,” islanders proved the perfect beta-testing site for the new footwear. It was much simpler to slip bare feet into waiting slippers rather than pulling on socks and tying laces. And you didn’t even have to break stride to put them on.

“It’s a symbiotic thing — my feet create the slippers, and the slippers create my feet,” says one O‘ahu resident. “If you grew up wearing them, you develop prehensile toes to keep them on. Because of my slippers, I can pick up a big, fat flashlight, a pencil or a dime with my toes.”

He then demonstrates these mighty talents in turn, though the dime gives him trouble. “Okay, a nickel then,” he concludes. “The point is, my feet aren’t meant to be limited by shoes. These are island feet, not mainland feet.”

“You know, mainland feet — the ones that look like a naked body, exposed and plump and pale, and somehow it’s wrong to gaze upon them,” he says sadly.

After much discussion about slippers with several more island friends, it becomes apparent there are two camps. One group buys only $4.99 drugstore brands because inevitably, the shoes get lost under steps or chewed up by dogs; the other buys fancy $35 “surf shop” slippers (e.g. Sanuk, OluKai, Reef) with combat-tough canvas thongs and hearty soles that last.

A neighbor shrugs. “I got tired of having my good ones walk away at parties, so now I just wear these.” He waves vaguely toward the porch, then looks puzzled. “Hey, where’d I leave them?”