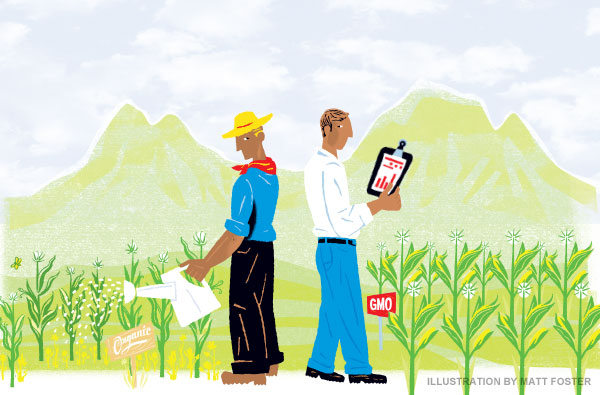 Last November, by the slender margin of 1,077 votes, Maui County residents passed a moratorium on genetically modified crops. The bill was historic for two reasons: it was the first citizens’ initiative ever to make it onto the Maui County ballot. And it spurred the most expensive campaign in state history. Global biotech companies spent nearly $8 million fighting this measure, outspending local activists by more than eighty-seven to one. Still, the moratorium passed.

The debate leading up to voting day was contentious, riddled with misinformation on both sides. In its wake, many islanders wonder where the truth lies and where we go from here.

The new law is currently tied up in litigation. If it survives, it will require anyone seeking to grow genetically modified organisms (GMOs) in Maui County to first pay for an environmental and public health impact study. Conducted by an independent party, this study will investigate whether pollen drift from GMO fields contaminates neighboring plants; how pesticides used on GMOs affect the soil, air, groundwater, and marine resources; and whether any connection exists between GMO crops and birth defects. If the study concludes that cultivation of GMOs poses no environmental or health hazards, they’ll be allowed.

But let’s back up. What exactly are GMOs? I ask Dr. Sally Irwin, a geneticist who teaches at the University of Hawai‘i-Maui College. The amiable, energetic professor grew up in Michigan, surrounded by farmland, and dreamt of someday fighting hunger in Africa. When she discovered genetics, she says, she fell in love. Since the dawn of agriculture, humans have meddled with genetics: crossbreeding plants or animals to obtain offspring with specific desirable traits. But in the 1970s and ’80s, scientists discovered they could skip the imprecise, time-consuming mating rituals. Instead, they could isolate genes from one organism and insert them directly into another organism’s DNA using either a “gene gun,” common bacterium, or virus. This new science is called biotechnology; its results are genetically modified organisms, or GMOs.