Dodging fast-moving clouds, our pilot touches down on a platform no larger than a king-sized bed. The helicopter roars away, leaving behind two photographers, an awestruck writer (me), and our guide at the 5,788-foot summit of the West Maui Mountains.

We’ve come to see what few humans have ever experienced: a miniature forest that exists here and nowhere else on Earth. The ground in every direction looks like an artfully woven haku lei. Nothing is amiss; no power lines or guardrails mar the edges. Stunted by centuries of too much wind and rain, too little oxygen in the soil, full-grown, native ‘ohi‘a trees are just six inches tall, yet triumphantly push forth full-sized blossoms.

These bog plants have big personality. I sense them sizing us up as we blink through the fog, thick droplets forming on our eyelashes and camera lenses. For the time being, the ‘ohi‘a, lobelias, lichens, and mosses are unconcerned with our presence; they have us surrounded.

Welcome to Pu‘u Kukui—the “Hill of Enlightenment”—what the world might look like if plants ruled. Today our small media expedition has the honor of following Pu‘u Kukui Watershed Preserve Manager Randy Bartlett on a two-mile hike through plant heaven, so that we may share it with you.

The summit of Mauna Kahalawai (the Hawaiian name for the West Maui Mountains, it means “shedding of the waters”) is a place relatively few of us have heard of and fewer will visit. Defended by shifting walls of clouds, knuckle-whitening cliffs, and 350 inches of rain a year, Pu‘u Kukui has been spared human intrusion.

With rare exception, only scientists and a three-person work crew are permitted to visit. For good reason: this is our water factory. One of the rainiest spots on earth, Pu‘u Kukui serves as an essential water-catchment system for West Maui. For the system to work, its plants need a pristine environment.

Just over half the height of Haleakala, Mauna Kahalawai is staggeringly steep, giving the impression of being only a hand swipe from Heaven itself. Vistas appear, then vanish in white cloud. Kapalua is momentarily visible down below, and Moloka‘i on the horizon.

I peer over the eastern edge. A rolling green fabric plunges down into the remote reaches of ‘Iao Valley, punctuated by impossibly steep peaks. Early Hawaiians rarely visited these heights, considered wao akua, or realm of the gods. Only kahuna (priests) and kia manu (bird catchers) ventured here, after following special protocol. 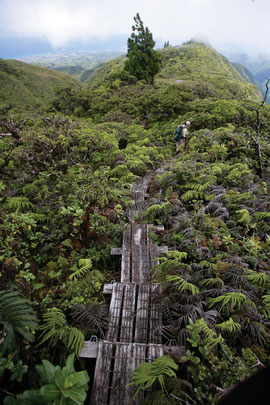 Our modern-day protocol is to stay on a 16-inch-wide boardwalk, built to enable researchers to monitor this site without crushing it underfoot. Composed of decayed plant matter, bog soil is so dense a single footprint can linger for decades. Carbon dating has revealed that each foot of bog represents 10,000 years of accumulated growth. At its deepest, the bog measures some 14 feet—140,000 years of plant evolution.

Beyond the moss-covered limbs of full-sized trees, a Lilliputian forest awaits at the boggy summit of Pu‘u Kukui.

This place is ancient; these plants far predate the arrival of both Captain James Cook and the Polynesians.

The water-soaked, high-acid soil causes plants to grow as dwarfed versions of their regular selves. They’ve used adversity to their best advantage. Century-old ‘ohi‘a trees are perfect bonsai here. The miniature trees nestle in amongst lichens, mosses and shrubs, creating an unbroken tapestry of brilliant blooms and silver-tipped leaves.

This Lilliputian canopy lured renowned botanist D.T. Fleming to blaze a trail to the summit in the 1920s. He marked the ridge with Japanese Sugi pine trees, to keep early explorers from inadvertently pitching over the thousand-foot cliffs—a likelihood in this blinding fog.

He found deep-throated lobelias and greenswords (cousins to Haleakala’s silverswords), endemic marvels that exist nowhere else on earth. But this plant wonderland was imperiled. 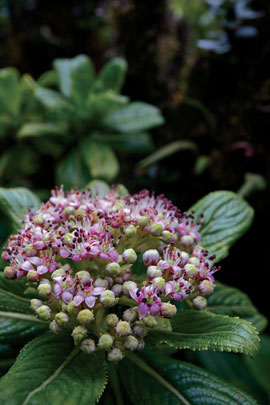 Common weed or the planet’s last greensword—they’re all the same to a wild boar rooting for earthworms. By the 1980s, feral pigs roamed all the way to the summit. The fragile bog faced devastation.

In 1988,  current landowners Maui Land & Pineapple Company, Inc. (ML&P) created the 7,368-acre Pu‘u Kukui Watershed Preserve and began active restoration. Thanks to the cooperative efforts of ML&P and the Nature Conservancy, the vast majority (80 percent) of the preserve has been pig-free for more than five years.

ML&P’s field crew also built the boardwalk, which traces the top two-and-a-half miles of Fleming’s trail. The Herculean feat was accomplished over 10 years amidst chilling rain, constant wind, thigh-high mud, and the pressure not to damage even the slightest plant. Their efforts saved the bog from certain destruction.

“It would’ve been chowder,” says Bartlett. “Just from a couple of guys coming up once a month to read the rain gauges.”

Moss, lichens and oversized Hawaiian plantago have begun reclaiming the small green patch where lumber was flown in. The ancient ecosystem is slow to recover. Luckily, it’s been given the chance.

This year ML&P will add another 3,033 acres to the preserve, increasing the size of what is already the largest private nature preserve in Hawai‘i to 10,401 acres—nearly half the company’s landholdings on West Maui.

Bartlett has been with the preserve since the beginning. In his spare time, he chairs the Maui Invasive Species Committee, an organization tasked with defending Maui’s shores against aggressive alien plants and predators.

While tough on pests, he’s crazy for flowers. He’s worked on this mountain for years, but the plants’ magic still gets to him. He remembers individual blooms along the boardwalk, the most photogenic geranium, for instance. Each time we pass a blooming lobelia (about every 10 feet) he snaps a photo. He must have thousands of shots back in the office.

The battle to save endangered ecosystems apparently demands this kind of devout passion.

As we follow the boardwalk, mist races towards us, building and evaporating in swirls. Periodic breaks in the clouds reveal the opposing cliff walls awash with waterfalls. Sun spills down and, briefly, Violet Lake emerges from the fog.

One of the most sacred bodies of water in Hawai‘i, Violet Lake, or Ki‘owaiokiha, is the mountain home of Kihawahine, a mo‘o (lizard) goddess and ‘aumakua (guardian spirit) of Princess Keopuolani.

The lake is a unique ecosystem itself, yet to be thoroughly studied. “Violet” refers to both the color reflected by the lake’s dark waters and the rare flower populating its banks. Bartlett encourages me to stop and smell the Viola mauiensis, the endemic Maui violet. Kneeling down, I push my nose right up to the tiny flower. The strength of the scent is amazing, a full, heady fragrance designed to seduce pollinators—damn the wind, rain and utter remoteness of the place.

This flamboyance is what makes these plants so admirable. They devised ways to survive on this soggy, rugged peak, not quietly, but with all the bells and whistles blowing.

Take the lobelias. They’re one of the few species that break above the six-inch canopy. A single thick stalk rises up about two feet, topped by a silver-green pom-pom, looking like a spazzy cheerleader drawn by Dr. Seuss. From the pom-pom bursts a tassel of magenta blossoms. Some lobelias break whatever rules remain here in plant heaven, and toss out two, even three, flower tassels. Now is that really necessary? I can’t help but anthropomorphize the plants up here—they seem euphoric, like they exist just for the pleasure of it.

Plants aren’t the only inhabitants of the preserve. On a flat leaf I spy a minuscule tree snail, its tight cone hat small enough to be mistaken for a twig. We pass more snails the size of thumbtacks, dark brown and splotched with brilliant copper. These incredible creatures bear live young—a fully formed baby snail emerges from under the parent’s  shell. They slowly wander their wet leafy home, oblivious to the pace of modern life below.

Owl pellets (a polite term for regurgitated fur and feathers) litter the boardwalk—proof that the preserve’s top native predator, pueo, is still on the hunt.

Hawaiian honeycreepers such as ‘amakihi, ‘apapane and ‘i‘iwi occasionally dart through the preserve, though their populations are limited to its highest reaches. (Few honeycreepers survive below 4,500 feet, where avian- malaria-carrying mosquitoes live.) Bartlett says his crew has also heard endemic seabirds, ‘a‘o and ‘ua‘u, calling at night during their nesting season.

We follow the boardwalk’s steep steps into a ravine, where better drainage allows trees to grow to full size. Everything is still very wet; ferns, lichens and tiny native orchids sprout from moss-laden branches.

One of the photographers behind me stumbles; within seconds she’s clinging to some roots on a ledge with no visible bottom. We pull her back up onto our narrow track, no harm done. I’m reminded that as a lucky trespasser in this wilderness, I need to step carefully and stay present—a lesson I hope to take home.

By midday, the sky is a blank white sheet. Bartlett says there’s an 80 percent chance we’ll be walking out; the helicopter pilot may decide it’s too risky to fly. The slog down the mountain will take several hours, a possibility that turns the photographers green. We hunker down on the boardwalk and wait while Bartlett radios the pilot. Suddenly, out of the white, the helicopter appears. Within minutes we are transported back to modern life. Hidden in the clouds at the top of Mauna Kahalawai is a place where time marches to a different tempo and plants do reign.

Now whenever I glance at the summit, I wonder what those wise old plants are up to. I think of them looking down on us, laughing at our occasional missteps, which, hopefully, they will outlast.