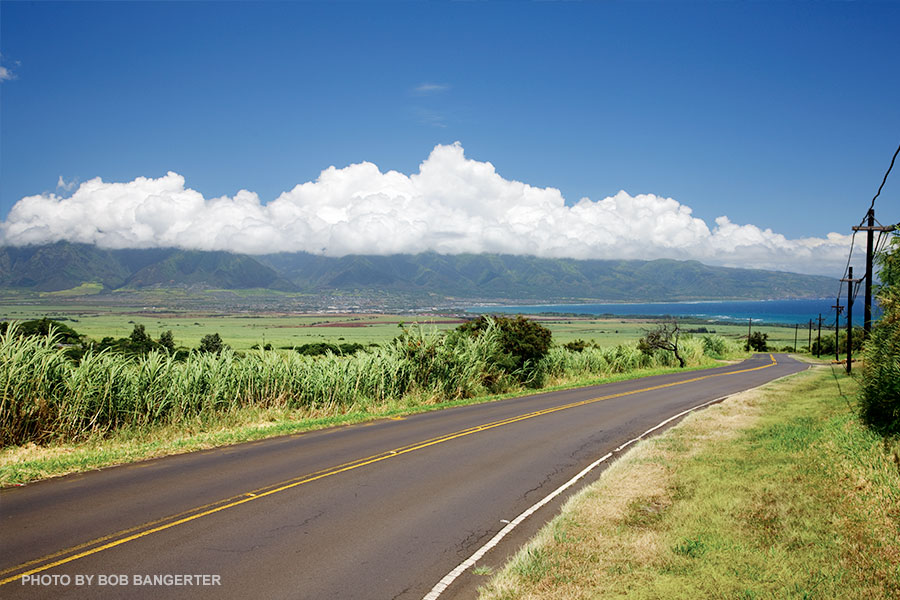 Running between the bohemian beach village of Pa‘ia and the paniolo (cowboy) town of Makawao, Baldwin Avenue is one of my favorite roadways. Whether cruising down the northwest slope of Haleakala with the Central Valley view filling the windshield, or easing my way up the gentle incline, I always roll down the windows to let the crisp upcountry breeze flow through the car as it winds along the lazy slalom. Named for Henry Perrine “H.P.” Baldwin, who cofounded local corporate giant Alexander & Baldwin in the 1860s, the scenic seven-mile route makes for a pleasant joyride in itself. But if you pull off the pavement here and there, as I did on a recent sunny afternoon, you’ll find the pleasures extend beyond the scenic to the spiritual, beginning with my first stop, just a few blocks up from the base of Baldwin Avenue, where it sprouts off of Hana Highway. 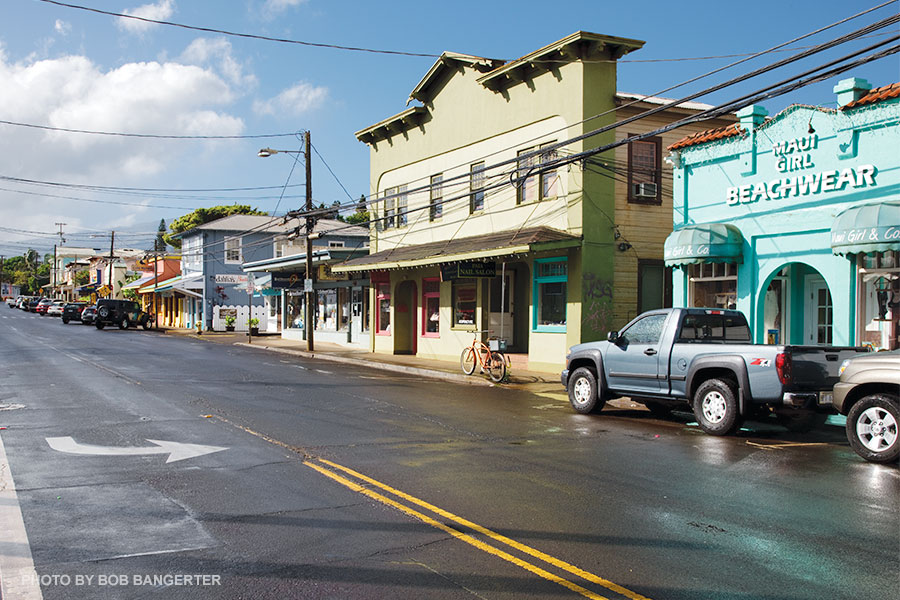 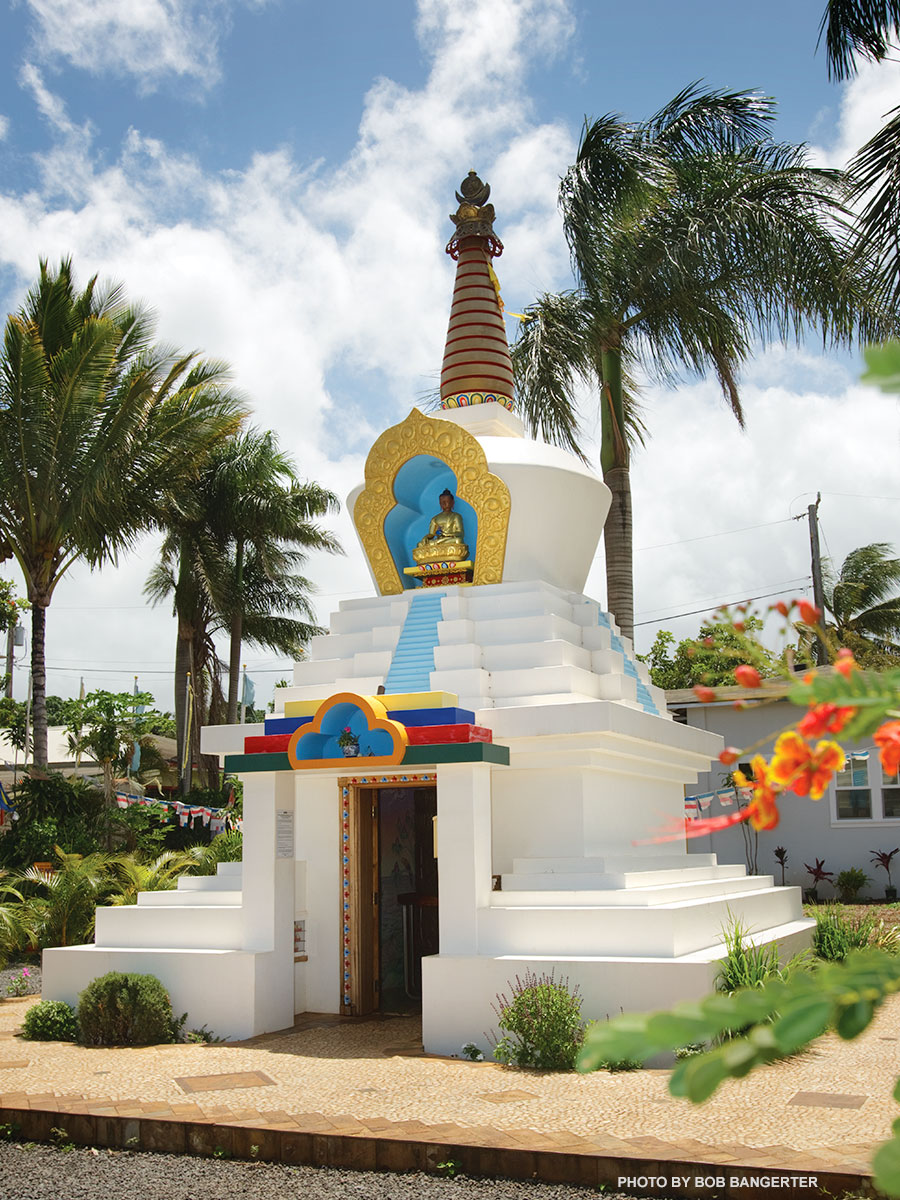 Tucked among old wooden homes and historic buildings stained russet by decades of cane-field dust, the Great Pa‘ia Lha Bab Peace Stupa, with its golden spire rising from its bright white dome, seems incongruous at first sight. Yet this quaint and quirky neighborhood is the perfect place for a sacred Buddhist monument to peace and love.

Just over a century ago, during its heyday as a bustling plantation town, Pa‘ia was home to many Japanese contract fieldworkers. In 1906, at their request, the village’s first Buddhist minister, the Reverend Sokyo Ueoka, arrived to build the Pa‘ia Mantokuji Mission. Sixty years later, immigrants continued to shape the town, but this time, they came from mainland America: hippies and flower children, blissfully pursuing enlightenment. By the 1980s, Pa‘ia had become firmly established as Maui’s New Age mecca.

So the Maui Dharma Center and its stupa are appropriately situated after all. Dedicated to the memory of the Venerable Lama Tenzin, the Dharma Center’s first full-time resident teacher, the stupa was consecrated by His Holiness the Fourteenth Dalai Lama himself in April 2007. Visitors are encouraged to use the large prayer wheel within the shrine, in the belief that, as the wheel turns, the millions of prayers contained inside are sent forth to bless the environment and all beings. The stupa and the center’s temple garden are open to the public 6:30 a.m. to 6:30 p.m. daily. (81 Baldwin Avenue • 579-8076 • mauidharmacenter.com)

Half a mile up the road from the stupa, remnants of an old sugar mill stand guard between upper Pa‘ia’s residential neighborhood and lower Pa‘ia town. Built by Hawaiian Commercial & Sugar Company (HC&S) in 1880, the Pa‘ia Sugar Mill was Maui’s oldest active sugar production facility until 2000, when foreign competition forced HC&S to downsize its operations. Across the road from the mill, the historic Pa‘ia train depot now houses the Maui Yoga Shala, One Love Farmers Market, and the vegan Aloha Cafe. (381 Baldwin Avenue)

Another mile and a couple of minutes later, I pull into the parking lot at Holy Rosary Catholic Church for a closer look at the marble statue of St. Damien, the Belgian priest who dedicated his life to the thousands of Hawaiians exiled to the Kalaupapa leprosy settlement on Moloka‘i in the 1800s. On the lawn fronting the church, the carved wooden stations of the cross stand neatly arranged amid blood-redti plants. The doors to the grand Gothic church are open every day, so one can properly behold the impressive stained-glass windows and majestic interior archways. (954 Baldwin Avenue • 579-9551) 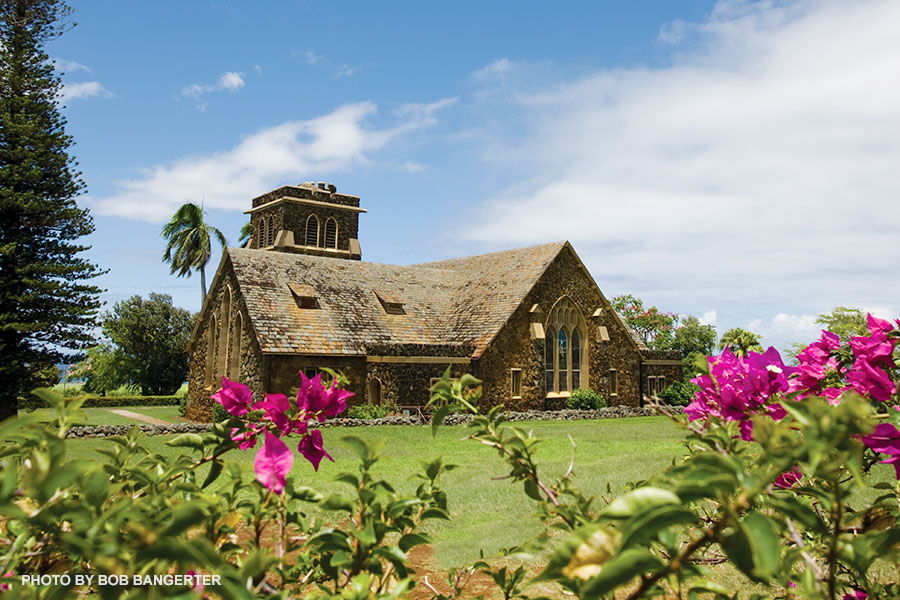 The next house of worship on Baldwin Avenue is Makawao Union Church, which is actually closer to Pa‘ia (2.7 miles) than the town it’s named for. The stone structure, built in 1916, is also called the Henry Perrine Baldwin Memorial Church and is listed as such on the National Register of Historic Places. Designed by C.W. Dickey, it is regarded as one of the finest examples of the famed architect’s work. The sanctuary’s amazing acoustics have made it a favorite venue for musicians and singers, from chamber music and opera to New Age and Hawaiian slack-key guitar. Unfortunately, on this Saturday afternoon, the doors are locked and so I can only admire the lava-rock walls and rectangular tower from the outside. (1445 Baldwin Avenue • 579-9261 • makawaounionchurch.org) 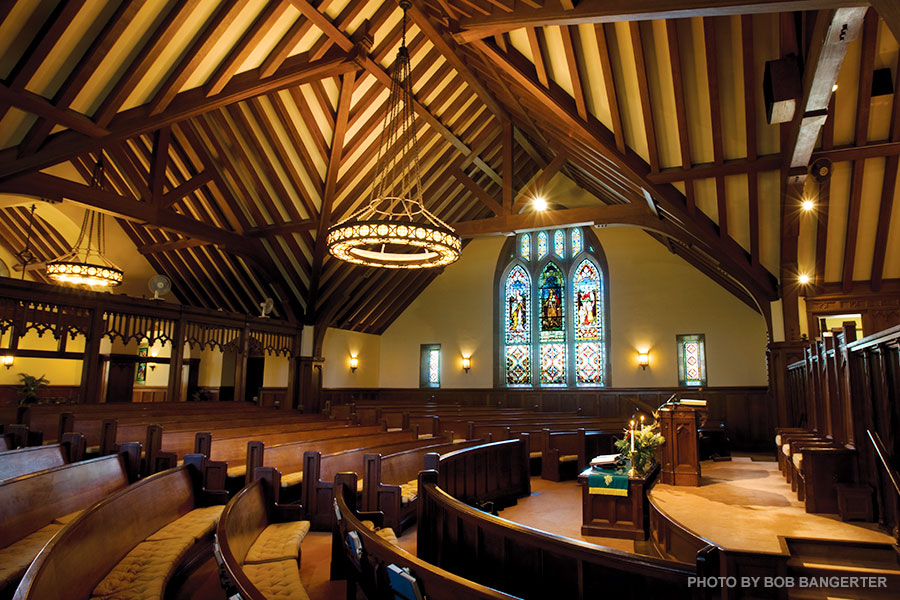 Back in the car, coasting through the long, lazy curve around Rainbow Gulch, I notice the roadside bougainvillea is in full magenta bloom. The few remaining cane fields seem to be waving goodbye, stalks fluttering in the trade winds. There’s a hint of coolness in the air, even at mid-afternoon, as we proceed upcountry, leaving behind the heat of the North Shore.

Three-and-a-half miles from the base of Baldwin Avenue, I turn left into Lumeria Maui, an eco-luxury retreat. The former Fred C. Baldwin Memorial Home — named for H.P.’s fifth son and built in 1910 as an institution for plantation retirees — has been painstakingly restored into what owner Xorin Balbes describes as a sanctuary in harmony with nature. Balbes’s extensive transformation of the six-acre property garnered a 2012 Preservation Award from the Historic Hawai‘i Foundation.

Although enrollment in one of the classes or activities is required for overnight guests, Lumeria welcomes day visitors, and serves breakfast, lunch and dinner (dinner by reservation only) at its farm-to-table restaurant, MuBu. I spend nearly an hour exploring the grounds, seduced into the hammocks in the Whispering Pine Forest, and then a fifteen-minute meditative stroll through the lava-rock labyrinth. (1813 Baldwin Avenue • 579-8877 • lumeriamaui.com) 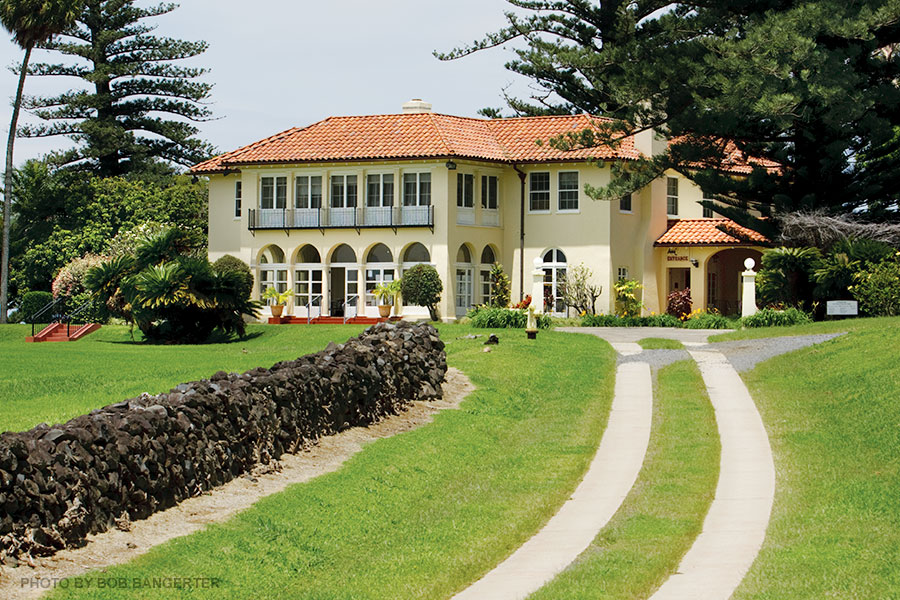 On the road again, I catch glimpses of Haleakala’s upper slopes and the Central Maui isthmus, the view changing with every curve of the winding course. Six miles above Pa‘ia, a stand of towering Cook pines marks the entrance to the Hui No‘eau Visual Arts Center at Kaluanui Estate. In Hawaiian, hui means partnership, club, or organization; no‘eau translates to clever or artistic. Another C.W. Dickey design, Kaluanui was the home of Harry and Ethel Baldwin, H.P.’s eldest son and daughter-in-law. Ethel founded the Hui in 1934, and the original mansion, stables, carriage house and garage have since been converted into galleries, artist studios and classrooms. Every couple of months, a new exhibit inhabits what was once Harry and Ethel’s living room; there’s also a gift shop with works by Maui artists, and a history room whose display, at least through the end of this year, tells the 125-year story of Haleakala Ranch. The Hui also offers guided walking tours of the estate, or you may browse on your own during Hui hours, 10 a.m. to 4 p.m. Monday through Saturday. (2841 Baldwin Avenue • 572-6560 • huihuinoeau.com)

The next mile and a half winds past a dozen or so stately manors, former homes of plantation managers and executives. Between the upscale residential neighborhood and the beginning of Makawao’s business district, the Maui Veterans Cemetery holds the remains of some 2,500 servicemen and servicewomen. A massive renovation and expansion began just after this past Memorial Day, but the graves and war monuments remain accessible, including the Kaoru Moto Memorial Pavilion, named for one of two Maui men posthumously awarded the Congressional Medal of Honor for their heroic actions on the battlegrounds of World War II as members of the all-nisei (second-generation Japanese-American) 100th Battalion. I remember walking to this cemetery as a child with several hundred schoolmates from Makawao Elementary, plumeria lei in hand, to pay our respect on the Friday before Memorial Day weekend. 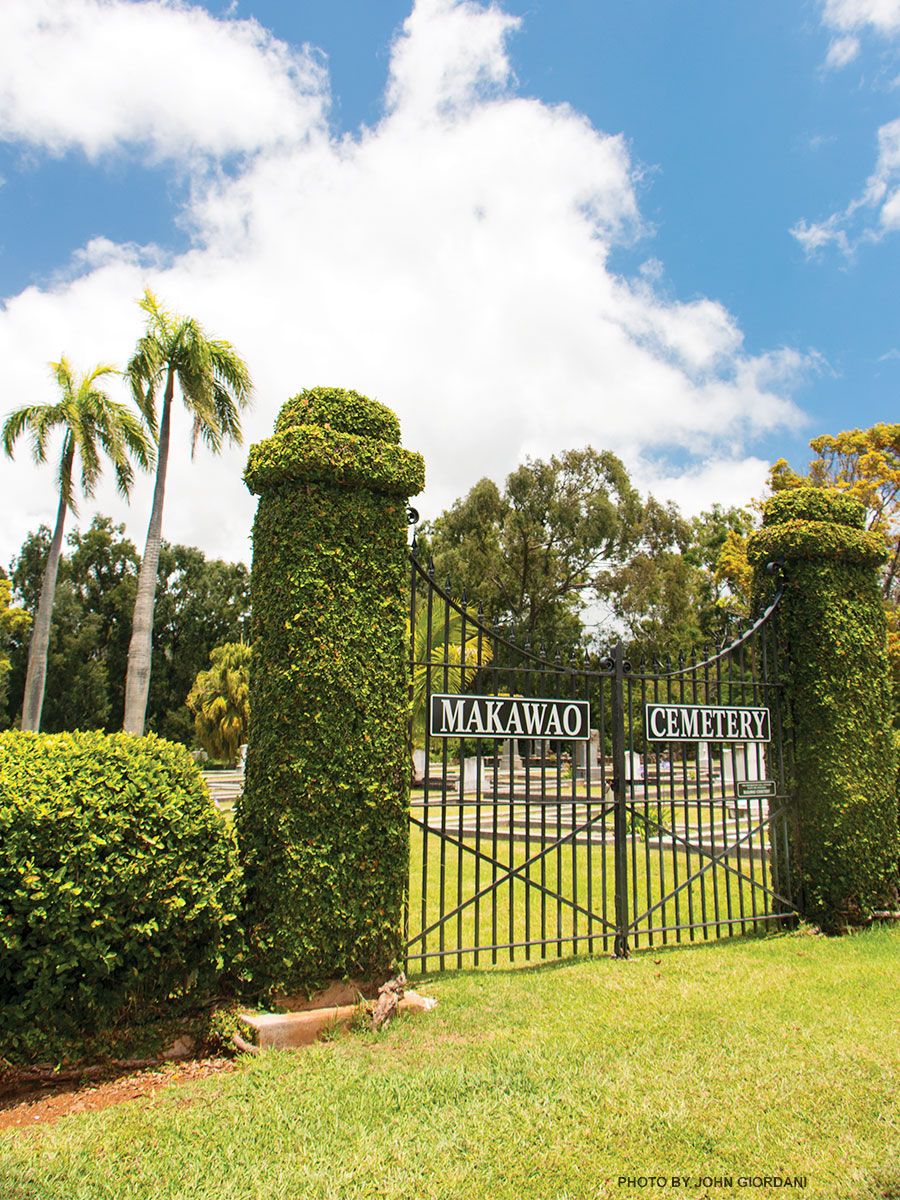 After reading the plaques memorializing each group of veterans, I walk to the adjacent Makawao Cemetery and find H.P.’s tombstone in the Baldwin family plot along with most of his immediate relatives. The Rev. Jonathan Green, founder of Makawao Union Church, is also laid to rest here. Gazing at his headstone, I experience an epiphany. Later research confirms my suspicion: this graveyard is the cemetery of Rev. Green’s original church, known as the Makawao Foreign Church, founded in 1861.  H.P. was a devout member of the congregation and even served as church organist. In 1888, he offered the church a new site, a prime piece of land on Baldwin Avenue, where the old Paliuli Sugar Mill had stood. And that’s why the stately stone sanctuary in the Pa‘ia District is called Makawao Union Church.

The last few blocks take me back to my childhood, as I drive past my grammar-school alma mater and try to recall the names of the old mom-and-pop shops that have been supplanted by an eclectic assortment of art galleries, restaurants and boutiques. One of them, Goodies, holds a special place in my heart; in a former life, the building was the tiny house in which my mother and her six older siblings were born and raised. Across the street, Viewpoints Gallery occupies what was once the Makawao Theatre, where Mom and her sisters would pay a nickel each to watch Saturday movie serials. Behind the gallery, you can watch glassblowers at work most days from around 10 a.m. to 4 p.m. at Hot Island Glass. (3620 Baldwin Avenue • 572-4527 • hotislandglass.com)

My road trip ends at the crossroads of Makawao town, where Baldwin Avenue becomes Olinda Road, intersected by Makawao Avenue. Had I not dallied for so long at Lumeria and the cemeteries, I might have reached Komoda Bakery before they sold out of creampuffs and Long Johns. A nonstop traverse of Baldwin Avenue, end to end, would have taken less than half an hour. Hmm. That means I have ample time to backtrack my route and return to Pa‘ia town before Ono Gelato closes for the day. 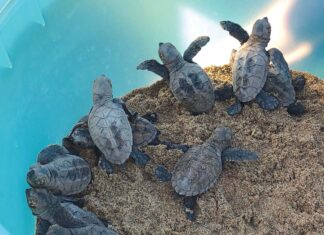 Mālama Maui for a memorable vacation.