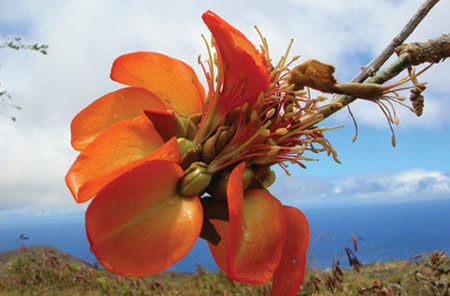 Most people expect the rain forests of Hawaii to dazzle, though few realize that its dry forests are equally spectacular. Chief among the archipelago’s dryland species is the wiliwili (Erythrina sandwicensis), known to ancient Hawaiians for its brilliant flowers, cherry-red seeds, and buoyant wood.

Wiliwili trees are deciduous—a rarity among Hawaiian plants. Unlike the deciduous trees of the northeastern United States, which go bare before winter’s killing frost, the wiliwili sheds its foliage for summer. Hibernating during the hottest months, its leaves vanish and its trunk shrinks. When winter rains return, the tree flushes with leaves. The trunk swells—stretch marks can be seen on its thin bark. The light, porous wood attracted Hawaiian woodworkers, who carved surfboards from larger trees.

Just six years ago, this charismatic species faced almost certain extinction. A tiny, unidentified gall wasp appeared on Maui—presumably having hitchhiked from Africa via Singapore. The insect laid its eggs in the living tissue of Erythrina species, forming galls and ultimately killing the trees. Within months, the alien wasp had wiped out Maui’s nonnative Erythrina trees and was hammering the native forest.

Miraculously, the Hawaii Department of Agriculture’s entomologists found a solution: a second wasp, discovered in Tanzania, which preys exclusively on the first. In our March 2009 story “Saving the Wiliwili,” MNKO covered the initial release of the predatory wasp. We’re delighted to report that the effort was a success; it effectively stopped the gall wasp’s invasion.

Take a drive along Piilani Highway to see wiliwili trees dropping seeds into the sun-baked lava, insuring new forests for the future.