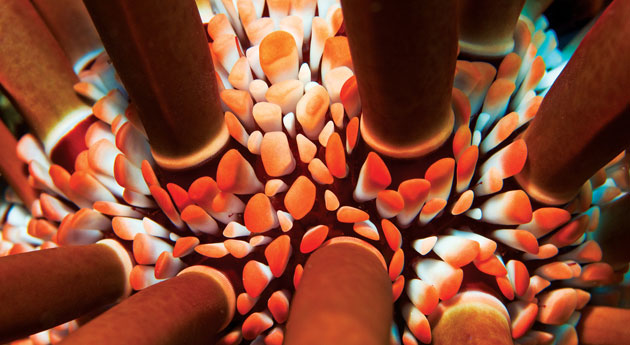 The first time I peered underwater, my known universe quadrupled. I must have been ten or eleven years old; my leaky mask tugged at my hair and promptly filled with water. Undeterred, I dipped my face under and discovered Oz—a Technicolor aquascape. Forget imaginary lions, tigers, and bears—here were real-life unicornfish, sea turtles, and eels! Who knew a wildlife safari awaited in knee-deep water? Grinning so hard the snorkel popped from my mouth, I surfaced to announce: “There are fish down there! Big ones!”

That same joyous discovery happens on Maui beaches every day. Despite relentless pressure from pollutants, invasive species, and commercial fishers, Hawaiian reefs are the gift that keeps on giving. Bristling with life, they offer up endless marvels for the curious. We have only to look to be amazed.

I’m in the “fish behavior” stage myself. Gawking at fish is one thing, understanding them quite another. Fish do strange things: clean each other’s teeth, change sex at will, and spontaneously shoot their stomachs from their bodies. How? Why?

I join Fielding and Foote for a guided snorkel at Kahekili Beach in Ka‘anapali, where soft sand gives way to a vibrant reef just a few feet from shore. Fielding’s snorkel tours begin with a shore-based biology lesson. Silver-haired and sun-tanned, she settles down into the sand and draws a piece of bleached coral from her bag. “Tiny coral polyps lived in each of these holes,” she says of the rings patterning the coral’s surface. “This is their skeleton.”

Corals may look like rock, but they’re actually colonies of animals—tiny, anemone-like creatures ensconced within stony calcium-carbonate cups that they secrete themselves. Colonies build slowly—only a few centimeters each year. The reefs surrounding Hawai‘i   represent thousands of years of growth.

Scientists agree with the ancient Hawaiians, whose creation chant, the Kumulipo, describes life initiating with a coral polyp. 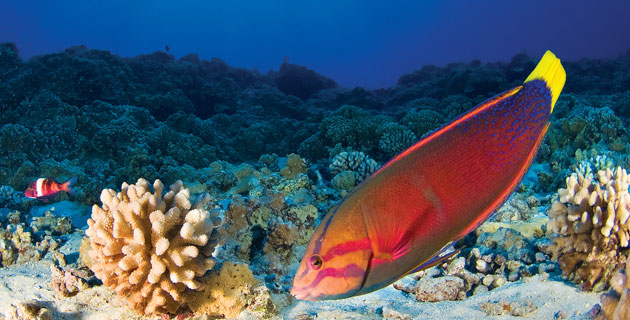 As the Hawaiian volcanoes formed and cooled, corals collected around them. Fish larvae and marine plants drifting by in the currents found suitable habitat in the new reefs. Over time, new species emerged, each uniquely adapted to this environment. Hawai‘i may not have the numbers and variety of fish found in Indonesia or Fiji, but those we do have are special. According to Fielding, around 25 percent are endemic to Hawai‘i—they evolved here and exist nowhere else on earth.

While endemic Hawaiian plants can be difficult to view—often requiring steep hikes into untrammeled wilderness—our fish are readily accessible. Recently designated as a Herbivore Fisheries Management Area, Kahekili is a perfect spot to get acquainted with the wonders down under. The herbivores—surgeonfish, parrotfish, and urchins—that are heavily hunted elsewhere are protected here. And where herbivores are plentiful, corals tend to be healthier.

“Herbivores take down the algae through grazing,” explains Foote. “Too much algae can outcompete coral, causing a loss of complexity and diversity on the reef—a slippery slope to slime, so to speak.”

Strapping on our masks, we explore the reef. Foote points out a school of fifty-odd convict tang. In their jailhouse stripes, they descend on each coral head in turn, grazing like sheep. It’s a good sign, says Foote, an indicator of a healthy ecosystem. I spot a saddle wrasse—my first endemic—darting above cauliflower coral.

A rainbow-hued male uhu (parrotfish) noisily scrapes its parrotlike beak against some dead coral, snacking on algae. His blotchy, reddish-brown mate paddles close by—likely one of several in his harem. But there’s no need to protest parrotfish inequality; when a harem grows too large, the strongest female switches genders and takes half the ladies away to form her own dynasty.
At a busy intersection, two cleaner wrasses have set up shop. Sporting electric yellow and purple streaks, these wee punk rockers are the stylists of the sea. Their clients swim up and hover in place while the wrasses tidy them up, removing parasites while getting a free meal in the process.

A spatter of rice coral on the seafloor glints in the filtered sunlight. A spotted moray eel darts mechanically in and out of its shelter, opening its narrow jaw to reveal a pure white throat ringed with sharp teeth. What looks like a wilted rosebud waving gently from the rock face above is really a clutch of Spanish dancer eggs, its magenta petals as flamboyant as the nudibranch that laid them.

Collector urchins can’t run, so they hide, covering themselves with pebbles and broken bits of coral, using the tube feet along their bodies to move the camouflage to their tops, bucket-brigade style. It only partially discourages the forceps fish, whose snout is designed for nibbling on urchin tube feet. Hawaiians called forceps fish lauwiliwili nukunuku ‘oi‘oi, or “sharp-beaked wiliwili leaf,” referring to the similarly shaped leaves of the wiliwili tree.

A pair of yellow tangs swims past, brandishing the white “scalpels” at the base of their tails—small spines that they can whip out and retract like switchblades. Once abundant, these bright canaries of the reef have almost disappeared, whisked away by opportunistic collectors to perish in pet shops and aquariums.

Thanks to my expert guides, I observed more fish behavior in two hours than in twenty years of snorkeling alone. As we head back to shore, we encounter two human legs planted awkwardly on the reef, their owner oblivious to the ancient creatures he’s crushing. “Sir, you’re standing on live coral,” says Foote. “You’re killing it.” “Oh,” he says somewhat skeptically. “I didn’t know.”

It occurs to me that there’s a stage beyond marine photography for us aquaphiles: stewardship. We humans tend to treat the ocean like a bottomless dumpster, expecting it to swallow our plastic bottles, soapsuds, spent batteries and oil slicks. Paradoxically we also demand it supply us with our daily vitamins—our six-ounce filets and fish-oil pills. But once we’re acquainted with individual marine species and their habits, it’s harder to dismiss their plight.

As we explore the sea’s mythic depths, our terrestrial superiority shrinks. Our imaginations grow. Humbled and delighted, we realize we do not know it all. We’re guests, not masters of this realm. That reality check is one of the ocean’s many gifts to us.

+ Dispose of plastic properly; fish mistake floating debris for food.
+ Avoid purchasing souvenirs made from coral.
+ Participate in beach and reef cleanups.
+ Learn how to submit REEF surveys.
+ Sign up for the Great Annual Fish Count.