It’s early morning at the University of Hawai‘i Maui College as we stand in the loading dock outside the Pa‘ina building. Duane Lammers, manager of Hāna Ranch, addresses our group. “A luxury helicopter tour company was arriving with visitors who would be staying at the Hāna Ranch guest house,” he recounts. “We went into the house make sure it was ready and found a herd of goats!” We laugh as he explains that a gate was accidentally left open, providing access for the ruminants.

“Every employee came to help remove the goats and clean the place up,” adds his wife, Rose. “We were lucky they hadn’t started to eat the furniture!”

“So, no more goats for us,” concludes Lammers. “Now we’re concentrating on growing and processing ‘ulu. It’s not as exciting, but it’s much easier to manage!”

The laughter subsides as my husband, Chris Speere, Maui Food Innovation Center site coordinator, steps forward. “There is a lot of potential to build on this collaboration between the MFIC and Hāna Ranch,” he says. “Engaging these culinary students with hands-on experiences can open their minds to creating a specialty market of products [from seed to shelf]. I can also see future partnerships with other leading Maui growers of coffee, olives, kalo [taro] and cacao. This is an exciting time.”

One of 24 canoe plants brought to the Islands by early settlers, ‘ulu is a staple of the Hawaiian diet. It is naturally low in fat, low glycemic, non-GMO and gluten-free — a great alternative for those with allergies and sensitivities.

This has indeed been a win-win for UHMC culinary students and Hāna Ranch, and the ‘ulu stars serendipitously aligned with the arrival of Covid-19 in Hawai‘i in spring of 2020: The students were learning via virtual classroom, so the campus kitchens were empty and unused, and Lammers had decided to process his harvested ‘ulu on-island, so he was in need of resources to make it happen. Speere coordinated a partnership between the students (who needed hours to fulfill their program requirements), Hāna Ranch (which needed warm bodies) and UHMC chancellor Lui Hokoana (who helped secure funding) to make it all happen.

Around 8:30 a.m., brothers Lester and Trinity Kaiwi, part of the vegetation-management team at Hāna Ranch, pull their truck up to the loading dock. Three heavy-duty storage containers rest in the truck bed, and hold approximately one ton of harvested ‘ulu. This is the second such shipment the Kaiwis have hauled the 50-plus miles along the narrow north-shore coastline that winds from Hāna to Kahului — a nail-biting trip on a good day.

“What time did you get up this morning?” I ask Lester.

“We were up at 4 a.m. getting the ‘ulu shipment ready,” he says. “Fortunately, no one [else] was on the road this early.”

Though the 3,600-acre Hāna Ranch is largely known for its grass-fed beef, several acres are set aside for orchard cultivation. In 2014, the Kaiwis planted 1,000 cloned seedlings from the Breadfruit Institute in Hāna’s National Tropical Botanical Garden, part of a program to revitalize ‘ulu in Hawai‘i. “[They’re] like our keiki [children],” the Kaiwis say of the ‘ulu trees.

Unfortunately, the Hāna Ranch cattle didn’t get the memo that these orchards were not for their benefit: They quickly decided that ‘ulu was their new favorite delicacy — and devoured about 75 percent of the newly planted trees. “We were told that cows don’t like ‘ulu, but they were wrong!” laugh the Kaiwis.

Fortunately, the remaining 100 or so trees proved to be very prolific, which is evident when the Kaiwis open the containers to reveal mounds of round, ripe breadfruit.

The students unload the truck by hand, placing the fruit onto carts in a single layer and roll them into the building. Several students man each workstation, where they wash and clean the bowling-ball size breadfruit, then weigh it and sort it onto different carts. “We sort the ‘ulu by ripeness for savory and sweet applications, like for hummus or for pies,” explains Gary Johnson, consulting chef at Hāna Ranch.

Once they transfer all the ‘ulu into the kitchen, students then carry out several bulging bags of cooked, refrigerated ‘ulu skins — trimmed from last week’s crop — and load them onto the truck. “Oh, the pigs [in Hāna] going to get fat now!” calls Lester Kaiwi from behind the wheel as they depart.

The washing and weigh-in process takes hours, and when they finally remove their prune-like hands from the water we learn that the weight of the day’s haul totals 1,919 pounds. This is the second harvest of the year so far; the week prior yielded 1,621 pounds.

“Since 2016, Hāna Ranch has shipped all of its ‘ulu to the Big Island ‘Ulu Cooperative, but with the [38 percent] increase in shipping costs and about 20 percent spoilage in route, we decided to process [some of it] here on Maui,” says Johnson. “We are still shipping half of our ‘ulu to the Big Island, though. There just isn’t enough grown [there] for their needs.” Hāna Ranch plans to sell the remaining ‘ulu to local hotels and restaurants.

Back in the kitchen, the students cook the fruit in a variety of commercial appliances — one combi-oven, a steamer-kettle cooker, two tilt-skillets and a deck oven with steam. Once it reaches an internal temperature of 135 F, the ‘ulu is removed, cooled a little, then cut in half. The students then pare off the bumpy skins, remove the cores and save the trimmings to be upcycled into feed for the happy Hāna pigs to enjoy the following week. 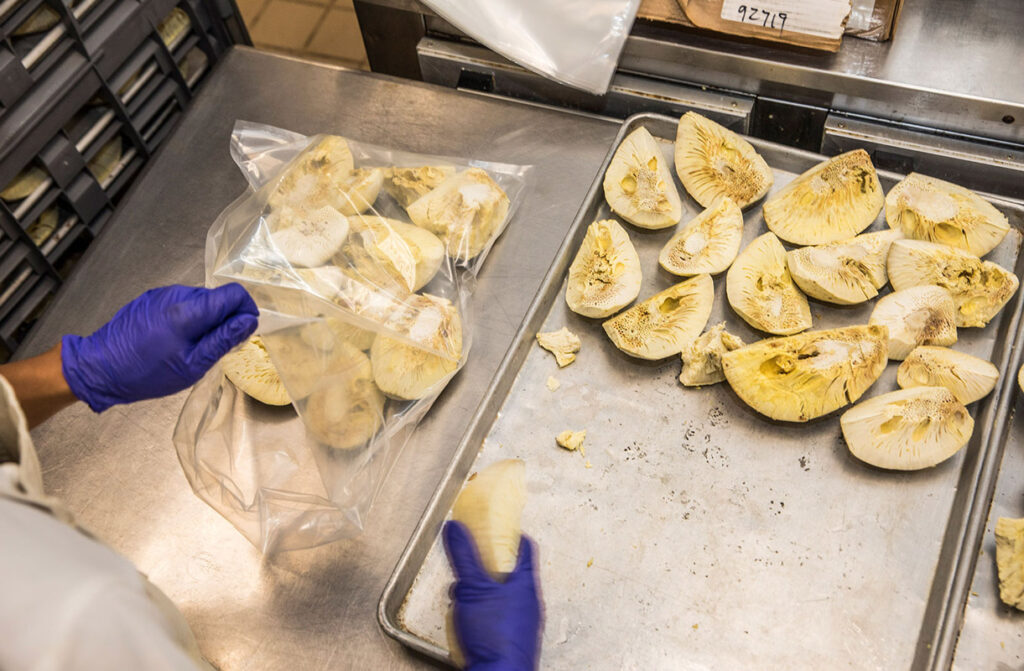 “[The ‘ulu] is next cut into wedges and cooled to 70 degrees within two hours, according to the Hawai‘i State Department of Health guidelines,” explains Johnson. “The wedges are frozen and shrink-wrapped and finally packaged into 50-pound boxes for wholesale delivery.”

The students seal and package the last of the fruit, then they stretch and smile. It has been an eight-hour workday, beginning early that morning with a total kitchen sanitization and ending with the rolling of the final cart of ‘ulu into the freezer.

“These helping hands have been great!” says Johnson about the UH students. “We have a process in place and we’ll only get faster.”

Two months later, seven loads of ‘ulu have been processed for a grand total of 11,113 pounds (about 5 1/2 tons). On this final day, I survey the room and see happy, glowing faces, a testament to the success of the ‘ulu project. But still, I sense a modicum of sadness with the end of this fulfilling experience.

“We appreciate your time and professional work ethic and look forward to a continued relationship with the college,” says Lammers to the group, adding that the ranch plans to install pig- and cow-resistant fencing to protect future plantings. “It looks like we will have another flush of breadfruit starting in February, so I hope we can count on you to help again.” Smile abound and students depart, vocalizing their future commitment to the project with enthusiasm.

The value of collaborating for a sustainable food future can’t be measured, but one thing is for sure: If we care for the land and grow food for everyone, we will enrich the lives of all and will give truth to the phrase, “Lucky we live in Hawai‘i.”

‘Ulu is extremely versatile and can be made into all manner of dishes, including hummus, chips, ice cream, pie, soup, salads, stew, casseroles, lasagna, burgers, pickles, gnocchi, bread and even chocolate mousse!