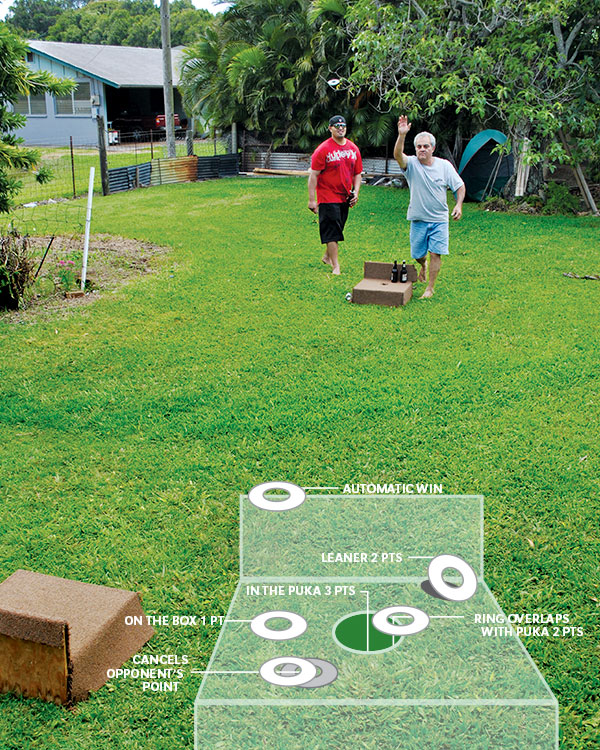 You may see it at the beach or a friend’s backyard: two players take turns tossing large metal washers at a pair of wooden boxes. The game is Portuguese Horseshoes. My late grandfather Joao Pereira de Freitas was a Makawao blacksmith, so I am uniquely qualified to attest that Portuguese Horseshoes is neither Portuguese, nor does it involve horseshoes.

While variations of the game are played elsewhere as “washer toss,” veteran Honolulu competitor Daniel Ikaika Ito says that here in the Islands it was devised to circumvent public-park regulations that forbid driving stakes into the ground for traditional horseshoes games. Island ingenuity swapped stakes for wooden boxes with backstops and a hole on top, and horseshoes for metal washers. Nobody knows who played the first game, or where or when, but like humongous coolers, rice cookers and blue tarps, Portuguese Horseshoes are mandatory gear for local parties these days. Ito describes it as “a blue-collar, beer-drinking, pau hana [after work] game that is fun for all ages.”

The rules are simple — and may vary depending on who’s playing. If a washer makes it onto a box top, the team scores one point, two points if the washer ends up hovering over the puka (hole), and three points for a hole-in-one. If a player’s washer lands on top of their opponent’s hole-in-one, the tosser collects those points. The first team to amass twenty-one points wins. If you can get a washer to land on and stay atop the backstop, you automatically win. “I’ve been playing the game for fifteen years and I’ve only seen this happen twice,” says Ito.

But why is it Portuguese (or “Podagee” in local vernacular)? “The same reason a dollop of mayonnaise in a chili-and-rice bowl is called ‘Podagee mac salad,’” Ito says with a shrug.

I’m not sure I’d call this an explanation, but that’s okay. We local people love Portuguese sausage, sweet bread, and bean soup. Now we can add horseshoes.