In the photo, a tiger shark’s fin cuts through the water’s undulating fabric, sending tiny ripples across the fishpond. You can almost smell the brackish water, feel the weight of the air, and hear the graceful predator, mano niuhi, slip beneath the surface. It’s an intimate portrait—more artful and reverent than you might expect from a scientific slide.

Then again, Dr. Pualani Kanahele isn’t your typical scientist. The renowned Native Hawaiian kumu hula (hula teacher) heads a research and curriculum-development project called Papaku Makawalu. She and her colleagues have taken thousands of photos documenting natural phenomena, some of which they shared last August at the Hawai‘i Conservation Conference in Honolulu. Their images differ dramatically from standard data collection. Stimulating the senses, they suggest context and relationship. They evoke their subject’s mana (spiritual power). Rooted in ancient Hawaiian thought, Papaku Makawalu represents a new—or, rather, very old—approach to science.

As Western-trained conservationists battle extinctions, invasive species, and habitat loss in Hawai‘i, many are turning to indigenous wisdom for guidance. Projects like Kanahele’s provide a philosophical framework for those working in the field.

Kanahele and her team draw on a rich legacy: their ancestors’ lifetimes of observation. Over the course of a thousand years, Hawaiians developed an acute understanding of their universe. Out of this intimate awareness grew ways of living in balance with the natural world. Like all human populations, the Hawaiians left footprints, some indelible. But remarkably, ancient Hawai‘i supported a population on these islands as large as today’s—without the help of barges and planes. How?

Ancient Hawai‘i supported a population on these islands as large as today’s—without the help of barges and planes. How?

The researchers’ primary source is the Kumulipo, a pre-Contact magnum opus known as the Hawaiian creation chant. In 2,000 verses, the Kumulipo describes the evolution of life from primordial darkness: the emergence of sea creatures, plants, birds, animals, and finally humans. It’s a condensed form of information, says Kanahele, a sort of scientific shorthand, riddled with clues related to biology, geology, math and astronomy.

Papaku Makawalu seeks to unravel this complex code, both through scholarship and field research. Its multitude of photos serves as a way of reframing the modern Hawaiian view of the environment.

“We’re not just looking to learn how our ancestors thought,” says Kanahele, “but how we can apply it today.” To this end, the Papaku Makawalu researchers host free teacher workshops and distribute curriculum materials to share what they discover.

Dr. Kanahele was among several indigenous leaders invited to speak at the Hawai‘i Conservation Conference. The conference theme, “Applying Traditional and Western Knowledge Systems,” acknowledged the elephant in the room: that native Hawaiian ecosystems are managed mostly by outsiders. Presenters addressed the disparity between Hawaiian and Western approaches to natural-resource management.

For starters, Hawaiians consider the term “resource management” a misnomer. The land and its inhabitants aren’t commodities to be managed.

“Man does not have dominion over nature,” says Hawaiian lunar-calendar expert Kalei Nu‘uhiwa, who investigates atmospheric conditions for Papaku Makawalu. “Traditional Hawaiians are descended from our environment. The forests, oceans, lands, organisms are all our ancestors and gods. We are their family members.”

While Western eyes might see the tiger shark as a mere animal, perhaps a fearsome one, Hawaiians see mano niuhi as ‘ohana (family). Modern ecology recognizes biological connections, but stops short of acknowledging spiritual connections. Operating from a standpoint of objectivity, Western science disregards spirituality and tends to separate humans from “nature.” To Hawaiians, it’s all part of the same fabric; they don’t see a separation.

Unfortunately, many of us do feel foreign to our environment. We’ve lost our intimacy with the natural world, and with it, critical information. According to Nu‘uhiwa, even six-year-olds of the past could name the thirty phases of the moon and how each related to fishing, planting, and harvesting. Can you answer what phase the moon is in right now? A Hawaiian would say, put down this paper. Let’s go outside and look. Hawaiian knowledge is experiential. Rather than a collection of facts, it’s the fostering of natural, inherent relationships.

The moon tugs at the water in our bodies, fields, and oceans, affecting us inside and out. The Hawaiians knew that, and how to respond for the best results. Farmers avoided planting kalo during hilo, the new moon, which would produce skinny corms. Instead, they favored the fat, round harvests of mehealani, the full moon. Healers prepared medicines just after mehealani, when the moon’s pull had drawn water up from the earth into the plants, promising the most potent sap. Fishermen avoided snaring male uhu (parrotfish) during spawning to avoid depleting future populations. Far from superstitious, such practices were based on repeated results. On these isolated islands, you either adapted to the patterns of nature, or you didn’t survive.

Ancient Hawaiian philosophy is more than a farmer’s almanac; it’s a novel and highly sophisticated paradigm for perceiving the world.

Ancient Hawaiian philosophy is more than a farmer’s almanac; it’s a novel and highly sophisticated paradigm for perceiving the world. Hawaiians recognized obvious and underlying patterns in nature. Papaku, for example, refers to a foundation: the earth, ocean’s floor, or streambed. It’s the stabilizing force from which things emerge. Makawalu is the expansion, the opening movement. It’s the flower that unfurls from the tight bud, the lava flow that forms new land. Balance is found in the interplay of the two forces: pono.

The word pono fills half a page in the Hawaiian dictionary. Invoked in our state motto, “Ua mau ke ea o ka ‘aina i ka pono” (The life of the land is perpetuated in righteousness), it can mean goodness, uprightness, correct or proper procedure, excellence, prosperity, or equity. The active tense of the word, ho‘oponopono, refers to righting a wrong.

Just how does this heady philosophy translate to boots on the ground? Many Hawaiians currently working in conservation may not be familiar with the more esoteric facets of their ancestors’ philosophy, but they embody what they do know.

Kahale‘ala Pali supervises the Army’s conservation efforts on O‘ahu. The thirty-eight-year-old Waiahole native says filial responsibility influences his work. “I’m not going out to save an endangered plant,” he says. “I’m going to help my elder sibling . . . to nurture, protect, get it strong again—exactly as if it’s a terminally ill family member.”

Pali first learned about plants from his aunt, a healer skilled in the arts of lomilomi (massage) and la‘au lapa‘au (medicinal plants). “Ethno-botany was my passion,” he says, “but I discovered that a lot of Hawaiian plants are on the endangered list, so I saw a more urgent need to work in natural-resource management.”

When he embarked on his career, an elder warned him that if he disregarded the spiritual aspect of his work, he would fail. He came to agree.

“I’ve observed people who go out with just Western knowledge—what the book says. But who wrote the book? A man who can make mistakes,” says Pali. “They’re not looking at the big picture. They just zoom in at a tiny part and miss seeing lots of little things that affect it.

“I’m trained academically as a biologist, but I also have the values I’ve learned from kupuna [elders] and family,” says Pali. “I try to be sensitive to cultural things when I’m working. I stand in the forest and try to get a feel for what is appropriate. It’s what my na‘au [gut] is telling me to do. You could call it prayer, meditation, or introspection, but it comes from a different source than logic or reasoning. You just have to feel pono.”

Lori Buchanan of the Moloka‘i–Maui Invasive Species Committee says she tunes in to intuition while surveying for invasive plants. “I’ll be walking through the bushes looking for rubber vine, and I’ll just stop and know it’s there. Boom. There it is, hiding behind the tree. It’s not so much ESP as a vibe the plant gives off that I can sense.

Before Buchanan began work eradicating a grove of invasive albizia trees, she contacted Hawaiians with genealogical ties to the area. A kupuna agreed to assist with the project, showing work crews how to respect nearby archeological sites and asking ancestral spirits for their blessing. She also addressed the trees, thanking them for shade and oxygen, but telling them it was time to go.The job was a resounding success: 800 massive trees were felled without incident. Perhaps more significantly, the project created a sense of shared kuleana (responsibility) within the community. Such personal accountability will help prevent the spread of invasive species in the future. Since human behavior is at the root of most ecosystem imbalances, changing people’s relationship to their environment is part of the solution.

Subsistence fishermen on Moloka‘i discovered this when they began educating their neighbors in the old ways. To prevent overfishing at Mo‘omomi Bay, Hui Malama Mo‘omomi encourages locals to take only what they can eat fresh and avoid fishing during spawning events. The Hui publishes a lunar calendar noting when certain species spawn, where they gather, how to tell males from females, and which fishing methods are least harmful. Thanks to these efforts, Mo‘omomi Bay’s fishery is healthier than others around the state.

“A huge error in perception is that you need to separate things into a box,” says Pali. “Western science and Hawaiian knowledge, the spiritual and the physical . . . these coexist in my world. I don’t see a box.”

Like the tiger shark, we humans make ripples as we move through our environment. Our actions affect our surroundings, for better or worse. Embracing a Hawaiian perspective can help us see the connections and repair them. Now go outside; the moon is waiting. 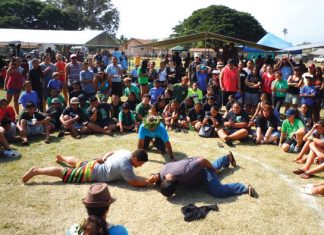 Children of Hawaii play traditional island games in the spirit of Makahiki. Ancient cultural competitions in connection with the festival and its meaning.