It’s not a new concept. Good farmers and gardeners have always tuned in to changes in weather, soil, moisture, presence of critters large and small, and a myriad of other variables that might affect crop yield or floral blooms. Farmers’ almanacs have long promoted planting during the full moon. So why learn thirty different phases, further complicated by permutations based on season, place and objective?

“Because it works,” says Kalani Pe‘a, a Hawaiian resource coordinator with Kamehameha Schools who also develops project-based learning curriculum for Waihe‘e School. He cites sources both young and old to support the practice. Pe‘a tells his students about watching his grandfather successfully grow kalo (taro) in tires on pahoehoe rock on the Big Island by following the moon calendar. And then he challenges them to develop and test hypotheses to answer the question: Is the Hawaiian moon calendar planting and fishing guideline true or false? Pe‘a says, “I don’t like to test our kupuna [elders], but I had to find something developmentally and culturally appropriate for my fifth graders.”

His students worked in teams, planting lettuce on both hoku (the third and fullest of the four full-moon phases) and ‘olekukahi days, controlling for the number of seeds, soil, water, and sunlight. The result? “Our kupuna were pololei [correct],” Pe‘a says. Lettuce grew immensely in the hoku pots. In some of the ‘ole plantings, no lettuce grew; in others, the plants grew but died sooner and were less vigorous. “Even some of the teachers were surprised,” he says.

Nu‘uhiwa and Pe‘a talk about the moon’s gravity pulling water to the surface during certain phases to explain increased productivity. “She and the Earth have a connection,” says Pe‘a. But some scientists question the link. “Generally, the moon’s tidal effects can only connect to very large scales on the Earth, like whole oceans,” says University of Colorado astrophysicist Ben Brown, whose work intersects with planned projects at Haleakala’s new telescope. “Small-scale things like local aquifers and the sap in plants can’t be affected by the moon’s gravity.” But it may be they’re not looking in the right place or at a small enough scale.

A 2012 paper by P.W. Barlow and J. Fisahn in the Annals of Botany reanalyzed data from different plant studies, some as old as the 1920s, where the exact time and location of the data collections were known. They looked at whether changes observed in plants’ leaf movement, root growth, stem diameter and water content correlated to changes in the combined gravitational force exerted by the moon and sun at a particular time and place. In each case, they found strong correlations. While noting that science has yet to fully explain the mechanism by which these patterns occur, they posit that some regions of plant cells may give up or accept water more readily under the influence of lunisolar gravity. “The Moon and its motion around the Earth, in conjunction with the Earth’s motion around the Sun,” they concluded, might be “an integral part of the biological system,” expressed as a biological rhythm.

Western science and indigenous practice aren’t mutually exclusive, according to Nu‘uhiwa, who describes kaulana mahina as a traditional science using observation, hypothesis, and trial and error. Other studies are helping corroborate what Hawaiians have known for generations. She says a project in New Zealand is pairing native students with elder practitioners to look for biological explanations for why the system works. A Pacific-wide conference in fall 2015 will explore using place-based calendars to foster sustainable practices.

For Pe‘a, it’s more than just study and inquiry. He says, “It’s our life. We must do what our kūpuna have instilled in us.”

Can the Hawaiian moon calendar help all of us live more sustainably — wherever we are — while deepening a sense of place? Whether we name the moon in English or Hawaiian, plant by her light to grow prize-winning pumpkins, or doubt such connections exist, it appears we might not be able to escape her influence. Might as well learn to count the nights. 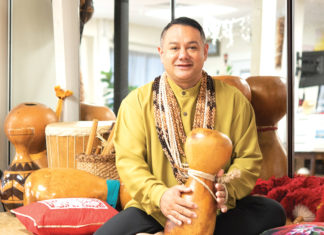 Triple threat: He can dance. He can chant. And he can sing.