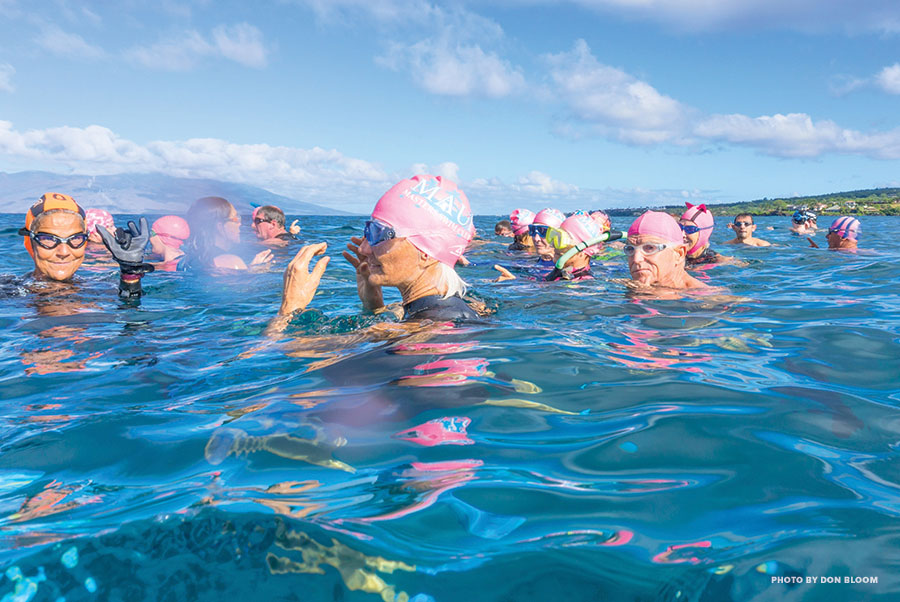 “A lot of people think it’s for breast cancer,” says Christine. “We just go, ‘Sure.’”

“The suits transpired from a TED Talk that showed bright colors shaped like a sea snake—pink and black and striped like a zebra—flash a signal to other marine life that it’s dangerous; don’t go near it,” adds veteran Maui lifeguard and Pink Cap stalwart Rich Landry. “That’s why we’re all wearing pink and black, or anything with stripes.”

The Pink Caps are in no way an official organization. There’s no membership list, no application, no dues, waivers, nothing to sign. It’s all word of mouth, the undersea cable in Maui’s coconut wireless.

Regulars these days number between twenty and thirty on any given Sunday. They include island lifeguards and coaches on their days off, and former age-group and college swimming champions. But there are also people who came to Masters Swimming in adulthood, as a form of recreation. They’re a healthy bunch, especially considering that many have their AARP cards next to their U.S. Masters Swimming IDs in their wallets.

They also turn out to be a tight-knit community of awfully happy people, thanks to all the endorphins—the feel-good chemicals that exercise releases in the brain.

The Pink Caps call them “endolphins.”

“The Pink Caps are very social,” says Janet Mercer, who, with partner Patti Hawkins, has been swimming with the group for almost twenty years. “We find the wild water and we swim in it. We do a triathlon every Sunday: we swim, we eat, we nap.”