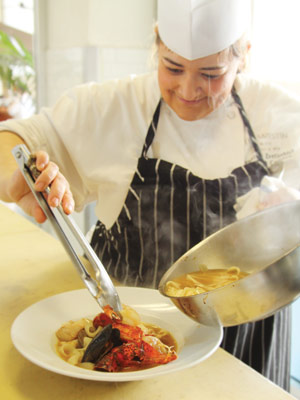 When you imagine a bowl of pho, what comes to mind? A candlelit table beside the moonlit surf? Silver spoons dipping into bone-china bowls? Starch-shirted waiters presenting a selection of shellfish and lobster tails bathed in an aromatic broth?

Not exactly what you envisioned?

If you’ve always thought of pho as an inexpensive curative obtained at a carry-out window, picture instead indulging your craving for the nutritious broth at a restaurant where the ambiance and service soothe your soul as much as the dish itself does.

Since taking charge of the kitchen in 2012, Chef has been adding her signature to Tropica’s menu by using more Pacific Rim techniques and favorite local flavors. Adding seafood pho to the upmarket venue is among the most notable enhancements so far. I asked Chef Jen what prompted her to make the change.

“I wanted to infuse the bouillabaisse formerly featured at Tropica with a stronger sense of Hawai‘i. The shellfish was a great fit but the broth was more French than Polynesian. Since pho is the comfort food I turn to whenever I feel under the weather, I decided to reinvent the bouillabaisse recipe as a gourmet version of restorative pho.”

Unlike your favorite roadside version, where you’re expected to add bean sprouts, fresh basil, chili sauce and lemon juice to the broth to suit your sniffles, Chef Jen infuses her seafood pho with lemongrass, galangal (a version of fresh ginger) and lime while it simmers, so there’s no need to mix in the flavorings and ingredients later.

Like most other notable Maui chefs, Evetushick is passionate about sourcing local foods and partnering with island farmers to incorporate flavors from freshly harvested vegetables and herbs. Maui’s climate is ideal for growing pho ingredients — basil, lemongrass and ginger — in your garden. Or visit your favorite farmer’s market or grocery.

As important as fresh herbs to this dish is the seasoned broth. You could use shortcuts to create a soup base (if you don’t have lobster heads lying around, for instance), but then you’d miss out on the depth of flavor, heady aroma, and satisfaction that comes with the first inhalation of this red-curry broth.

Although it’s not mentioned in the recipe, Chef also graces her seafood pho with a few dollops of bright green pesto, made from a pureed mixture of equal parts green onion and fresh ginger. Stir a spoonful of pesto into the seafood and lemongrass-scented soup and say “Ahhhhh.”