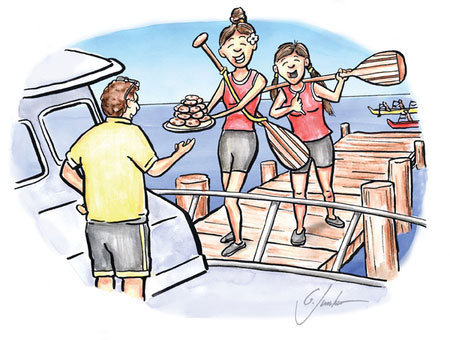 I used to firmly believe that if you want something done right, you have to do it yourself. That was before I started paddling. See, when it comes to powering an outrigger canoe, it’s all about a cooperative effort. If the timing or the blend between the paddlers is off, the entire boat slows down. I learned very quickly that you can’t pull a 400-pound boat by yourself, at least not if you want to get anywhere.

So it is that paddling is an analogy for life. Consider the Hawaiian proverb E lauhoe mai na wa‘a; i ke ka, i ka hoe; i ka hoe, i ke ka; pae aku i ka ‘aina: Everybody paddle the canoes together; bail and  paddle, paddle and bail, and the shore is reached.

Most recently, paddling showed me how this concept applies not only in the canoe, but out of it. Here is the scenario: ten female paddlers from O‘ahu, their coach and his wife are trying to get to Moloka‘i to race in Na Wahine O Ke Kai. Widely regarded as the most prestigious event in long-distance paddling—forty-one miles from Moloka‘i to O‘ahu—it is also one of the most expensive. The escort boat and registration alone cost $1,500. Add to that airfare, lodging, race gear, food, and energy supplements, and it’s a hefty fee for participation.

Some of us could have paid our own way, though for many of us it was unaffordable. Instead, the generosity of others—not just people signing over checks, but giving from the heart, island-style—made our trip possible.

It started with fundraising. Some groups do car washes. Our team learned the finer points of seasoning and stringing poultry under the tutelage of Uncle Ray of Ray’s Kiawe-Grilled Chicken. Uncle Ray let us take over his operation for a day. It’s hard for passersby to resist the aroma of huli huli chicken—an island favorite—as it’s roasting over an open fire. At the end of the day, we had raised $900.

Getting to Moloka‘i presented another challenge, as the flights were fully booked. Gale Berengue, the escort-boat captain of a rival canoe club, came to the rescue, ferrying my teammate and me over to Moloka‘i’s Hale O Lono Harbor on his trusty vessel Her. We paid him in homemade chocolate chip cookies.

In a gesture of pure Moloka‘i hospitality, Zachary and Henrietta Helm opened their Kaunakakai home to us—all twelve of us. (Our coach, Bobo, is friends with their son Carlton.) Auntie Etta stocked the icebox with water and Gatorade, and she prepared a giant pot of delicious turkey spaghetti. Uncle Zach told us tales about wandering deer and ghostly night marchers. We brought them gifts of huli huli chicken, Ted’s Bakery pies, and other goodies from O‘ahu. We shared home-cooked food and conversation, and that night before the race, we slept with full bellies and full hearts.

I observed this continuous flow of giving reciprocated by more giving. It resembled the teamwork that took us across the channel—stroke by cooperative stroke, and eventually we reached the other side.