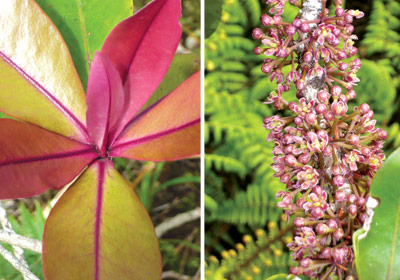 Each spring, the lovely kolea lau nui begins its parade of color. Tiny, tight-fisted buds emerge from gnarls along the tree’s grayish branches. Soon, sprays of pink-tinged stars are flirtingly visible beneath the tree’s glossy green leaves. After attracting pollinators, these diminutive blooms ripen into round, green or black fruits.

But that’s just the overture, the prelude to the passion play of kolea lau nui. Following nourishing rains, the tips of the branches flush with new growth. Far more fetching than the flowers, these young leaves, or liko, range from chartreuse to bright magenta, with a single scarlet vein running down the center of each. The contrast between green and rosy hues is a captivating sight in the forest.

Kolea lau nui grow up to sixty feet. Those with thicker trunks — surpassing a foot or two in diameter — are likely many hundreds of years old. Known to scientists as Myrsine lessertiana, this native Hawaiian species exists nowhere else on Earth. Hikers can find it in mesic and wet forests throughout Hawai‘i, from near sea level to elevations of 6,000 feet. But don’t despair if you need expert help identifying it; renowned botanist Joseph Rock noted that M. lessertiana is among the most variable in the genus; hardly two trees are alike.

Ancient Hawaiians found many uses for kolea lau nui. From its fine, strong wood, they carved gunwales for canoes, house posts, and anvils for beating kapa (bark cloth). They steeped kolea bark to make a rich red dye and used its charcoal for black dye.

Even in decay, the tree is useful. Kiwikiu, the Maui parrotbill, probes old branches for grubs. “This is one of the species that attract kiwikiu,” says Pat Bily of The Nature Conservancy. But what about the kolea, the Pacific golden plover that shares the tree’s name? Hawaiians often gave the same name to different species that shared some attribute. While this may have been the case with the two kolea, ethnobotanist Cathy Davenport doesn’t know of any cultural connection on record. Instead, she offers her own observation: pointed liko tips look precisely like the beak of the seafaring plover.