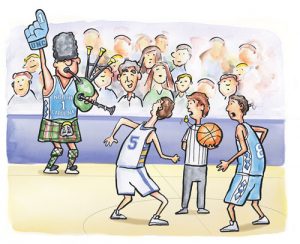 Back in the early 1980s, many of the things that would make Maui world-famous hadn’t happened yet.

Windsurfing was still in its infancy. Whale watching, celebrity golf and downhill bike cruising were still brand new. Fifty-foot “Jaws” had yet to be ridden. The full-body avocado wrap was still in development.

In sunny Lahaina, savvy event promoters were bouncing a new idea off the wall. Why not bring top-flight college basketball to Maui? And, more to the point, why not bring the game’s ardent fans here, too?

The promoters were privy to a well-kept secret. From late November through “March Madness” each year, millions of basketball fans follow the best college teams on TV, but only a few thousand can get tickets to an actual game. And those tickets do not come cheap.

“The only way you can get a season ticket at North Carolina these days is to make a donation to the university,” confided Tar Heels alum Roy Hill. “I gave the school $10,000 last year so I could buy a $2,500 season ticket. One year I even flew to London to watch them play. Now I’ve followed them to Maui.”

It’s this kind of fan-aticism that has for twenty-six years made the Maui Invitational a marquee college basketball tournament and a boon to the island’s economy. Held at the Lahaina Civic Center gym the week of Thanksgiving, the Invitational has become the preseason showcase for the nation’s top college  basketball teams. Only eight squads are invited each year, but what an eight!

The payoff for fans (and pro scouts) is watching on one floor over a single three-day period many of the country’s most elite players. Better yet, the Lahaina gym seats only 2,500. Visiting fans accustomed to being “rafter birds” in 25,000-seat Mainland arenas can hardly believe their luck.

“I love this Maui thing because it’s so intimate; you’re so close to the players,” said one Indiana fan at last year’s Invitational. “There’s not a bad seat in the place.”

That same year, near the Civic Center entrance, bagpiping brothers Zack and Josiah Burke trod a lonelier path, dressed in traditional kilts and leggings, topped off with matching jerseys in North Carolina blue. The tune they were playing sounded vaguely familiar.

“We figured it out on bagpipes one year,” Zack panted. He said the Burke family—three pipers and a drummer—had moved to Maui five years earlier from Burlington, North Carolina, so they’ve missed a lot of home games. But whenever the Tar Heels fly into Kahului Airport, the Burkes march out to greet them.

“In a perfect world,” Josiah mused a little sadly, “the team would hire us to travel around with them.”Like its predecessors, this year’s November 23–25 Maui Invitational showcases several Top 20 teams: Gonzaga, Cincinnati, Wisconsin, Vanderbilt and former national champs Arizona and Maryland. Colorado from the Big 12 conference and Hawai‘i’s Chaminade University round out the field.

I’ll see you there.