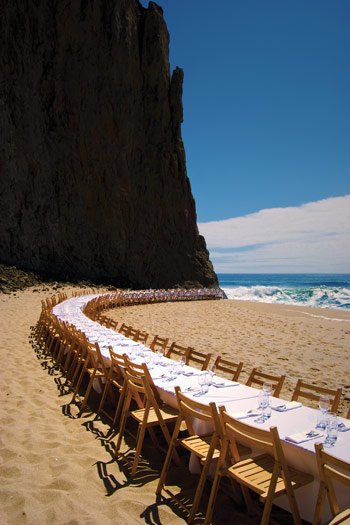 There’s an appealing nostalgia in the notion of gathering your friends together, traipsing into the country, laying out a spread of beautiful food, and lingering over heartfelt, wine-fueled conversation long into the night. But how often does that happen in our push-rush world?

About once a week, if you are an Outstanding in the Field farm-dinner groupie. Jim Denevan and his staff have been staging fresh-on-the-farm dinners since 1999, and as the images of their magnificently orchestrated moveable feasts and Denevan’s ephemeral artwork have appeared in news reports, special features, and magazines over the years, attendance at the dinners has swelled and diehard fans follow them around the globe. In January they are finally coming to Hawai‘i, for where better to set an alfresco table for 150 diners in winter than the land of rainbows and sunshine?

The original concept of Outstanding in the Field developed in the late nineties, when Denevan worked as a chef at Trattoria Primizia in Capitola, California, a job he’d taken after spending a few years abroad. Inspired by the cuisines he’d experienced in France and Italy, he visited local organic farms, riding a custom-built bicycle with a grocery trailer to source ingredients for his restaurant. He became preoccupied with the idea of connecting diners to the growing cycle of the ingredients on their plate, which led to the launch of his “roving culinary adventures.” “Farm to table” was already a familiar term, but Denevan thought “table in the farm” an even more appealing notion.

Infused with rough-hewn artistry, Denevan’s dinners offer a unique combination of sensory and psychological rewards. Food cooks on makeshift burners in the middle of a farmer’s field, and is served on tables hauled across the land by able-bodied volunteers. Guests enjoy multiple courses presented family style on plates they bring from home. (Organizers claim that having each participant bring something to the table creates a deeper connection to fellow diners and the food.)

Beyond the connections between the food on the farm and the meal on the plate, Denevan’s dinners link the people who grow the food to those who prepare it, and to members of the community who appreciate the fruit of all that labor. The ritualized celebration of these associations is what seems to have been lost in the modern world, and is what Outstanding in the Field delivers so beautifully. While it’s true that, for $190 per person, one could find fancier food, more comfortable seating, and rarer wines in any number of fine-dining establishments, the irresistible pull of the farm dinners seems to be the communion of spirits celebrating life at the source of nourishment, a staged but authentic response to a primordial craving. 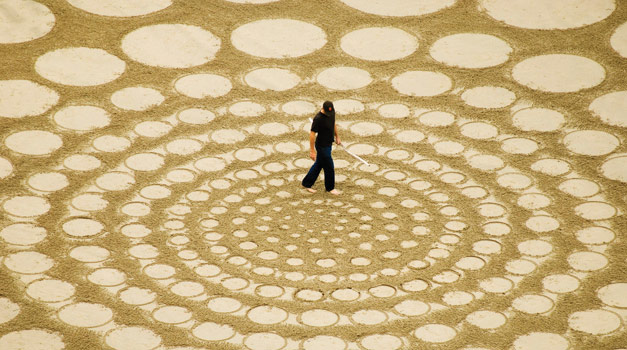 This craving may also be at the heart of Denevan’s artwork. Besides his prowess as philosopher, chef and entrepreneur, Denevan uses rakes, sticks, brooms or bedsprings to create imaginative statements in sand, earth and ice—an artistic expression he developed to overcome a sense of helplessness when his mother was diagnosed with Alzheimer’s. He typically spends the entire day drawing designs on swaths of beach—designs so large, they’re visible from space—only to have them washed away when the tide rolls in. (Rumor has it that Maui may be his next canvas.) Much like the dinners he arranges, the results are ephemeral, but the memory lingers long.

Tasked with the honor of preparing Maui’s fête is Chef Justin Pardo of Market Fresh Bistro, Makawao. Outstanding in the Field recognized the environmentally minded chef in June 2011, citing his dedication to sourcing locally fresh ingredients, which also won him the 2011 ‘Aipono Award for Excellence in Sustainability.

“I’ve been buying my produce from organic growers ever since we opened,” Pardo told me over lunch at the restaurant he owns with his sister, Olivia Coletti, and partner, David Magenheim. 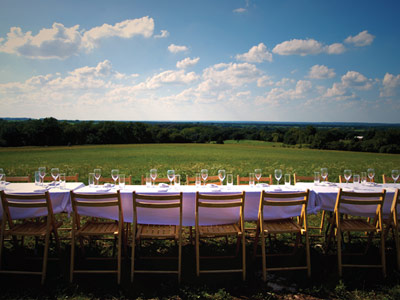 From the start, Olivia added, “we wanted to prove we could serve exquisitely prepared food that’s locally sourced” and fairly priced. Plus, fresher tastes better. “We ate some beef the other day that had been butchered that same morning at Thompson Ranch. It tasted like no beef you’ve ever had.”

The trio’s dedication to the land and the people who live on it makes them the perfect partners for Denevan and crew. Spend an hour lunching at Market Fresh Bistro and you’ll likely witness a local farmer hauling in a box of freshly picked vegetables, or a rancher hefting boxes of Maui beef onto the stainless-steel countertops in the chef’s kitchen.

Preparations for the Maui banquet have been under way since last summer. With just a few guidelines, the chef was given free rein in designing the menu. Pardo placed special orders with local farms, growers and ranchers who have been plotting their best harvests for the occasion since then.

“I plan to barbecue a pig for the Outstanding in the Field dinner,” Chef Justin revealed. “It’s a multistep, time-consuming process, where you roast it, debone it, press it, so that the cracklings become as crisp and delicate as the crust on a crème brûlée, while the meat inside is moister and more succulent than anything you’ve ever tasted.”

In spite of the long preparation, most of the dishes will be determined by what’s available and best on the farm at the time, which is also how the chef approaches his twice-monthly wine dinners at Market Fresh. His primary supplier and partner in produce has long been Kupa‘a Farms in Kula, run by Gerry Ross and Janet Simpson, whose coffees have been named best on Maui for two years running. The farm also grows a wide variety of produce and, most importantly, will provide the pastoral setting for January’s monumental meal.

“Part of the magic of an Outstanding in the Field dinner is having the people who grow and raise the food sitting next to the guests at the table, and chatting about their life and work to a very interested audience. Many farmers tell us how amazing it is to see the response and appreciation from the guests, as they normally don’t get much recognition,” explains Sara Burns, director of international development for Outstanding in the Field.

For all the farm workers, growers, diners, cooks, earthworms, and bumblebees that work through sunshine and rain so that we may thrive, let us raise a glass and enjoy a convivial laugh or two when Outstanding in the Field comes to Maui.