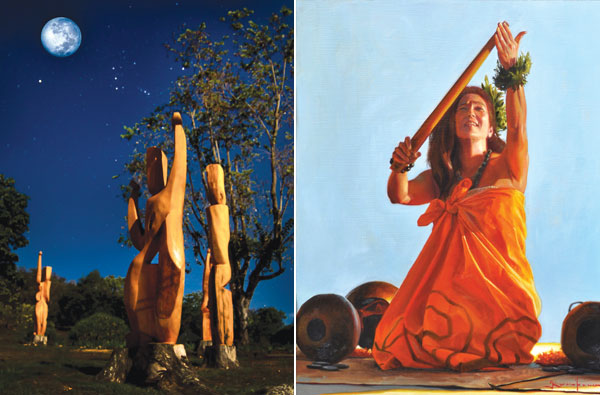 When Maui sculptor Tim Garcia visited Gordean Bailey’s hula troupe, Halau Wehiwehi O Leilehua, in 2012, it was to immerse himself in hula, the theme of that year’s Celebration of Hawai‘i, an annual exhibition hosted by Viewpoints Gallery in Makawao.

“I sketched the dancers and talked story with Gordean and her halau,” Garcia recalls. “I absorbed theirmana [spirit], and especially made a powerful connection with Gordean’s peace and calm.”

He says that connection helped inspire one of his most important works: the transformation of a circle of trees near ‘Ulupalakua Vineyards’ tasting room — trees honored in the history of hula because that was where King Kalakaua loved to come and watch dancers perform.

After a storm in 2012, arborists said that the century-old trees were doomed, but rather than cut them down entirely, ‘Ulupalakua’s owners invited Garcia to sculpt them. Bailey’s dancers suggested how to express the essence of hula, the lines of the arms, the positions of the feet, in the tree trunks. More importantly, Garcia learned from Bailey, in her words, how to “ask permission” from the trees. The artist says that because he acknowledged the honor of working with the trees, “people went from being surprised at the idea of the carving to embracing it.”

All of which pleases Joelle Perz mightily. Viewpoints Gallery’s artistic director and coordinator of Celebration of Hawai‘i, Perz says the mission of this invitational exhibit “is to encourage artists to connect with the host culture and understand it in depth.”

In each of the past eight years, Viewpoints has selected a different aspect of Hawaiian culture — kapa, hula, the land —and invited up to fifty artists to experience the truths and cultural values connected with that theme. Artists are invited to spend time with cultural practitioners, then interpret what they’ve learned in their chosen mediums: paintings and photographs, stone carvings, woodwork, jewelry, ceramics and glass.

Those who participated in last year’s Celebration of Hawai‘i “had a better understanding of where hula comes from,” says Bailey. The resulting art “had more truth to it.”

Last year, Bailey’s halau presented an evening of hula. They’ll do so again for the 2014 Celebration,whose theme, Ho‘olohe I Ke Kai (“Listening to the Ocean”), will blend science and soul, cultural relevance and environmental stewardship. “This time it will be not just dance, but the shells, the colors and chants of the ocean . . . adornments from birds and fish,” says Bailey.

University of Hawai‘i marine biologist Donna Brown will also take part in this year’s exhibition, whose aim is for artists and viewers alike to become more aware of Hawai‘i’s environmental resources and rich cultural heritage.