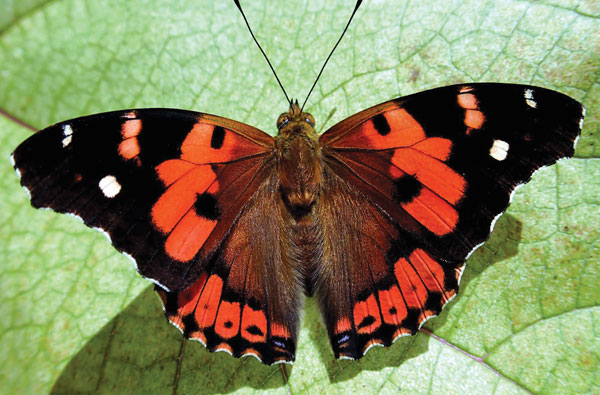 Butterfly hunting is back in vogue here. Instead of netting the jeweled fliers, the goal is to capture data about one special species: Vanessa tameamea, the Kamehameha butterfly. Entomologists fear this endemic butterfly, our official state insect, may be disappearing from forests. They’re asking the public to help map its current range.

The Pulelehua (Butterfly) Project incorporates volunteers’ butterfly sightings into a database that will create a more complete picture of the species’ habits. Both expert and novice butterfly hunters are welcome to participate. First, familiarize yourself with the Kamehameha butterfly’s life cycle.

Each stage is spectacular. Viewed under magnification, the Hawaiian butterfly’s eggs are as mystifying as distant planets. Females lay these miniscule, transparent spheres on native mamaki (Pipturus albidus) leaves that will later feed and shelter the caterpillars. After hatching, the fuzzy, resourceful larvae hide from predators in makeshift tents of their own design: they slice a crescent into the leaf they rest on, fold the flap over themselves, and fasten it with silk. When the itch to transform overtakes them, they create a chrysalis and hang from a twig. They emerge as brilliant orange aerial acrobats, speckled with white and black. Look for mature butterflies, eggs, caterpillars, and cocoons when hiking in native Hawaiian forests.

Kamehameha butterflies are not officially endangered, but they’re not easy to find, either.  With their wings closed, they look like brown leaves; only when they alight from their perch to fly do you see their magnificent orange.

These cryptic fliers prefer rainforests rife with mamaki and nectar-filled flowers. And according to Francis Williams, who studied and reared V. tameamea in the 1920s, they have “a particular fondness for resting on the trunk and limbs of rugged old koa trees.”

It might be the sap that draws the butterflies to koa trees. Sam Gon III, a biologist and cultural advisor with The Nature Conservancy, has seen multiple butterflies, mostly males, congregating at sap fluxes.  Fermenting sap produces an intoxicating bubbly ooze.  The butterflies get tipsy and chase each other around the treetops.