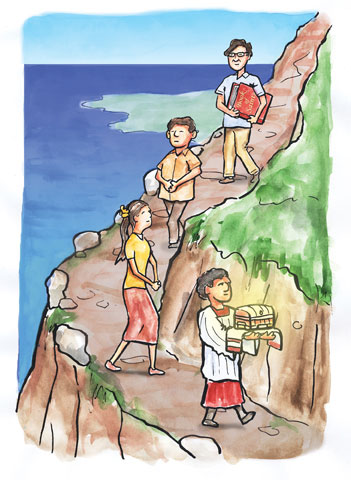 I think I’ve examined that famous blurred and mottled photograph of Father Damien of Moloka‘i a couple dozen times.

It was taken in 1889, shortly before he died at age forty-nine from Hansen’s Disease (that Biblical pestilence formerly called leprosy) at one of Hawai‘i’s most tragic, but finally redemptive, places, Kalaupapa.

Isolated between a 1,600-foot cliff and a coastline battered by deadly surf, the peninsula became a de facto prison for a population whose “crime” was contracting the disease.

I’ve been thinking about Damien, because on October 31, as a reporter for The Maui News, I’ll accompany students from Damien Memorial School as they carry the reliquary, an enclosed box with one of the priest’s disentombed anklebones, down the steep pali trail to Kalaupapa, the penultimate stop on a procession around the Islands that will end at the Diocese in Honolulu.

I imagine some people will view that procession as archaic, maybe even a little macabre. Not me. I don’t claim to be an expert on the saints, and it’s been a while since I’ve given a confession. But having grown up Roman Catholic, I understand the hubbub in Hawai‘i over Damien’s canonization into sainthood, which takes place October 11 in Vatican City.

St. Paul never lived in my home state of Minnesota. No saint did. For the first time in my life, I reside in a place that has the Catholic equivalent of a local hero.

I was taught by my parish, my Italian mother and my dictionary-sized book of saints that God chooses certain people to demonstrate His power and love through miracles, carrying on the tradition of Jesus Christ, and sharing His sacrifices.

As a kid, I couldn’t help but compare the saints to my comic-book superheroes—especially since the most famous ones lived before photography, so the only images we have of them are drawn or painted. Like any self-respecting superhero, saints always stood for honor and justice—at least eventually. Even St. Paul, whose job was to hunt down Christians, changed his ways once he became an apostle.

And miracles, a prerequisite of sainthood, could be as cool as any super power. I mean, think of being able to communicate with animals, like Francis of Assisi!

Even if you don’t believe in miracles, you have to admit that the saints could exhibit an almost superhuman courage. How many of us would be willing to be burned at the stake for the sake of our faith?

As I grew older, I came to appreciate the saints for their incredible humanity as much as for their bravery. Take Father Damien. A tough-minded former carpenter, he built much of the village and infrastructure at Kalaupapa; and brought order to a lawless place, love to the most ostracized people in Hawai‘i’s history. He personally administered care to his afflicted flock, ignoring precautions that would diminish that human connection . . . and when he himself contracted the disease, he reportedly used that fact to convince his order and benefactors to send more supplies.

The beauty of this wild and rugged coastline hasn’t changed much since Damien’s day, but life here has, dramatically. By the 1960s, medical advances had made Hansen’s a curable and preventable disease, ending for good the practice of lifelong quarantine that had ripped husbands from wives, parents from children, for more than a century. Had Damien lived today, he could have ministered to Kalaupapa’s inhabitants without fear for his own life. Then again, Damien wasn’t afraid. He did what separates saints from the rest of us mere mortals: He saw a human need and acted.

I may no longer be the most devout Catholic, but being invited by the National Park Service to cover this event makes me feel electric. Jozef de Veuster, the Belgian priest known as Father Damien, is being named the patron saint of charity martyrdom.

Even the Green Lantern never did anything that big.